Walker recently received a PhD in physics from the University of Georgia and now works as a postdoc at L’Université du Havre in France. He is the first-ever winner of the Laboratory Astrophysics Division’s inaugural Dissertation Prize. His prize lecture, “Molecular Collisional Excitation in Astrophysical Environments,” will be on his outstanding doctoral dissertation. 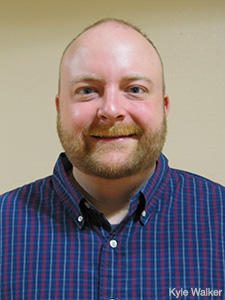 Walker knew from a young age that he wanted to do physics and astronomy. He was never satisfied when he didn’t have an answer, which translated very well to his research experiences. As an undergraduate, Walker did research in observational astronomy, including an REU at Cerro Tololo in Chile. He continued doing observational work for his master’s degree, where he studied the atoms and molecules (“species”) in the interstellar medium. Finally, in graduate school, he continued to study the interstellar medium, but he began approaching it from a computational and theoretical standpoint.

Walker’s award-winning thesis is the culmination of this theoretical work, in which he studied environments that are not in (local) thermodynamic equilibrium. An environment in “thermodynamic equilibrium” is one where entropy is maximized, so that a Boltzmann distribution can be used to describe the states of particles (at least on “local” scales, within a certain neighborhood). In these environments, collisions between particles dominate, so that particles are able to equilibrate to their surroundings. However, the interstellar medium is not in local thermodynamic equilibrium, so rate coefficients—which dictate how quickly reactions between different species occur (see, for instance, Ch. 5 of this article)—are needed to produce models of its physical properties (such as chemical abundances).

Walker used computational techniques to effectively solve the Schrödinger equation for these rate coefficients; for instance, he studied in depth the internal distribution of energy levels for reactions between molecular hydrogen (H2) and carbon monoxide (CO). Walker’s current work in Le Havre continues to study the chemistry of such systems, focusing on molecular structure calculations that determine the energy of these systems.

Walker’s biggest piece of advice for students in astronomy is that “it’s not a race.” He personally does not recommend taking a break between a master’s and a PhD program, as he did, but it ended up working very well for him. He was able to teach at a community college for a year, where he discovered a passion for teaching. (Dr. Walker is now looking for a teaching job, in case anyone’s interested!)