In today’s post, we present our conversation with another young scientist, Dr. Carolyn Kuranz, who is trying to understand familiar astrophysical phenomena occurring in our universe by studying in detail the elusive plasma processes underlying them. To accomplish this, Dr. Kuranz conducts complex laboratory experiments using some of the biggest and most powerful laser facilities in the world. 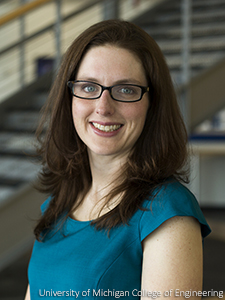 Kuranz is an Associate Research Scientist at the University of Michigan, which is also where she received her PhD in Applied Physics from in 2013.  She is the receiver of this year’s LAD Early Career Award presented by the Laboratory Astrophysics Division “for [her] seminal laboratory experiments in hydrodynamic and radiation processes relevant to astrophysical dynamics”. Kuranz uses isolated high-pressure plasma environments to understand the physics of several space occurrences, such as accretion, supernova shock waves, and magnetized jets. In the past, she has been the experimental lead scientist for the Center for Radiative Shock Hydrodynamics at the University of Michigan, and has utilized state-of-the-art facilities such as the Omega Laser Facility at the University of Rochester and the National Ignition Facility in California. Over the last few years, Kuranz has conducted a combination of theoretical as well as experimental studies to model the dynamics of high-pressure plasmas, and is now the founding chair of the Jupiter Laser Facility User Group at the Lawrence Livermore National Laboratory, which provides world-class support to the community of high-pressure or high-energy-density science researchers.

Kuranz pursued Physics as her undergraduate major, during which time she got an opportunity to tour the then-newly established National Ignition Facility. Fascinated by the grandeur of the facility, and the scientific body of work that it would potentially support, Kuranz decided to attend graduate school to do research in the field of plasma physics. Following the advice of one her undergraduate advisors, Kuranz decided to attend UMich for graduate school, and there has been no looking back for her since then.

Reflecting back on her own time as a graduate student, Kuranz advises rising students, especially new graduate students, to take the time to figure out the kind of research environment that they can thrive in, and choose a lab or research group accordingly. “Sometimes students end up feeling that research is not for them”, she says, “when it might just be the environment of the group that they are a part of.” As our conversation drew towards an end, Kuranz expressed her parting thoughts on the matter of work-life balance in the context of raising a family simultaneously while pursuing a PhD. Drawing from her personal experience, Kuranz expressed, “I had two kids while I was attending graduate school… and everything worked out just fine.”

To learn more about Kuranz’s ongoing work and prize-winning research, don’t forget to check out her talk on Wednesday June 7th, 2 pm at the 2017 LAD Annual Meeting held in conjunction with the #AAS230 in Austin, Texas.