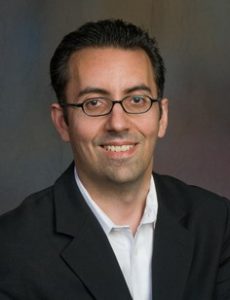 That’s where Dr. Robert Fisher comes in. Fisher, a physics professor at the University of Massachusetts Dartmouth, tries to figure out how these white dwarf explosions happen. He will be giving a plenary lecture at #AAS231 on “The Fate of Exploding White Dwarfs,” in which he will discuss the mystery of Type Ia supernovae.

A Type Ia supernova (or thermonuclear supernova; Figure 2) is a violent explosion caused when a white dwarf undergoes runaway nuclear fusion. These supernovae are used as “standard candles” in measuring astronomical distances—they were even used to measure the accelerating expansion of the universe!

However, the actual explosion mechanism behind these Type Ia supernovae isn’t well understood. Previously, the leading model for Type Ia supernovae suggested that an explosion would occur when a single white dwarf accreted matter from a companion star and reached a limiting mass. This limit of ~1.4 times the mass of our sun, called the Chandrasekhar mass, is set by the quantum mechanics and special relativity governing the electrons in the white dwarf. 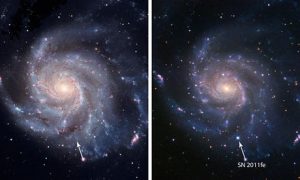 Figure 2. SN2011fe in the Pinwheel Galaxy, an example of a Type Ia supernova. Credit: Bj Fulton/PA

Unfortunately, it turns out that this classical model doesn’t quite match observations of all Type Ia supernovae. Fisher will discuss some of these discrepancies in his talk, as well as alternative Type Ia supernova models—for instance, having two white dwarfs merge (see Figure 3), or inducing explosions in lower-mass white dwarfs. His group at UMass-Dartmouth works on computational simulations of these alternative models and compares them to observations. 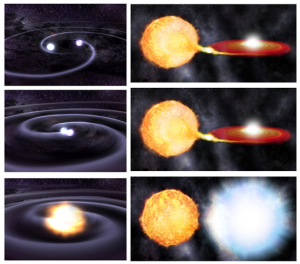 Fisher hasn’t always studied the deaths of stars. He started out as an undergraduate physics major, trying out several different areas of physics and astronomy. For example, Fisher spent one undergrad summer internship working on computational models of common-envelope stellar evolution. Although unrelated to his current research, it gave him “a taste of what this research area [computational astrophysics] was like.”

He didn’t settle on computational astrophysics just yet, though. During his first year of graduate school, Fisher started out in observational cosmology before deciding it “wasn’t [his] cup of tea.” He transitioned back to simulations and worked on computational models of star formation for his Ph.D. thesis. Finally, during his postdoc appointments, he started shifting to his current work on thermonuclear supernovae.

While starting research early helped Fisher try out different subfields, it also taught him skills that proved useful later on in his career. As Fisher says, “Research is a lot about ideas, but there’s also culture—there are a lot of professional aspects to giving talks and getting acquainted with the language and the culture associated with astronomy,” and undergraduate research helped expose him to those aspects early on. (Shameless plug: If you’re interested in undergraduate research, check out this great Astrobite about ways to get started!)

Interested in learning more about Dr. Fisher’s work? Come check out his plenary talk at 11:40AM on 12th January at #AAS231!