A first glimpse into deep Jupiter

When we gaze upon the night sky, we can often spot Jupiter. We have also launched several missions to explore Jupiter, like Pioneer, Voyager, and Galileo. Yet all we have “seen” stops at the cloud tops. Now our understanding is going to change by NASA’s Juno mission, which provides us the privilege to have a glimpse through the clouds. The primary science goal of Juno is to measure the deep composition and internal structure, so that we can better understand the formation and evolution of Jupiter and planetary formation in general. Juno takes elliptical orbits around Jupiter to minimize the damage from the radiation belt. Once every 53 days, Juno accomplishes a close flyby and takes as many photos as possible. Today’s paper brings some exciting new results from first few close passes of Juno probe. 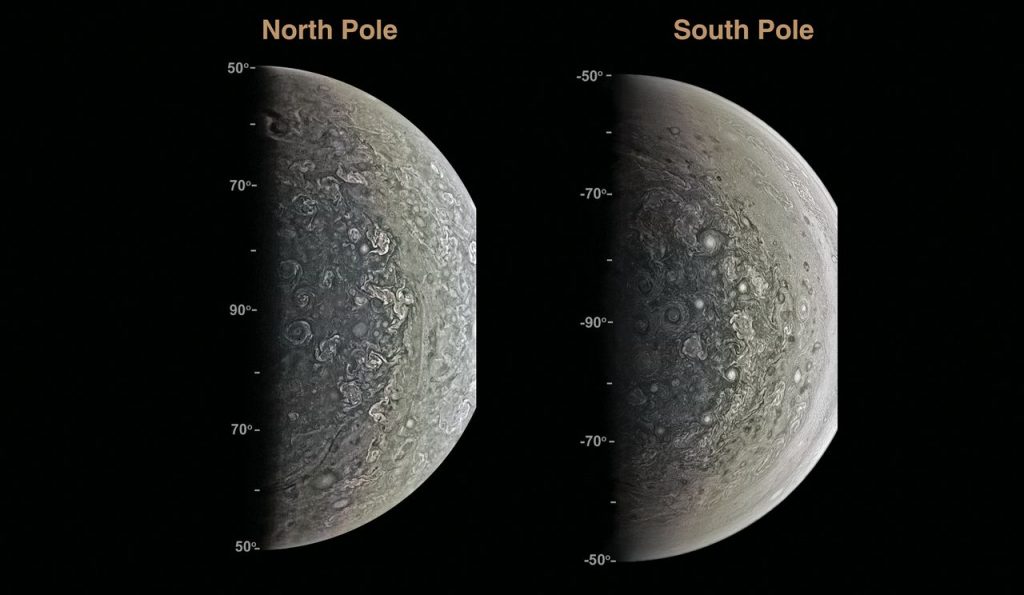 Figure 1. The close-up, three-color images of the north and south poles of Jupiter obtained 27 August 2016. The circular features are cyclones, range from 200 to 1400 km in diameter. Source: featured paper.

Before Juno, we never had a close look at Jupiter’s polar regions. Figure 1 shows the snapshots of north and south poles taken by the visible-light camera, JunoCam, with a resolution of 50 km. From this amazingly detailed image, we see that the familiar band and belt zonal structure vanishes at about 60° latitude. It is replaced by ovals and spiral-like features, which are revealed to be cyclones and waves in the temporal sequence of shots. It is now very interesting and challenging to explain the dynamical transition from bands to cyclones and the differences from Saturn’s poles (e.g. Saturn has north polar hexagon). 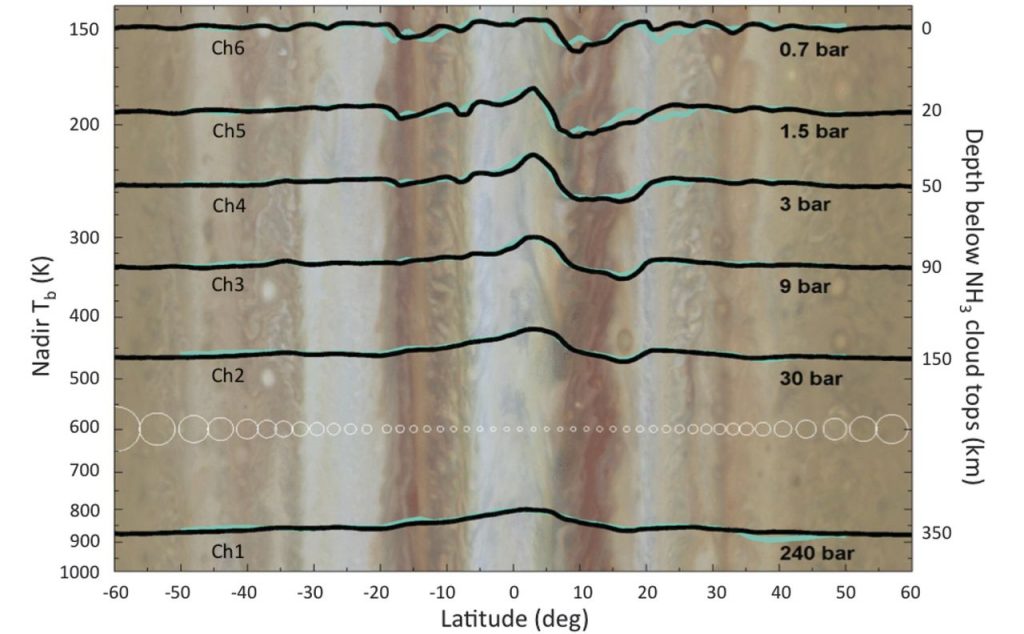 Figure 2. Jupiter’s brightness temperatures for all six channels, obtained during Juno’s first two passes of Jupiter in 2016. The brightness at each wavelength depends on the mean temperature of the atmospheric layer where the main emission is from, which in turn is determined by the molecular absorption. The frequencies of channels 1 to 6 are 0.6, 1.2, 2.6, 5.2, 10, and 22 GHz, respectively. The white circles indicate the footprint sizes for channels 3 to 6. Source: featured paper. 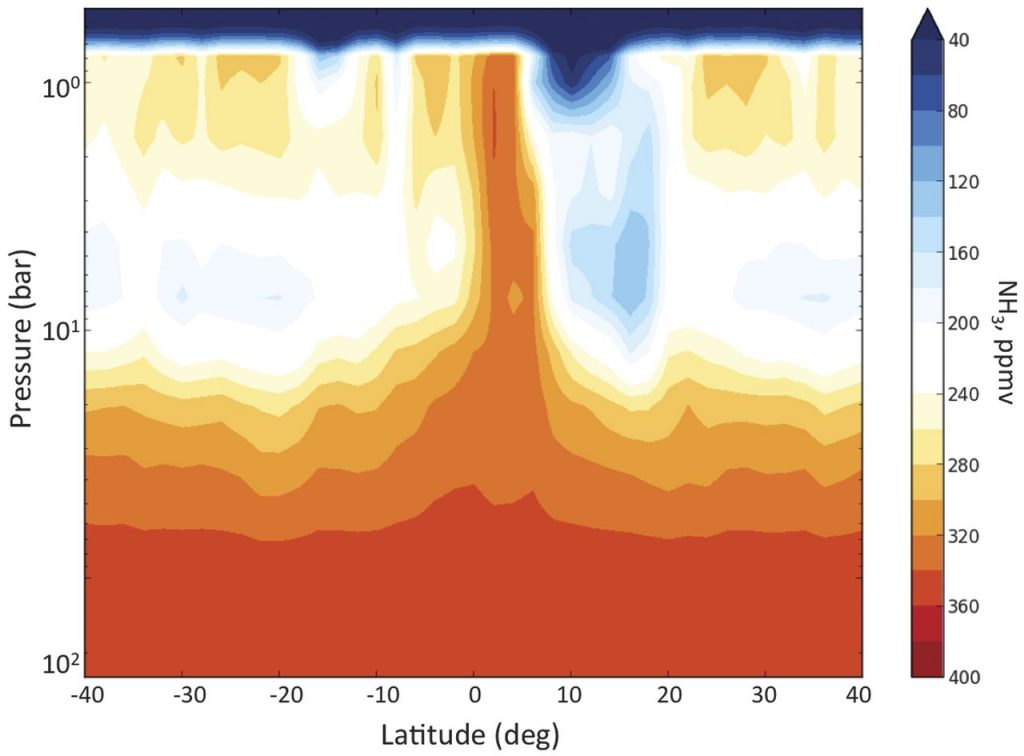 Figure 3. latitude-altitude map of ammonia: The blue band at the top is where ammonia is condensing and the abundance is low. The high abundance at the equator is interpreted as it is transported from the deep atmosphere at pressures of 100 bars or more. Source: featured paper.

MWR (the microwave radiometer) measures the thermal emission coming from below the cloud deck, which provides very powerful eyesights through the clouds with its large antenna. Figure 2 displays the brightness temperatures measured by MRW at different wavelengths, corresponding to emission flux from different depths. The team argues that the ~50 K variations of brightness temperature are not due to physical temperature since the equatorial wind would have been much greater in that case. Instead, they are caused by the variations of microwave opacity, and ammonia is the dominant microwave opacity source. Therefore, the authors work out a global ammonia abundance that best matches the observed brightness temperatures, as shown in Figure 3. Again, surprisingly, ammonia is not well-mixed, as predicted by the equilibrium chemistry. There is an equatorial plume lifting ammonia up and descending at higher latitude, resembling a Hadley cell on Earth. If the ammonia distribution is indeed driven by the circulation below the cloud layer, we definitely need some new ideas and models to understand what drives the circulation!

By measuring the Doppler shift of radio signals, Juno can also set constraints on Jupiter’s gravity field. What they found now is the current interior models do not agree precisely with the Juno data. These can be contributed to several uncertainties such as the equation of state for hydrogen-helium mixtures, the presence of a core, the assumption of an adiabatic interior, and the differential rotation (different part of the body at different latitude/depth rotates with different angular velocity). We would get a better handle on this with further Juno measurements of smaller components of the gravity.

It is usually more exciting to see unexpected things. What Juno has found so far hints us that our models of giant planets may be a little too oversimplified. Juno will continue more close passes around Jupiter until 2018, so we can expect more surprises and puzzles to come!