These aren’t the bursts you’re looking for

Using the intermediate Palomar Transient Factory (iPTF), a broadlined type Ic supernova (Bl-Ic SN) was accidentally uncovered during follow up observations of the newest gravitational wave in town – GW170104 .  Further investigation of iPTF17cw suggests it is the first discovery of a candidate relativistic BL-Ic SN discovered independently of a gamma ray trigger. Today’s bite presents the discovery, classification and follow-up observations of this fascinating supernova.

On the 4th of January 2017, the ripples in space-time created by two black holes merging were detected by the Laser Interferometer Gravitational-Wave Observatory (LIGO).  This detection resulted in a call to scientists around the world for follow-up observations, with the aim of locating an elusive electromagnetic (EM) counterpart. Observations undertaken by the extensive iPTF, a fully-automated survey measuring a region almost 40 times the size of the full moon, revealed a candidate event. 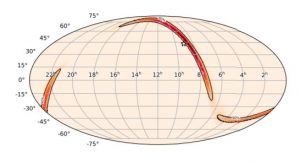 Figure 2: The location of iPTF17cw, indicated by the star, superimposed on the likely origin of GW170104 as determined by LIGO. Black contours indicate the 90% credible region. Figure 1 in the paper.

Dubbed iPTF17cw, the event originated outside of the 90% localisation area of the gravitational wave, shown above in Figure 1, allowing scientists to quickly rule out the two events as being related.

With the gravitational wave scenario ruled out, scientists moved towards the event being a SN. At the time of its discovery this SN had a magnitude of R = 19.5 mag, but was not visible during observations of the same field taken in December. Therefore several follow-up observations of the source were made to work out what had caused this burst of energy. 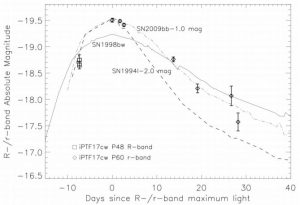 The authors note several interesting features in their observations including the detection of crucial narrow emission lines, such as those created by hydrogen, allowing for a redshift of z=0.093 to be calculated. Several broadline features were also observed, causing the team to classify the supernova as a type Ic SN. Type Ic SNe are a subclass of SN described as engine-driven, meaning they’re commonly associated with Gamma Ray Bursts (GRBs).

GRBs are short-lived, energetic explosions of gamma-rays which are the brightest known events in the universe. Their origin, however, is not well understood, but the most likely cause is a star collapsing to form a neutron star or black hole – a supernova! GRBs are relativistic because they eject particles at speeds comparable to the speed of light; as a result, they fade on timescales of a few days, whereas the afterglow of a SN is known for its longevity, shining brightly for hundreds of years.

The link between GRBs and broadline type Ic supernovae has been established for over twenty years, yet it is still uncertain why some supernovae emit jets of energetic particles. This jet-like behaviour is observed in the X-ray and gamma ray regime, meaning beams must be directed towards Earth to be observed. Moreover, a small portion of SNe discovered to have relativistic jets lack GRB components. It is unclear whether these events could be a new population of events that exist somewhere in the gap between SNe and GRBs, or if we’ve just missed key observations due to technological barriers. To establish whether iPTF17cw is relativistic and associated with a GRB, the team moved towards multi-wavelength observations of the surrounding area.

Using the Very Large Array (VLA) observations of the iPTF17cw were made over a 3 month period, yielding a faint point-like radio source at 6 GHz. Because of its point-like nature, it’s unlikely to be caused by star formation occurring in the host galaxy. 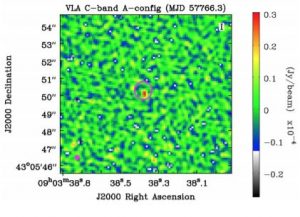 Figure 4: VLA observations of iPTF17cw, red point-like source in the centre, at 6 GHz. Figure 6 in the paper.

The team then investigated the X-ray regime with the Swift Satellite and Chandra X-ray observatory to search for counterparts, but only detected X-rays with Chandra. This was not a confident detection, yet its location is consistent with the optical and radio counterparts of the burst.  Next, the Fermi and Swift catalogues were searched to find possible gamma-ray counterparts. A candidate match, a gamma-ray burst lasting 30s called GRB 161228, was uncovered.

Analysis of multi-wavelength data suggests that GRB 161228 and iPTF17cw are likely to be related. The rate of Fermi GRBs falling within the region of GRB161228 was estimated to be 0.05 per month, meaning a chance coincidence of the events occurring but not being related has a probability of around 5%.

Is this a new kind of SN?

Most of the conclusions drawn for this SN rely heavily on comparisons with previous events, such as similarities in light curve shown in Figure 3. There are clear agreements between the engine-driven SN1998bw and relativistic SN2009bb, which further suggest iPTF17cw and GRB161228 are related. 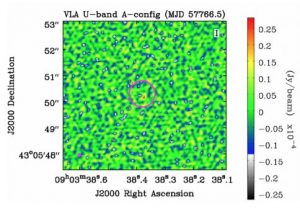 Figure 4: VLA observations of iPTF17cw at 14 GHz. No detection was found. Figure 6 in the paper.

Finally, this SN was not detected at 14 GHz radio frequencies, suggesting that the SN is relativistic because it faded very quickly at this more energetic frequency. This 14 would put this SN in a rare category: relativistic and discovered independently of  gamma-rays. Follow-up observations with the VLA are crucial to confirm iPTF17cw’s relativistic nature by confirming that the SN has also faded at lower frequencies.

Thanks to the iPTF many more BL-Ic SNe are now being discovered, and a greater sample will greatly improve our understanding of this weird phenomenon of engine-driven SNe. In fact the team expect to collect a sample of BL-Ic SNe in a year as large as the sample that has been collected over the last five years. It is only a matter of time before scientists conclude if a GRB counterpart is required, or if we have an extra category of events existing in the SN – GRB gap.