Early images of Europa, Jupiter’s fourth-largest moon, revealed an icy surface scarred with reddish stripes. Later observations by the Galileo spacecraft of distortions of Jupiter’s magnetic field near Europa hinted at the presence of a global water ocean beneath the ice shell. But how thick is the ice shell? And just how deep is the ocean? A Europa lander equipped with a seismometer might be able to answer these questions. A seismometer measures how much the ground moves as a result of seismic activity like earthquakes or volcanic eruptions. In this paper, the authors use statistical models of seismic activity and thermodynamical models of planetary interiors to estimate the seismic noise on Europa. With these estimates, we can begin to set basic requirements for the instruments that could one day measure the seismic rumbles of Europa’s ice shell.

Europa’s orbit around Jupiter is slightly elliptical, so the moon is subjected to tidal stresses of varying strength throughout its orbit. Models of the tidal stress on Europa indicate that it should induce cracks in the ice shell. These tidal cracking events, as well as turbulence of the ocean beneath the ice shell, will produce seismic noise. But how much?

To estimate the amount of ambient seismic noise on Europa, the authors use a statistical model of seismic events to determine how much seismic energy is released through tidal cracking. On Earth and the Moon, seismic events follow the Gutenberg-Richter law: a relationship between the magnitude of a seismic event and the number of events of equal or greater magnitude. By scaling the parameters observed on the Moon, the authors create a catalog of seismic events on Europa. They then uniformly distribute the mock events across Europa’s surface, and at random depths down to 2 km below the surface. Using this catalog and a model of how seismic waves propagate from the sources to a hypothetical detector placed at one of the poles, they generate a seismic record from which they can derive the magnitude of the ambient seismic noise. A sample week-long noise record is shown in Figure 2. 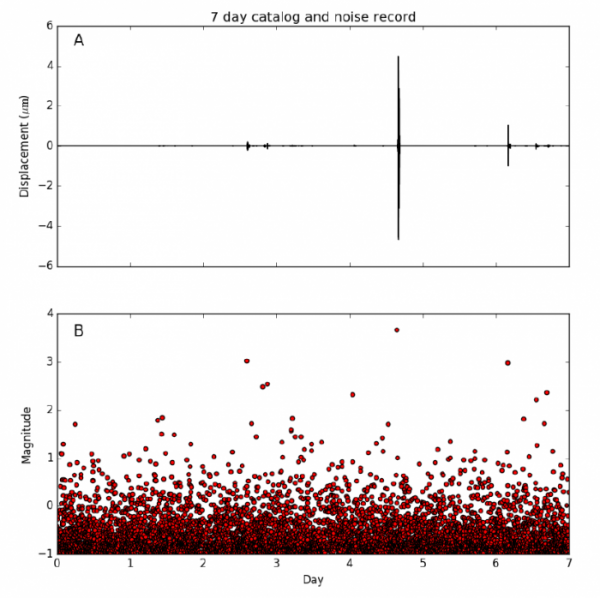 Figure 2. A sample noise record (top) and event catalog (bottom) for one week in model time. Magnitude is logarithmic, so the noise record is vastly dominated by the few large events. The much more frequent smaller events make up the background noise. (Figure 3 from the paper.)

The authors then use a signal processing tool to transform event catalogs and noise records like those shown in Figure 2 into a power spectrum (distribution of the power of a signal as a function of period) for the seismic noise. Figure 3 shows the noise estimates for four different models of Europa with different ice shell thicknesses and internal structures. In most cases, the seismic noise on Europa is below the sensitivity limit (dashed lines) of the detectors available today. However, some models show that the more sensitive instruments will be able to detect the average ambient seismic noise, and will thus certainly be able to detect much larger, but more infrequent, events. 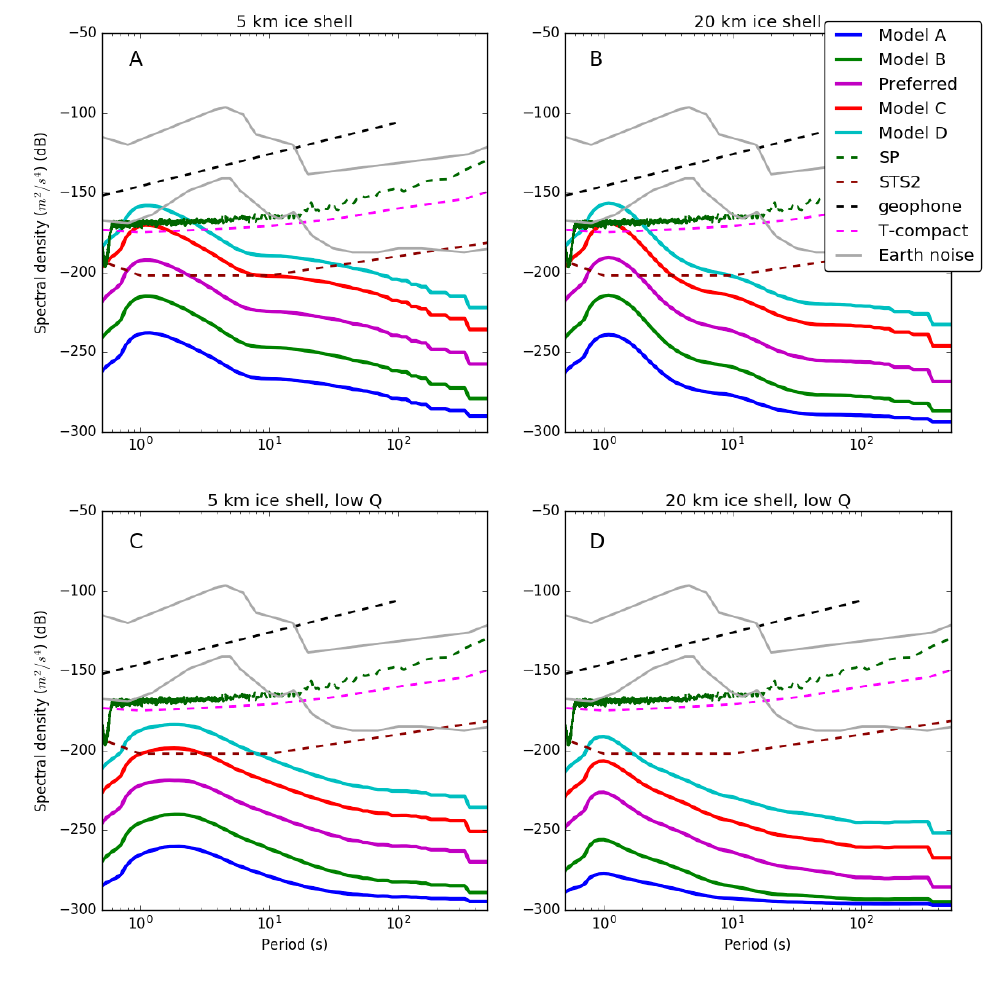 Figure 3. Power spectra for noise models with four different sets of parameters. The Q value is related to how strongly the waves decay as they pass through the ice (low Q means a high rate of decay). This figure shows that for most models (solid colored lines), the noise level is below the sensitivity limit of most instruments (dashed lines), although the most sensitive instruments will be sufficient in some cases. (Figure 5 from the paper.)

Probing the depths of Europa’s ocean

Even in absence of larger tectonic events, the ambient seismic noise could be used to determine the depth of the ocean using a technique called autocorrelation. Autocorrelation links a particular event to other, related events in a series that are separated by a fixed interval. In this case, the related events are the sequential signals received as a seismic wave repeatedly reflects off the bottom of the ocean. In this work, the authors show that autocorrelation of the seismic background is a feasible, albeit challenging, way to glean information about Europa’s global ocean without depending upon larger and less frequent seismic events.

Ultimately, the models are highly sensitive to input parameters and the results could depend strongly on conditions that haven’t yet been explored fully, like scattering of seismic waves by a layer of regolith. Europa enthusiasts itching to use seismology to crack the case will have to wait; there is no Europa lander mission currently underway, although NASA recently solicited input from the scientific community about possible instruments for a future mission. For now, we’ll have to settle for the promise of two missions set to launch in the 2020s: the European Space Agency’s JUpiter ICy moons Explorer (JUICE) and NASA’s Europa Clipper.