And now, the smallest star ever.

Continuing on our spree of reporting discoveries of superlative celestial objects (see this, for example), in today’s bite, I talk about the sighting of yet another one of those, the smallest star ever observed in our universe.

It starts with… Planets.

The search for exoplanets, especially familiar habitats like our Earth, is all the rage these days. One of the most successful efforts in this direction has been the advent of Kepler, a NASA discovery mission, that discovers planets using the ‘transit method’ i.e., by recording the obstruction of light coming from nearby galactic stars due to the passage of planets pass in front of them. To-date, Kepler (and its successor K2) have identified over 2300 planets, of which only about 30 happen to be Earth-like. This is because these planets, by the virtue of their small sizes, block so little light of their Sun-like hosts that the consequent dip in signal is effectively non-detectable at the current sensitivity of our instruments. To this end, the daunting task of finding these habitats has now driven scientists to turn towards stars that are much smaller (with masses below 1/4th the mass of the Sun), and are also, interestingly, the most common stellar objects to be found in our universe. But that alone doesn’t solve the problem. 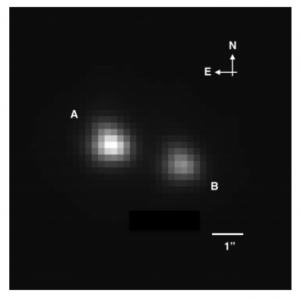 Figure 1. Focused image of the EBLM J0555-57 system by Euler telescope, resolving the bigger (A) and the smaller (B) objects. (Figure 1 in the original paper)

In order to ascertain the properties of exoplanets, an accurate knowledge of the physical parameters of their host stars is required (for e.g., the star’s mass is needed to calculate the orbital period of the planet using Kepler’s Third Law). However, for the populations of stars conducive to the discovery of Earth-like worlds, properties such as sizes and masses are less-reliably measured, and poorly understood. To remedy this, several motivated studies, including the one in today’s paper, are targeted towards studying the properties of stars occurring in binary pairs, particularly, eclipsing binaries with low masses (or EBLMs) with the goal of empirically constraining the stellar mass-radius relationship. Writing in today’s paper, Boetticher et al. report their results on the eclipsing binary EBLM J0555-57, and the smallest-ever detected star within it, named EBLM J0555-57Ab (henceforth ‘E-Ab’; see Fig. 1).

Incidentally, the first half of the story of E-Ab’s discovery follows the same trajectory as that of any other planet’s. The EBLM J0555-57 system, located about 600 light years away from us, was first identified by the planet-finding experiment known as WASP (Wide Angle Search for Planets), jointly run by the Universities of Keele, Warwick, Leicester and St Andrews. There, E-Ab was seen to pass in-front of, or ‘transit’, the larger star in the system, dimming the latter periodically, and masquerading as a planet.

Follow-up spectroscopic (radial-velocity) observations of the system from the CORALIE spectrograph (part of WASP) revealed that the detection was indeed a non-planetary false-positive, and the authors later used this data to evaluate the properties of E-Ab. The analysis incorporated two additional transit observations from the Euler and TRAPPIST telescopes respectively, which further enabled a complete physical modeling of the binary system. By obtaining a joint fit of these data to the theoretical model of a binary star system, the authors concluded that EBLM J0555-57 consists of a Sun-like star along with an eclipsing low-mass companion, the E-Ab, on a weakly eccentric ~8-day orbit. They establish E-Ab’s mass at about ~85x the mass of Jupiter, while the radius at only a tad bit larger than that of Saturn’s (see Fig 2), making E-Ab one of the densest known objects of its size currently known. 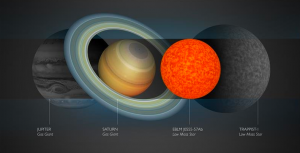 Figure 2. Size comparison of the newly-discovered star E-Ab with Jupiter, Saturn, and the TRAPPIST1 star. Source: University of Cambridge

So what makes this a star?

In view of their results, the authors noted that E-Ab sits at the low-mass tail of the stellar mass-radius relationship, and is located just above the ‘hydrogen-burning mass limit’. In simple words, this means that the E-Ab is right at the limit of how small stars can possibly be, and has just enough mass for its size to produce energy by fusing hydrogen fuel into helium inside its core. This is the same process that powers our own Sun, and is the property that separates stars from sub-stellar objects that do not have their own source of nuclear energy (for e.g., brown dwarfs, planets). Even at a marginally smaller mass at the same radius, E-Ab would not be able to sustain these fusion reactions, and would be a brown-dwarf instead.

Even though the authors did not evaluate the surface temperature as part of their study, they suspect that E-Ab would likely be among the coldest of stars, even colder than many of the giant planets detected so far. At such low temperatures the stellar surface would be highly dim, making populations of such low-mass stars extremely hard to detect. Hopefully, just as in the case of E-Ab, the techniques developed for finding extrasolar planets would lend themselves to the search for more and more low-mass planets in the future, and advance our understanding of their properties. As remarked above, achieving this goal will in turn act as a stepping stone in the feat of increasing the current census of Earth-like planets.

Making Order Out of Chaos