The Mass Controversy of Retired A-Stars

There’s an old saying, sometimes called Segal’s Law: “A person with one watch knows what time it is; a person with two is never sure.” Today’s paper concerns a similar problem in astronomy. The authors were measuring the masses of a certain group of red giants called “Retired A-Stars”. They find that these stars are less massive on average than previous measurements which used different techniques, enough to suggest that there’s a problem– either with the technique used in today’s paper, or with the previous technique. 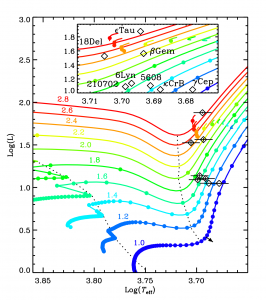 Figure 1: Models of retired A-star evolution for a range of stellar masses, from 1 solar mass (at the bottom) to 2.8 solar masses (at the top). For each track, the filled points represent 50 million years of evolution. As can be seen, the higher mass stars evolve much faster. This is Figure 1 from today’s paper.

When stars come towards the end of their life, or “retire”, they go through a phase in which they grow into giants. The nature of a giant star depends on the mass it had before it grew into a giant. The type of stars today’s authors studied are “retired A-stars”: giants which evolved from A-class stars. A-class stars begin life with approximately 1.4–2.1 times the mass of the Sun—in other words they are high mass stars, but not the highest mass stars around. Retired A-stars are particularly interesting because several exoplanets have been found around them.

To some degree, planets seem to look like the star that they form around. We’d like to understand this relationship better, as it should help us to understand planet formation. The trouble is that studies of this relationship so far have tended to focus on stars that are roughly the mass of the Sun or lighter, as this is where the bulk of planets exist. Several teams have tried to see if this same relation is true for higher mass stars as well by studying the masses of exoplanet-hosting retired A-stars. However, this has proved more controversial than expected.

The mass of a star leaves an imprint on the star’s spectrum,  which means we can measure it by comparing a spectrum of the star to model spectra. Of course, this method relies on the models used being reliable; if the models are off, the mass we measure will be off as well. Indeed, this is what happened. The masses measured in the original study were called into question by a later study, which argued that the derived masses were higher than you would expect—higher-mass stars pass through and leave the giant phase faster, so you would expect the population of retired A-stars to be dominated by stars at the lower end of the spectrum (see Figure 1). Several follow-up papers have been published, but the issue is still not resolved.

The mass-measuring method used by those historic papers—we can call it the ‘spectroscopic method’—is not the only way to measure the mass of a star. Another comes from asteroseismology, the study of how stars pulsate. These pulsations are caused by ripples moving through the star, causing it to appear to expand and contract by a tiny amount. We can predict the frequency of these contractions without knowing very much about the star at all—all we need to know is its mass, temperature, and luminosity. The latter two are relatively easy to measure if you know the distance. Therefore, if you measure the star’s pulsation frequency you can estimate its mass. We can call this the ‘seismic method’.

Today’s authors did this for eight retired A-stars, all of them hosts of exoplanets. The frequencies they measured are shown in Figure 2, along with the frequencies they predict based on the masses previously measured by the spectroscopic method. It’s clear that some disagree more than others, but across most of these stars they measured a lower frequency than predicted. If the masses that today’s authors measured by the seismic method are to be believed, the previous spectroscopic measurements were overestimated, on average, by around 15-20%. 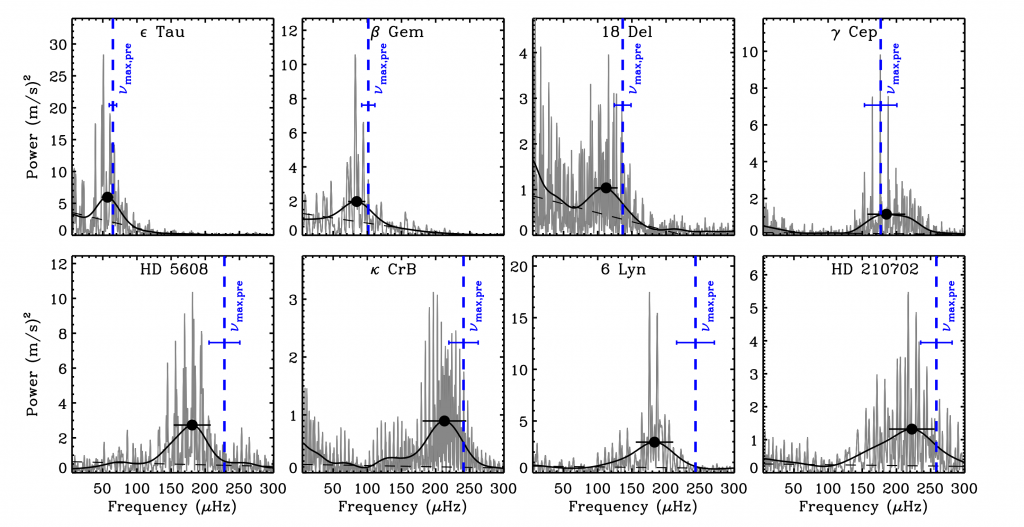 So two methods have been tried, and two different masses found. Which result should we believe? For now, the answer isn’t conclusive. The authors discuss several things about their method which might have thrown them off: incorrect measurements of the stellar temperatures and distances is one suggestion, or it may be that the relationship they used to predict the pulsation frequency is not reliable. On the other hand, if the seismic measurements in today’s paper turn out to be reliable, it means that the previous measurements by the spectroscopic method are overestimates—as has been suggested in the past. Future studies will be able to address some of the concerns about this method, for instance by using distance measurements from Gaia. Until then, like the fellow with two watches, we’re stuck with our two mass measurements, unsure which is the true answer.