Title: Investigating the Binarity of S0-2: Implications for its Origins and Robustness as a Probe of the Laws of Gravity around a Supermassive Black Hole

The most exciting discoveries in astronomy all have something in common: They let us marvel at the fact that nature obeys laws of physics. The discovery of S0-2 is one of them. S0-2 (also known as S2) is a fast-moving star that has been observed to follow a full elliptical, 16-year orbit around the Milky Way’s central supermassive black hole, precisely according to Kepler’s laws of planetary motion. Serving as a test particle probe of the gravitational potential, S0-2 provides some of the best constraints on the black hole’s mass and distance yet, being the brightest of the S-stars, which are a group of young main-sequence stars concentrated within the inner 1” (0.13 ly) of the nuclear star cluster.

The next time S0-2 will reach its closest approach to the black hole, in 2018, there will exist a unique opportunity to detect a deviation from Keplerian motion, namely the relativistic redshift of S0-2’s radial (line-of-sight) velocity, in a direct measurement. In anticipation of this event, the authors of today’s paper investigate possible consequences of S0-2 not being a single star, but a spectroscopic binary, which would complicate this measurement. 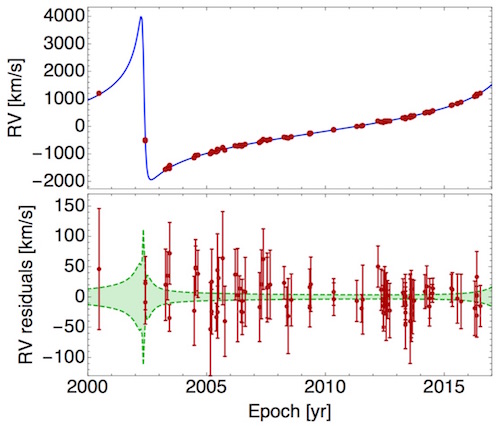 Figure 1: Top: Radial velocity measurements of S0-2 over time. Bottom: Residual velocities after subtraction of the best-fit model for the orbital motion.

To search for any periodicity in S0-2’s radial velocity curve that would indicate the presence of a companion star, the authors combine their most recent velocity measurements with previous ones obtained as part of monitoring programs carried out at both the WMKO in Hawaii and the VLT in Chile. The resulting data set consists of 87 measurements in total, which are spread over 17 years of observations and have a typical uncertainty of a few 10 km/s (Figure 1, top panel). When S0-2 passes the black hole, the relativistic redshift of its radial velocity is predicted to amount to roughly 200 km/s at closest approach, while the radial velocity is expected to change from +4000 to -2000 km/s. S0-2’s actual speed at this time will be close to 8000 km/s, about 2.7% of the speed of light. 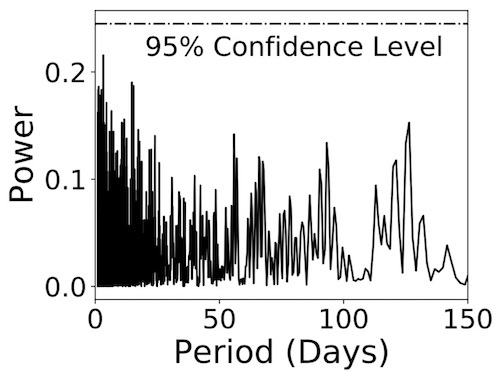 Figure 2: Lomb-Scargle periodogram of S0-2’s residual radial velocity curve (see Fig. 1). No peak reaches the 95% confidence level, which implies that no statistically significant signature of a periodic variation is found in the observations.

After having accounted for the long-term radial velocity variation due to the orbital motion of S0-2 (Figure 1, bottom panel), the authors create a Lomb-Scargle periodogram to search for short-term periodic signatures in the velocity residuals. A companion of S0-2 would need to have an orbital period shorter than 120 days at maximum, or the binary system would be too wide to remain stable against tidal forces so close to the black hole. The minimum orbital period could be no less than a few days, or the two stars would come into contact. Yet even in between these limits, the measured periodogram shows no statistically significant peak at any particular period (Figure 2).

However, this non-detection of a periodic signal places an upper limit on the radial velocity variations that could be caused by a possible companion of S0-2, which can be converted into a mass limit. For instance, at a period of 100 days, velocity changes larger than about 12 km/s would have been confidently detected. This implies a companion mass smaller than about 1.7 solar masses, assuming a reasonable total mass of the binary in the range of 14.1 to 20 solar masses.

To estimate the effect of such a companion on the prospective measurement of the relativistic redshift, the authors simulate observations of S0-2 extending into 2018, using a relativistic orbit model and assuming that S0-2 is in fact a binary. These data sets are then fit in the same way as the real data would normally be, using a model in which S0-2 is assumed to be a single star and the strength of the expected relativistic effect is described by a free parameter. The authors conclude that even if S0-2 is a binary, the relativistic redshift could still be detected with high statistical significance in 2018, although the measurement could come out slightly biased, depending on the specific configuration of the binary system (Figure 3).

Figure 3: The bias in estimating the parameter describing the strength of the relativistic redshift, if S0-2 is a binary but assumed to be a single star, for different realizations of plausible binary configurations. Shown are deviations from the expected value of this parameter in general relativity, which is 1, where for a Keplerian orbit it is 0.

A continued monitoring beyond 2018 will provide further opportunities to detect relativistic effects on the on-sky motion of S0-2 as well, and it remains to be studied how a possible binarity would influence those particular measurements. The authors also note that if, in time, the search for spectroscopic binaries could be extended to the fainter S-stars too, a comprehensive study of their binary fraction should be able to distinguish between different proposed scenarios for their formation. So stay tuned!