Today we’re going to be talking about an unusual supernova, MUSSES1604D, which appears to be the first strong evidence for one of the proposed models of Type Ia Supernovae. First, we should talk about what the model is.

Type Ia Supernovae, and Where They Come From 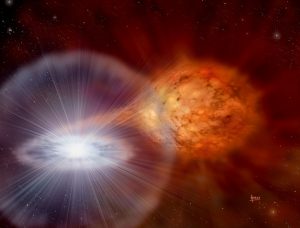 Figure 1: Artist’s impression of the ignition of an accreting white dwarf. Credit: David A. Hardy, STFC.

Everyone loves a good explosion, and supernovae are among the biggest. They’re also complicated, and there exists a whole menagerie of different classes. Today we’re going to be talking about one particular subclass, ‘Type Ia Supernovae‘ (SNe Ia). These supernovae get a lot of press. As well as being interesting for their own sake, they are useful objects for astronomy as a whole, because they allow us to measure the distances of far-off galaxies. This comes from the fact that the brightness of an SN Ia is easy to calculate from other properties of the supernova. If we know how bright a supernova is, and we can measure how much of its light we receive, it’s relatively straightforward to work out how far away that supernova is. A lot of interesting science regarding the most distant galaxies is based on distance measurements that required SNe Ia.

Despite this, there is a nagging problem with SNe Ia: we still don’t fully understand how exactly SNe Ia happen. We do know that SNe Ia result from exploding white dwarfs. A white dwarf has a maximum mass (named the Chandrasekhar mass after the theoretician who first proposed it) beyond which it cannot support itself against its own gravity. If a white dwarf grows to be heavier than the Chandrasekhar mass, it will collapse in upon itself. Collapsing causes the matter that makes up the white dwarf to become incredibly hot and dense. Past a certain point, atoms of carbon and oxygen can undergo nuclear fusion in a runaway nuclear reaction, causing an explosion which rips the white dwarf apart. This is the standard picture of what causes SNe Ia.

This basic idea still has a number of unsolved problems surrounding it, however. For today, the most important problem is this: there just don’t seem to be enough high-mass white dwarfs to match the rate of supernovae that we see. As a result, an alternative model has been developed over the past few years, which would allow white dwarfs to explode without needing to reach the Chandrasekhar limit: the so-called ‘double detonation’ model. This model needs a white dwarf composed mostly of carbon and oxygen, surrounded by a thin atmosphere of helium. If the helium is hot and dense enough to trigger nuclear burning, this can ignite an explosion that sweeps through the entire helium atmosphere. Then, a resulting shockwave through the body of the white dwarf can trigger a second explosion in the core, ripping the white dwarf apart and creating a supernova even if the white dwarf is below the Chandrasekhar mass limit.

Figure 2: Brightness of the supernova over time, as observed through blue (left) and green (right) filters. The measured brightness of the supernova is shown by the coloured squares, while various model fits are shown by different lines. It isn’t clear from the data that the team collected whether the supernova dips in brightness as the models predict, or whether it just plateaus for a few days. Either way there are clearly two separate periods in which the source is brightening. This is Figure 3 in today’s paper.

Today’s paper is about a supernova called MUSSES1604D, which was first detected in April 2016. It was discovered by a survey using the impressively named Hyper Suprime-Cam instrument (a camera which is larger than a person and heavier than the average car). This survey is optimised towards finding supernovae in the first few days after they start, while their brightness is still shooting up. While the team were watching MUSSES1604D it did several interesting things. Firstly it showed signs of what they call an ‘early flash’: an initial period in which the supernova was growing brighter, after which it seemed to either stall or fade in brightness for several days before continuing to brighten. Secondly, during this early flash the supernova turned very red, before becoming blue again during the main explosion. 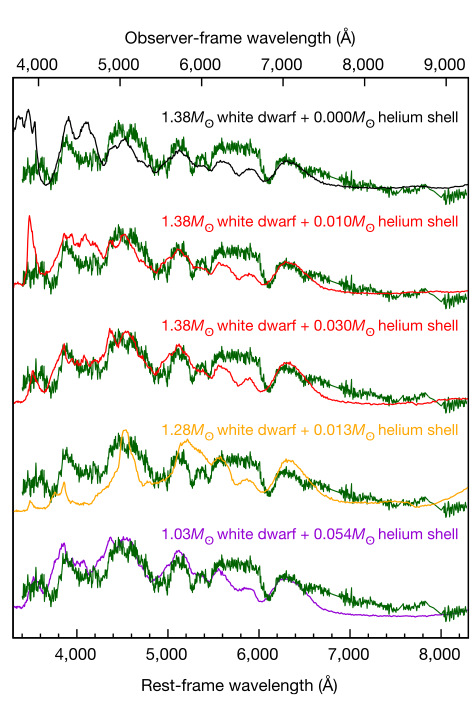 Figure 3: Spectra of MUSSES1604D, compared with models from various helium shell ignition models. Heavy metals in the supernova produce the features at the left hand side of the spectrum, while the dips on the right hand side (beyond around 6000 angstroms) are produced by silicon. Note that the models do not quite fit with the data, implying some further development of the models might be necessary. This is Figure 4 in today’s paper.

A spectrum taken of the supernova showed that its composition was also odd. The elements that you see in an SN Ia are generally dependent on the temperature of the explosion. Most of the features in the spectrum MUSSES1604D are from silicon and indicate a fairly average temperature — which agrees with the brightness that they measure. However, the spectrum also shows the presence of heavy metals, such as iron and titanium. These would generally be found in cooler SNe Ia. The presence of these heavy metals is probably linked to the red colour of the explosion’s early flash, as these elements tend to absorb a lot of blue light.

These unusual characteristics — the early flash, its red colour, and the odd mix of elements — are difficult to explain with any of the classical models of SNe Ia. However, these traits do fit rather well with the double detonation model. In this model, the early flash would come from the ignition of the white dwarf’s helium atmosphere, before the main peak in brightness which comes from the explosion of the white dwarf core. The first explosion would, through nuclear fusion, produce a burst of heavy elements that cause it to appear red. These heavy elements would then hang around during the main explosion, causing the unusual mix of elements seen in MUSSES1604D.

This is the first strong evidence we have of an SN Ia with an early helium explosion. It’s a promising sign that the double detonation model can explain at least some supernovae, and gives theorists a known example to constrain their models. This is an exciting result for the field, and brings us closer to solving the decades-long question about how SNe Ia occur.