Title:  The impact of dark energy on galaxy formation. What does the future of our Universe hold?

The future is constantly, unremittingly, and obtrusively here. It can’t stop. It’s happening all the time.

It’s happening to you right now.

Go outside and take a look.

Please tell me your back.

(I didn’t really think this through.)

And yet, for all its perennial presence, most scientists have a studied disinterest in the future. A good experiment has a predictable conclusion, observable and testable, but we wouldn’t exactly call a litmus test prescient.

The future is the domain of weathermen and climatologists. (Not to say these jobs aren’t important—two of my biggest priorities are staying dry, and not systematically destroying the capability to sufficiently food, house and support the entire human species.)

Astronomy, perhaps more than any other science, is a study of the past. Brief and exciting transient events can be predicted and observed, but beyond that, we’re lost.

When you went outside (are you’re back yet?), how much did the universe change? If you say anything other than “not at all” you’re very self-centered.

We study a static picture of a moving universe, and even Sisyphus would lack the patience to watch the cosmic clock tick on.

But whilst our vantage point is beached on one brief moment of time, our tools are not.

Maths, much like tides in harbour or bad plumbing, runs both forwards and backwards.

So today’s authors do a rare thing: they let the game run on, and study the future of the universe. 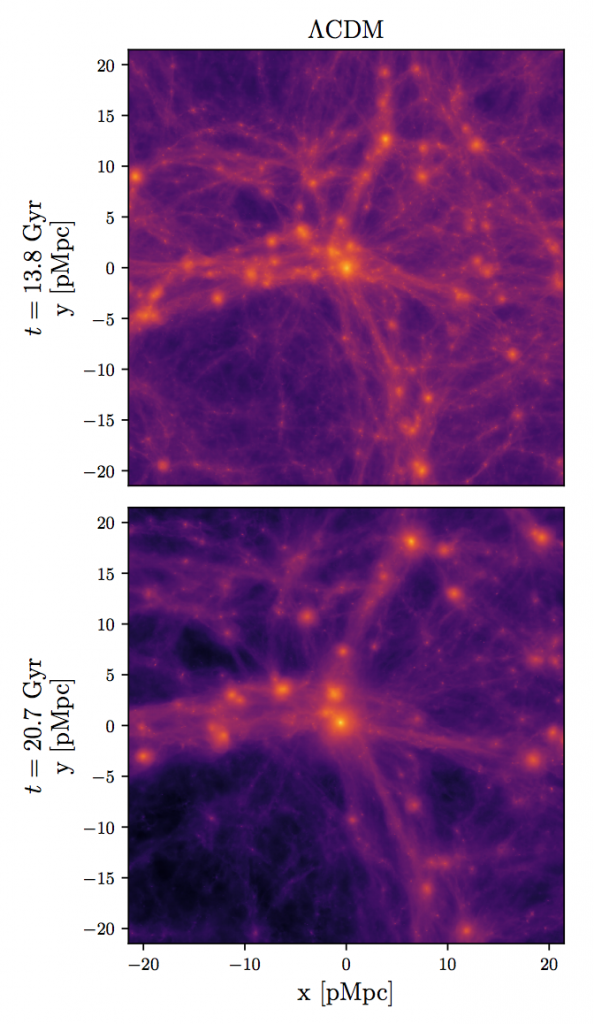 The universe now (top) and a little ways down the line (bottom). Orange shows dense areas, galaxies full of stars and gas. Notice as time wears on the picture empties, dense patches are just as dense but the space in between far emptier. By modeling star formation on this scale the authors ask whether more new stars will follow in our wake than precede us.

They study when stars form, and in doing so can give us an insight into where we sit in cosmic history.

Life is what happens if you leave hydrogen unattended for long enough. Stars and planets form, a few chemicals learn to replicate themselves, and pretty soon you’ve got gibbons.

But if the one ingredient is hydrogen (the universe having a pretty healthy supply of time to experiment with), we can ask the question of how much there is left, and how long the supplies will last.

They study the rate of star formation and how it evolves well into the future, and ask a simple question: Is ours one of the first new stars, or the last?

Gravity will try and ruin anything, pulling in gas from as far as it can reach, and if galaxies were to just keep growing like this they could form many times more stars than there are now.

But two forces oppose gravity. The first comes from inside the galaxy. Violent events like supernovae and the action of super massive black holes, blow gas back out and away, limiting star formation.

And secondly, the universe is expanding, faster and faster, seemingly pushed outwards by a constant pressure, dark energy. As it speeds up, the expansion can outstrip the inexhaustible appetite of gravity, pushing gas and galaxies away from each other faster than gravity can pull them in.

Hydrogen (and in fact all matter) is a finite resource—we’ll never have more than was birthed by the Big Bang, and if galaxies run out, either because it’s forced out from inside or the supply is cut off by an expanding universe, they will cease to grow and form new stars.

Using both a simple mathematical description of our expanding universe, and a detailed cosmological simulation (EAGLE) the authors follow this star formation rate well into the future, long beyond times humans will likely ever observe. 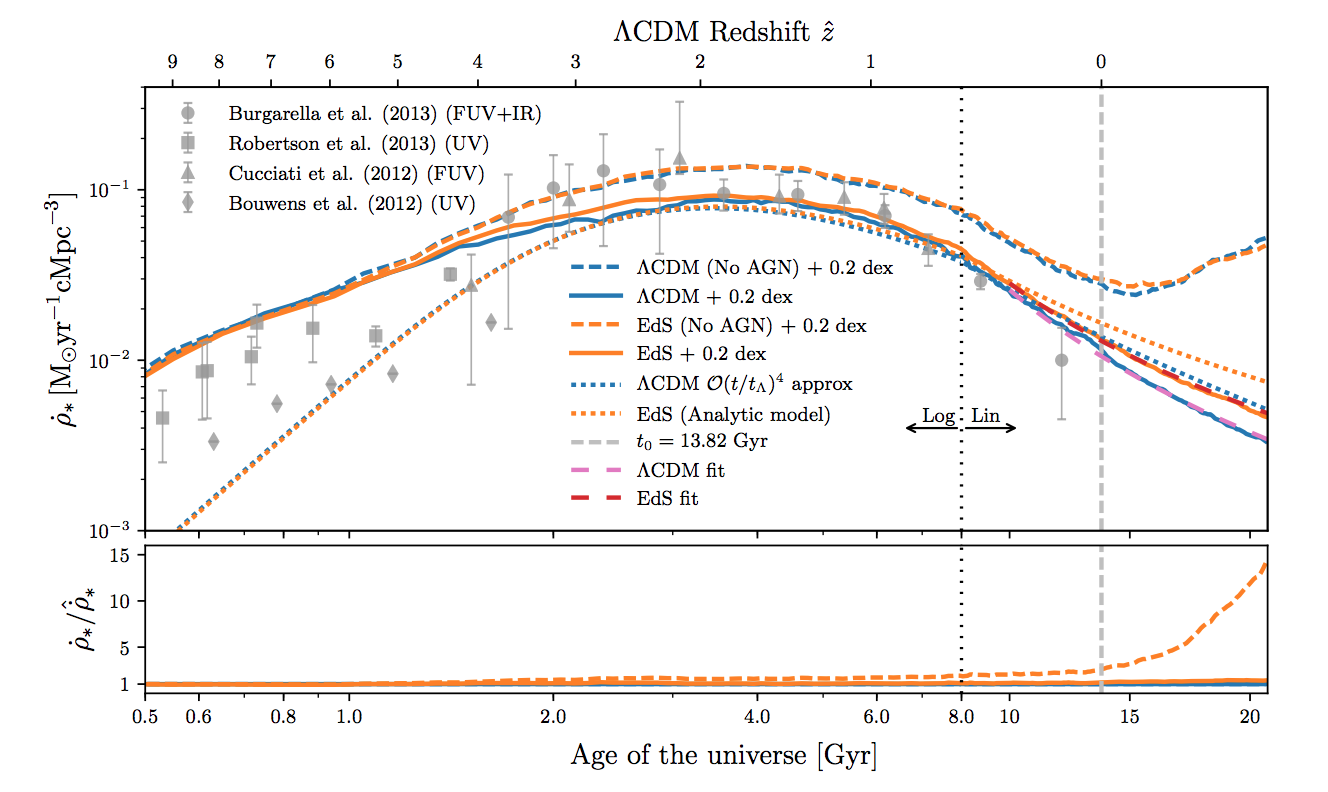 What a lot of lines, each, in it’s own way, tracing the rate at which new stars are formed. Follow the solid ones, arcing upwards until the universe is 4 billion years old, tracing through the grey points taken from observations. Then as time wears on the star formation rate decreases again, catching up with the present day at just under 15 billion years and continuing to decline well into the future. The only exception being the dashed lines, a universe without super massive black holes and the winds they birth, giving galaxies a chance for a second wind and another bout of star formation.

We’re old, or at least our star is. Most stars have already formed, few new galaxies and solar systems are yet to appear, and this is probably as good as it gets.