Radio Images of a Nearby, Ghostly Globule

Title: A Dense Plasma Globule in the Solar Neighborhood

Author’s Note: Today is Halloween for many Astrobites readers. Please pardon my allusions to the spooky holiday if you aren’t among them!

It’s Halloween, and you’ve opted out of dressing up as your favorite scientist in favor of visiting an old, abandoned, (and possibly haunted) mansion. Your heart races wildly as you explore the house; after all, your astrophysics expertise won’t help you escape the clutches of a monster. At the end of a long corridor, you spot a translucent figure passing in front of a lantern. The light is muddled and dimmed in such a way that you can’t make out the ghost responsible for the occultation. You are terrified. However, when the candlelight comes back into focus and the figure has vanished, you regret not having snapped a picture of the scene.

Eerie apparitions similar to your Halloween spook occur in space, too. In today’s astrobite, we discuss the case of the quasar J1819+3845: an extragalactic radio source that has long been a source of interest to astronomers due to its extreme and rapid changes in brightness.  The authors of our featured paper managed to capture radio images of the ghostly globule that obscures J1819+3845, enhancing our understanding of its structure.

Extreme scattering events (ESEs) occur when a radio signal from an astrophysical object is dramatically scattered, causing significant changes in the source’s brightness. The scattering can be attributed to a small lens of dense interstellar plasma (ionized gas) along the line of sight between an observer and the object of interest. Though they’ve been studied by astronomers for decades, the structure of these plasma globules is poorly understood. What we do know is that J1819+3845 is a distant radio source located far outside our Galaxy. The plasma lens, however, is extremely close to us (within a few light-years). It is pure coincidence that this screen of scattering material lies along the line of sight between J1819+3845 and the Earth.

At the heart of the ESE conundrum is the following: the plasma lenses are very dense (up to 1,000 times denser than the surrounding interstellar medium), but maintain a coherent structure. How could they possibly stay in pressure equilibrium with the sparse ISM that surrounds them, rather than dispersing in that environment? It has been suggested that the lenses could be the result of ionized matter around small “failed stars,” or that many thin sheets of only slightly denser-than-average plasma could align perfectly to cause the significant scattering. However, it has thus far been difficult to make meaningful statements about the structure of the globules, because scintillation (brightness variations) at radio frequencies only betrays changes in the ISM column density — a measure of gas density along the line of sight to an object. The authors of today’s paper probe the physical structure of these plasma lenses via direct imaging for the first time.

Radio observations were made with two telescopes — the Westerbork Synthesis Radio Telescope (WSRT) at frequencies around 350 MHz, and the Low Frequency Array (LOFAR) at around 150 MHz. In these data, we are concerned with a special phenomenon called Faraday rotation. Light from a source can be decomposed into left and right-handed circular polarizations. When light travels through a magnetized plasma, these polarizations travel with different phase velocities (the velocity at which the phase of a certain frequency of light travels). This causes the orientation of the polarization of this light to rotate. Linearly polarized Galactic synchrotron emission acts as a “backlight,” to use the authors’ phrasing, against which this Faraday-rotated light can be glimpsed.

Figure 1 presents the WSRT data both in terms of polarized intensity (measured in Kelvin) and the rotation measure — closely related to the Faraday rotation — of that light. They reveal a globular structure that may be associated with observed brightness variations of J1819+3845. 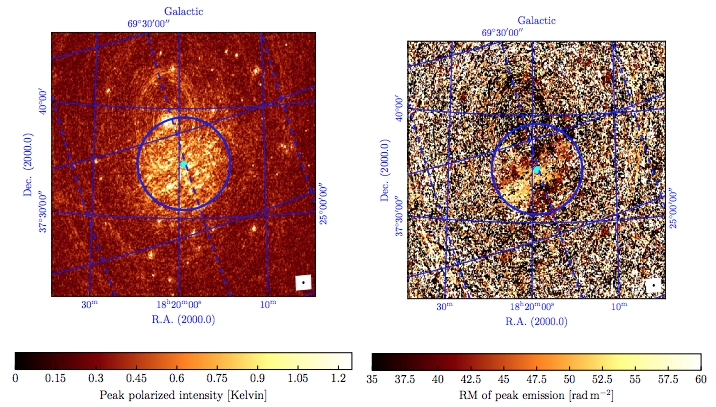 Figure 1: WSRT images of J1819+3845. The left-hand map displays polarized intensity, and the right-hand map plots rotation measure — a way to measure the overall effect of Faraday rotation. The cyan dot is the quasar. The interesting swirls to the upper left of the blue open circles is an artifact of quasar subtraction. Both images show a coherent globular structure. Figure 1 in the paper.

The study’s authors are fairly convinced that the edges of this globular structure are responsible for the observed scintillation along the line of sight to J1819+3845, which ended in 2006. There is only a 0.2% chance that such a structure would end up in such an image mistakenly, and the quasar is close enough to the edge of the globule that it is reasonable to assume the edge of the lens occulted the source and then moved along.

What We’ve Learned From Our Spooky Encounter

Though the structure of the plasma globule was well characterized by this study, it is impossible to make confident statements about these data supporting or refuting any of the proposed models. The thin-sheet model predicts thicknesses of

cm, which wouldn’t be resolvable in these images. For the model invoking ionized material around failed stars, the observed globule is 1,000 times larger than theory would predict. Excitingly, the authors mention that the globule is between 1 and 3 parsecs away, and may be the closest object to our solar system. Looking forward, the plasma’s significant proper motion implies that future studies will extract new information from similar images. Both theoretical and observational efforts will need to be pursued in order to better characterize this globule and test theories about its structure; however, it is proof that direct imaging of these ghostly structures is a fruitful new endeavor.

Radio Pulsars: How Slow Do They Go?