Coronal Mass Ejections and You 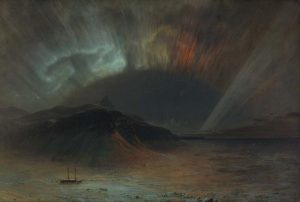 Figure 1. Aurora Borealis, an 1865 painting by Frederic Edwin Church. This and many other paintings by Church are posited to be inspired by the aurorae of the 1859 solar storm. Smithsonian American Art Museum.

Coronal mass ejections (CMEs) are immense eruptions of solar plasma and magnetic fields. When a CME strikes a planet, it can have huge effects; over billions of years, CMEs can strip away a planet’s atmosphere. In the short term, CMEs wreak havoc at Earth by causing dangerous and costly geomagnetic storms.

In 1859, a CME impacted the Earth and caused the most intense geomagnetic storm ever recorded, resulting in stunning auroral displays over much of the northern hemisphere (Figure 1) and widespread failure of telegraph systems. An event of this magnitude today would cause huge damage to power grids, satellites, and oil pipelines—resulting in a trillion dollars of damage in the United States alone. So, how can we prevent this from occurring?

In today’s paper, the authors use simulations to determine the magnetic fields of CMEs at Earth based on the properties of the active region from which they erupt. They begin this process by determining the location of the CME eruption on the solar disk. Then, they extract the magnetic field properties of the eruption zone using magnetograms—maps of the magnetic field strength and direction across the solar surface. The solar magnetic field becomes an input parameter for Forecasting a CME’s Altered Trajectory (ForeCAT), which models the propagation of a CME through the solar corona. The CME may rotate, expand, or be deflected as it travels out, depending on how the Sun’s magnetic field is structured. The ForeCAT results are passed to the ForeCAT In situ Data Observer (FIDO), which simulates what two Earth-orbiting spacecraft, ACE and Wind, would observe as a CME passes over them. 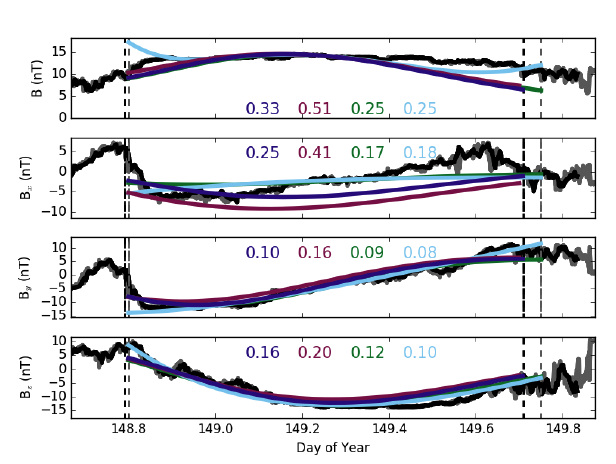 Figure 2. Comparison of in situ data (gray and black lines) and FIDO results. The ForeCAT-driven FIDO outputs discussed in this post are shown in dark blue. Three other models with different assumptions about the CME’s magnetic field are also plotted: graduated cylindrical shell (GCS) model-driven (purple) and two models where the CME is represented by a flux rope (green and light blue). The goodness-of-fit scores for each component and the total magnetic field strength are also listed; lower scores indicate a better fit. ForeCAT generally outperforms the GCS model, but is improved upon by performing a random walk with the CME width, tilt, and location (green and light blue lines). This shows that the accuracy of the FIDO output is limited by the accuracy of the ForeCAT output, and assuming reasonable departures from the ForeCAT output can yield even better FIDO results. Adapted from Figure 5 in the paper.

While predicting the magnetic field parameters of Earth-impacting CMEs is critical to estimating the severity of the geomagnetic storm, it’s also important to be able to predict whether or not a CME will impact the Earth at all—well in advance of its arrival. The authors use two parameters—the angular distance between the Earth and the CME and the angular tilt between the Earth-CME line and the CME’s toroidal axis—to determine whether a given CME from their sample would be designated a hit or a miss based on their ForeCAT results. Figure 3 shows the results of the impact-or-miss analysis for the 45 CMEs modeled here. In general, the model correctly predicts whether or not a CME will hit the Earth. However, the line dividing hits and misses is sensitive to the width of the CME, which is often difficult to measure accurately, so the authors propose giving a likelihood of impact rather than reporting a definite yes or no. Someday, weather forecasts might read a bit differently: 75% chance of precipitation, 40% chance of CME impact. 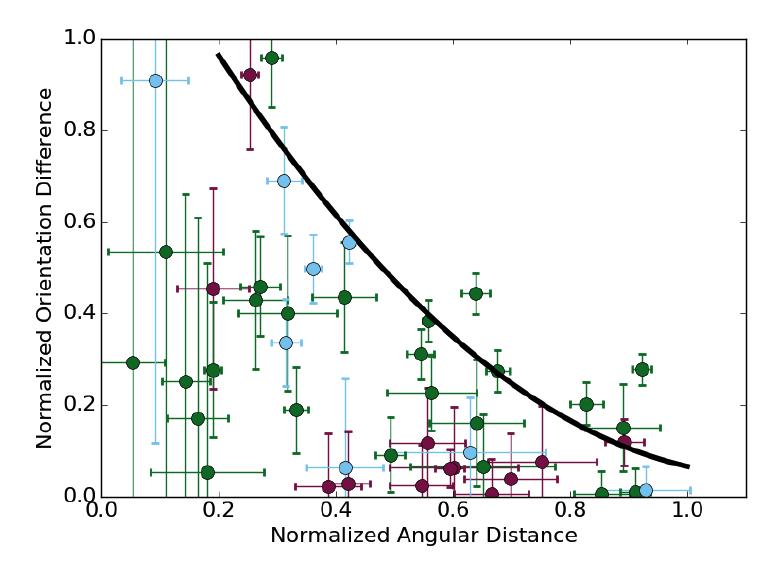 Figure 3. Orientation of the CME versus the angular separation between the CME and the Earth. Purple symbols represent narrow CMEs, blue symbols represent wide CMEs, and green symbols fall somewhere in between. Points falling to the left of the black line are predicted impacts. Adapted from Figure 10 in the paper.

The Future of Forecasts

The authors expect that with further development, ForeCAT will be able to forecast the likelihood of a CME impact given information about an active region on the Sun. From the range of likely CME parameters that ForeCAT produces, FIDO can determine the magnetic field parameters at the Earth. These predictions can in turn aid efforts to lessen the disastrous effects of geomagnetic storms. Looking ahead, CME forecasting models like ForeCAT and FIDO could be used not only to predict CME impacts on Earth, but on any planet or spacecraft in the solar system. Advance warning of CME impact will be critical for protecting astronauts bound for Mars and beyond as humans leave the protective confines of Earth’s magnetosphere and make the push into deep space.