Title: Predicting the corona for the 21 August 2017 total solar eclipse

The total solar eclipse on 21 August 2017 was possibly the most-viewed celestial phenomenon in history (look at us, still talking about it!). Not only was it a wondrous sight for hundreds of millions of observers, it was also a rare chance to study one of the least understood parts of the Sun — its corona. Unfortunately, the corona is also the region that gives rise to phenomena like solar flares that could have extremely damaging effects on our tech-based society. As a consequence, a lot of money and resources go into trying to forecast when the next major solar flare might occur. Today’s authors capitalized on the rare opportunity afforded by the 2017 eclipse to study the Sun’s corona by comparing predictions of the corona to what was actually observed on the day of the eclipse (spoiler: the simulations actually did reasonably well!).

A Hot Topic in Solar Astronomy 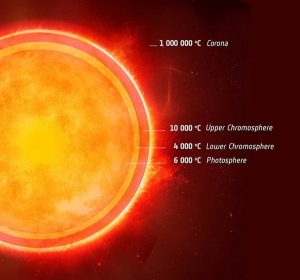 Figure 1. The solar atmosphere. The corona is many times hotter than the layers below it. Credit: European Space Agency

The solar corona is the layer of the Sun’s atmosphere closest to its visible surface (aka the “photosphere”). Counterintuitively, the corona reaches temperatures many times hotter than those of the photosphere below, millions of Kelvin compared to just a few thousand. While there are some theories as to why the corona gets so scorchingly hot, the truth is that we don’t know much at all about this mysterious region of the Sun’s atmosphere. This is because it is almost always completely outshone by the Sun itself and is therefore only visible during total eclipses. The recently-launched Parker Solar Probe from NASA will swing closer than nine solar radii from the photosphere (reaching 430,000 mph as it does so) and is expected reveal more clues as to what’s happening inside the corona.

Our inability to actually observe the corona poses a real problem because the corona is also an incredibly dynamic region with complex magnetic field interactions. These interactions fuel eruptions on the Sun, potentially resulting in large Coronal Mass Ejections (CMEs) that could cause hugely damaging geomagnetic storms. Total eclipses are therefore incredibly invaluable to solar astronomers precisely because they offer rare opportunities to study the poorly understood corona.

The first step to predicting solar storms (and consequent impacts here on Earth) is being able to predict the structure of the Sun’s magnetic field. Today’s authors are affiliated with Predictive Science, Inc., which has been working toward accomplishing exactly that for the past two decades by running large-scale, 3D simulations of the solar environment. Using measurements of the photosphere’s magnetic field taken by the Helioseismic and Magnetic Imager (HMI) aboard NASA’s Solar Dynamic Observatory (SDO) from 16 July–11 August 2017, they predicted what the corona would look like in both white light and ultraviolet light on 21 August 2017.

Figure 2. Side-by-side comparison of the corona during the eclipse (left) with the simulated corona (right). Figure 1b,c in paper.

Comparing to actual images taken during the eclipse (Fig. 2), the simulations predicted the overall structure of the corona pretty well! Notably, the large “streamers” that emanate from the Sun and dominate the images were predicted accurately. However, many of the finer details were not predicted as accurately. Many of these differences arise from limitations in obtaining small-scale magnetic field measurements that lead to finer detail in the corona. Additionally, the simulations do not yet encompass the complex models needed to resolve the small-scale spatial features (primarily limited by the time these simulations take to run).

The reader might also notice one glaring difference between the authors’ predictions and the actual images from the eclipse — the presence of a large streamer coming from the Sun’s upper-right (Fig. 2b) that is absent in the simulation images (Fig. 2c). Investigating further, the authors found that the magnetic data for that particular region of the Sun was nearly a month old by the time of the eclipse, which is plenty of time for the magnetic field to change and produce more features. When they reran their simulations using the latest and greatest HMI data from 12-16 August 2017, which had begun showing signs of the feature developing, their simulations then produced the missing streamer!

Today’s paper illustrates the importance of obtaining accurate solar magnetic field data when trying to make predictions about future evolution of the corona. The authors’ simulations are primarily limited by the observations available, since NASA’s SDO is only a single vantage point and must contend with the 27-day rotation of the Sun (meaning we only see half of the Sun at any given time!). The net result is that they can only qualitatively predict the Sun’s behavior, and only about a week in advance! More data from different vantage points would help mitigate our current inability to observe the far side of the Sun, allowing us to better predict the evolution of the Sun’s magnetic field and consequent “space weather.” Additionally, the authors note a need to incorporate ever-more complex and complete models into their simulations, even though that would make the simulations take even longer to run.

NASA’s Parker Solar Probe, which just launched last month, and the ESA’s Solar Orbiter mission, which is scheduled to launch in 2020, will give us crucial information about the Sun’s magnetic field from up close and personal. The spacecraft themselves will also benefit from the resulting improved space weather predictions. With a better understanding of the solar corona, enabled by comparisons between simulations and observations such as the one presented in today’s paper, we might someday be able to predict solar flares well in advance and forecast space weather just as we do with terrestrial weather.