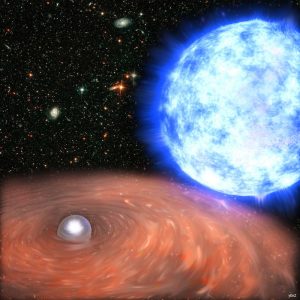 Today’s paper takes another look at a binary system, HD 49798, which has been puzzling scientists for some time. HD 49798 is an X-ray binary, a type of binary in which matter is transferred onto a central, compact star (a white dwarf, neutron star or black hole) from a donor star. The authors suggest that many of the unusual attributes of the system could be explained if one of the stars is a young, half-formed white dwarf which is still in the process of contracting.

The Contradictions of HD 49798

The mystery around HD 49798 is the nature of its central star. Because the central star is much fainter than the donor star, we can’t observe it directly, and have to adopt some slightly circuitous means if we want to study it. There are two suggestions for what the central star might be: a white dwarf or a neutron star. Both are backed up by their own evidence.

The X-ray emission of HD 49798 seems to suggest that the central star is a white dwarf. These X-rays are emitted by superheated matter falling onto the compact star. In HD 49798 the X-ray flux is pretty weak compared to most X-ray binaries, meaning that the amount of material transferred must be pretty low. It’s likely that the material transferred is stellar wind emitted by the donor star, rather than anything more substantial. The X-ray flux is also ‘softer’ (meaning that it has a longer wavelength) than that of many X-ray binaries, and softer emission is generally associated with white dwarfs rather than neutron stars.

However, when we look at the changes in the central star’s spin period, it seems that a neutron star is more likely. The central star spins on its axis once every 13.2 seconds, which can be measured by finding pulses in the X-ray flux. Measurements over decades have shown that this spin is accelerating (the system is ‘spinning up’) at a stable, and fairly high, rate. Given the low accretion rate of the binary, this high spin-up is most easily explained if the central star is a neutron star. 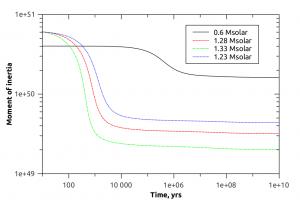 Figure 2: The evolution of a white dwarf’s moment of inertia over its lifetime, for various masses of white dwarf HD 49798’s central star has a mass of 1.28 solar masses. Source: Figure 1 from today’s paper.

To understand the latter, we need to consider the moment of inertia of the star. Moments of inertia are to angular moment what mass is to linear momentum — if you want to cause something to spin or accelerate its spin, you have to apply more force if it has a greater moment of inertia. For a given mass, an object with a larger radius will generally have a higher moment of inertia. (You can test this by spinning on a chair with your arms extended and then pulling them in close to you — you should spin faster with your arms tucked in.) A neutron star’s smaller radius means that the same driving force will spin it up faster than we would see with a white dwarf. In most X-ray binaries the central star is spun up by the angular momentum of the material it is accreting. The slow accretion rate yet large spin-up rate of HD 49798 make sense if the central star has a low moment of inertia (like a neutron star) but are hard to explain if it has a high moment of inertia (like a white dwarf).

Today’s paper gives an alternate suggestion that could reconcile these seemingly contradictory pieces of evidence. They propose that the central star is a white dwarf, but that its spin-up is not driven by accretion. Instead, they suggest that the white dwarf is young enough that it is still in the process of contracting. White dwarfs originate as main sequence stars, but are only around the size of the Earth. The contraction of a star down to this size happens quickly (roughly on the order of a million years), so we’ve never before managed to see a white dwarf in that stage of its evolution. However, as today’s paper points out, a contracting white dwarf could explain the spin-up that we see in HD 49798. As the white dwarf’s radius shrinks, the moment of inertia of the star decreases. In order to conserve angular momentum, the star must then spin faster.

Using models of white dwarf evolution, the authors predicted how a white dwarf’s moment of inertia changes over its lifetime (Figure 2). From these moments of inertia they calculated the rate of spin-up that would be driven in the white dwarf. They found that a white dwarf with 1.28 solar masses (the mass of HD 49798’s central star) and a relatively young age of around 2 million years could explain the spin-up of HD 49798 (Figure 3). 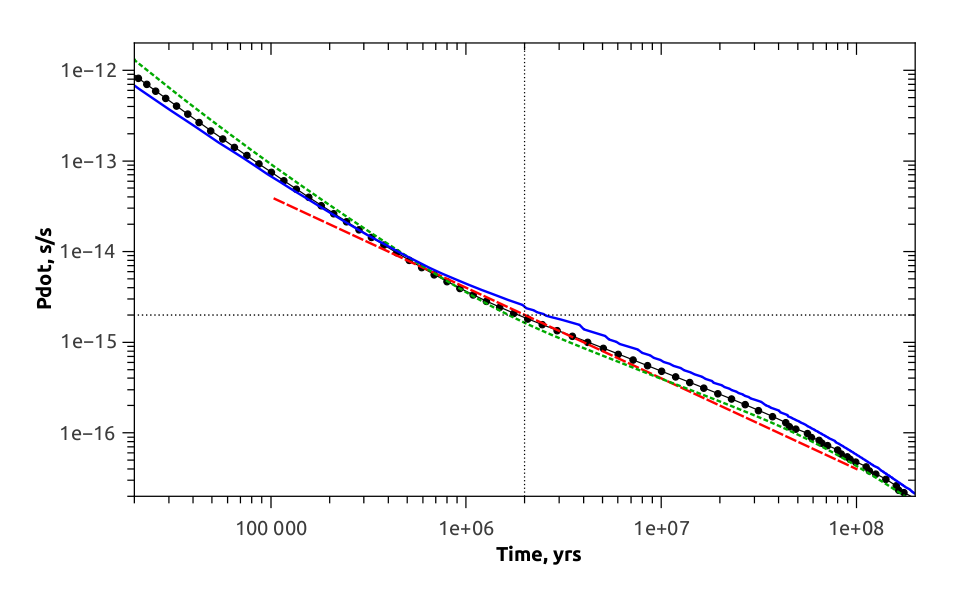 Figure 3: Predicted spin-up rate of the white dwarf’s as it ages, based on the moments of inertia in Figure 2. The measured spin-up rate agrees with a white dwarf age of 2 million years. The black line corresponds to the compact star’s measured mass of 1.28 solar masses; blue and green lines are the same mass as in Figure 2. The horizontal line represents the white dwarf’s measured spin-up; the vertical line is the best fit age, 2 million years. Source: Figure 2 in today’s paper.

Of course, this is not confirmation of the theory, but it is the first proposition that can explain all the evidence so far. If correct, this is an exciting chance to study this little-understood stage of white dwarf evolution.

The authors finish by discussing the possibility that white dwarfs in other binaries experience this same kind of spin-up. For most systems, they predict that the spin-up caused by accretion will be far greater than the spin-up caused by a contracting white dwarf. It’s only due to the unusually low accretion rate of this binary that the contraction-powered spin-up is visible. In the future, we can hope that new, whole-sky X-ray surveys like eRosita will find similar systems that let us further explore the evolution of young white dwarfs.