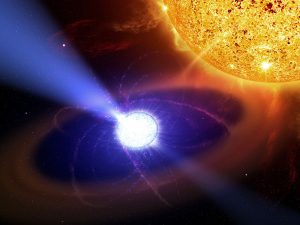 It’s a common joke among astronomers that the question, “Have you considered magnetic fields?” is always a stumper at conferences. Magnetic fields are complicated and often behave counter-intuitively. When people need to consider magnetic fields, it’s nice to be able to make simplifying assumptions: for instance, that a system is either “magnetic” or it’s “non-magnetic”. In reality, the situation can be messier. We explore an example in today’s paper.

We’re going to be talking about how magnetic fields interact with a common astronomical phenomenon called accretion. This is when an object is trying to pull some matter onto itself (trying to “accrete” it). Because the matter has some angular momentum it cannot fall directly onto the object — instead it orbits the object and slowly spirals inwards. This inspiralling material forms an “accretion disc” around the object. Where the material falls onto the object’s surface it becomes superheated, and in many cases the accretion disc can be brighter than the central object itself. Accretion discs are seen around white dwarfs, neutron stars, stellar-mass black holes, and supermassive black holes. Today’s paper is about an example of the white dwarf case: a binary system in which a white dwarf is pulling gas from the atmosphere of a main sequence star.

Today’s paper is about a system called MV Lyr, which until now fell squarely into the non-magnetic category. The system was in the original field of view of the Kepler satellite, which measured changes to its brightness over the course of around four years.

Like many accretion disc systems, MV Lyr is rather messy and shows variability on all kinds of timescales (see Figure 2). This variability has several different mechanisms, but most of it is driven by changes in the rate at which the white dwarf is accreting: when the accretion rate is high, the system is bright. 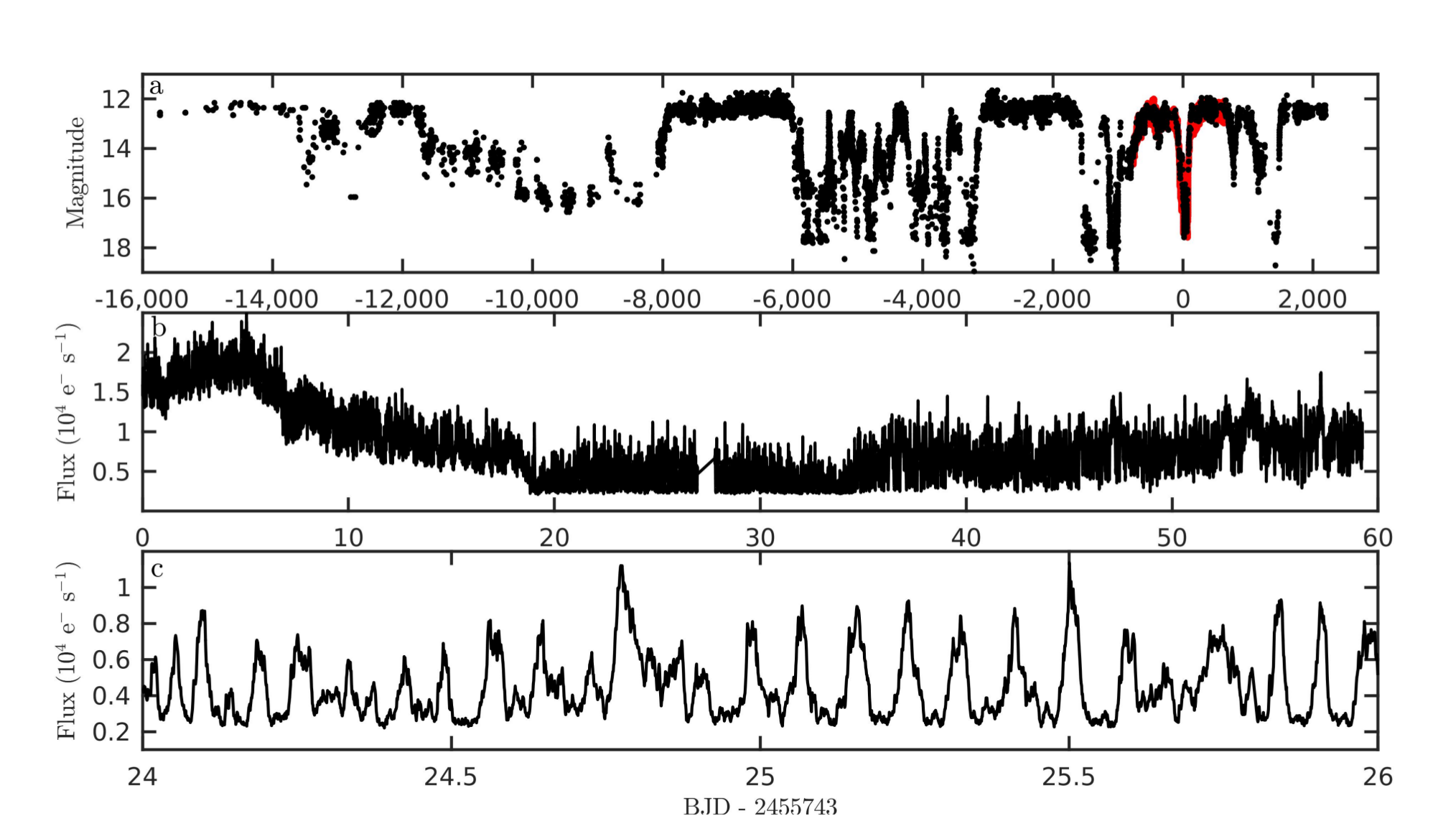 Figure 2: Top: Variability of MV Lyr over several decades, showing a lot of long-term variability. The red highlighted stretch shows the 4-year stretch of the Kepler observations. Middle: A zoom-in on the lowest-magnitude stretch of the Kepler data. Bottom: Another zoom-in on the lowest-amplitude portion of the middle panel. During this low-amplitude stretch, MV Lyr shows half-hour bursts of brightness recurring roughly once every two hours. Source: Figure 1 in today’s paper.

The authors of today’s paper were particularly interested in a 20-day period of MV Lyr’s lightcurve in which the system was at its faintest. During this period the system showed strange pulses in brightness: it would get significantly brighter for about half an hour every two hours. In some cases the system would grow 6x brighter than its baseline, only to fade again half an hour later. These peculiar flashes are hard to explain as pulsations of one of the stars, or to associate with the period on which either star spins on its axis. The authors concluded that these flashes, like the longer-term variability of the system, must be driven by changes in the accretion rate of the system.

There’s one mechanism which might explain changes in the accretion rate on such a short timescale, and I’m afraid it involves magnetic fields. The mechanism is known as “magnetic gating”, and previous papers have suggested it might be at play in certain neutron star binaries and some systems with newly-formed stars. The theory runs that if the accretion rate is low, even a very weak magnetic field will disrupt the inner edge of an accretion disc. This effectively cuts off the flow of matter onto the white dwarf. That matter instead builds up in the disc, increasing its density and pressure. Eventually the pressure pushing on material at the inner edge of the disc becomes strong enough that the material can break through the magnetic field, and accretion onto the white dwarf starts again. This burst of accretion only lasts until the built-up material in the disc has been drained away, after which we see another halt in the accretion rate. 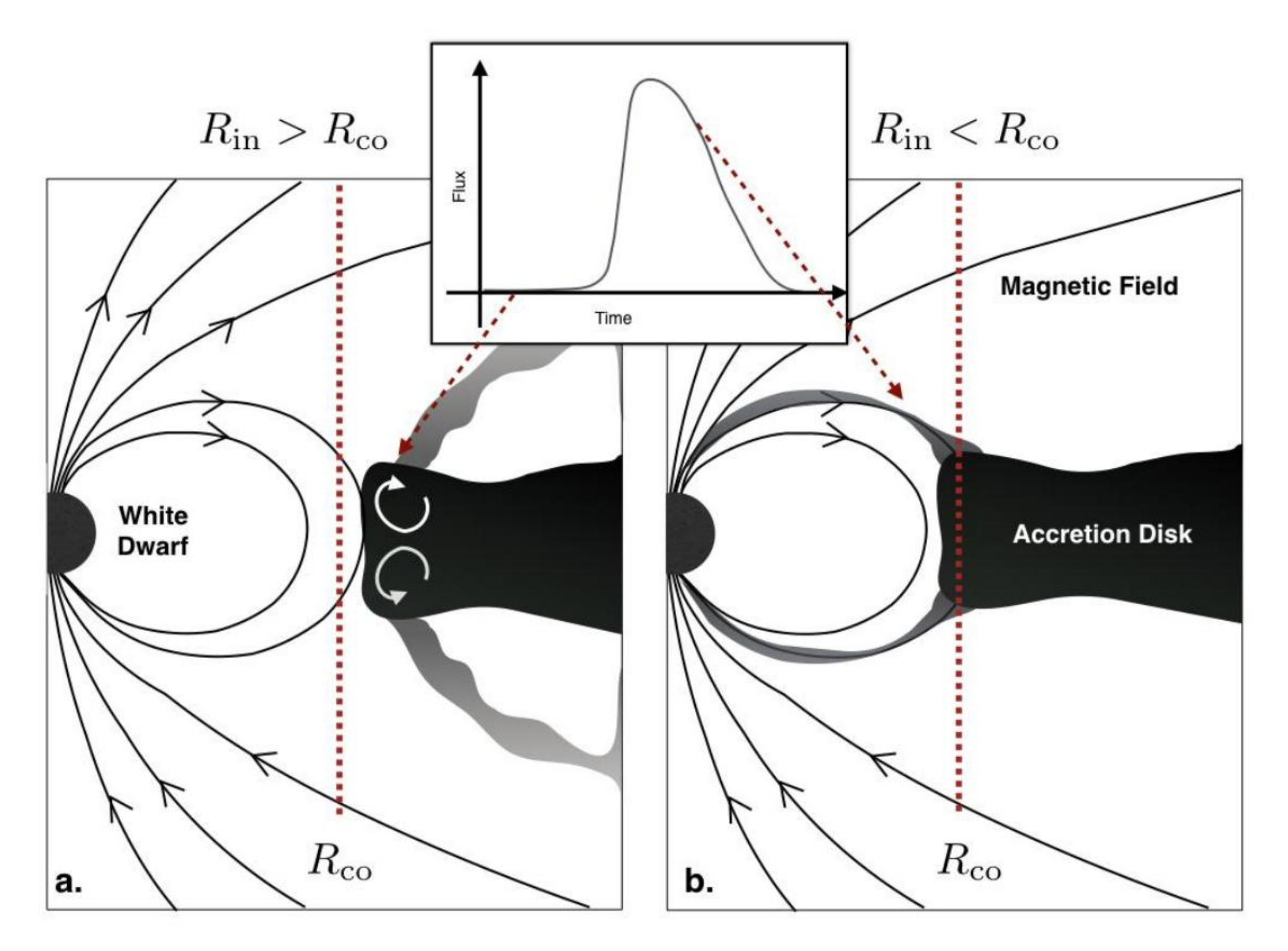