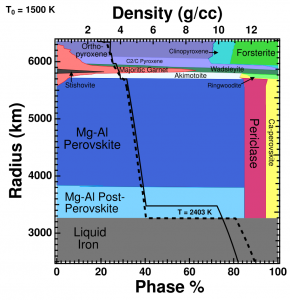 Phase diagram of the simulated interior of an Earth-like planet. It shows the different compounds that make up the mantle for varying depths.

We get excited when hearing the news of a newly discovered planet inside the habitability zone of a star. But caution is advised: being actually habitable is much more involved than simply having the right amount of irradiation. Other aspects such as the chemical composition of a planet’s atmosphere and crust are key for life as we know it to flourish. The challenging nature of precisely measuring the chemistry of stars is daunting but, according to today’s paper, we may actually be capable of inferring about planetary mineralogy for our closest extrasolar neighbors.

Another dimension to habitability

Since directly measuring the composition of the solid innards of an exoplanet is far beyond our current capabilities, we often rely on indirect methods to infer about their bulk composition. For instance, if we measure the radius of a planet using the transit method and then its mass using radial velocities, then we can estimate its density. But this relation doesn’t provide enough fine details to allow an inference about, say, the size and composition of the core and mantle of the planet — i.e., its mineralogy. However, our current hypotheses on how planetary systems form suggest that the chemical composition of a star and the planets that orbit around it should be strongly connected. This means that, in principle, we could infer about the mineralogy of a planet if know the composition of the host star well enough.

Relative chemical abundances are key to habitability, such as the molar (number of atoms) ratio between iron and magnesium (Fe/Mg), which affects the size of a planet’s core and consequently the heat transfer to the surface. Another example is the presence of volatile elements (those that like to stay in gaseous phase) in the crust, which influence tectonic movement and geochemical cycles. The major controls in planetary mineralogy are the ratios of the elements magnesium, aluminum, silicon, calcium, and iron. Such ratios are routinely measured in atmospheres of stars, although with varying degrees of precision.

The overall idea of today’s paper is to assess if we can measure these abundances in stars in the solar neighborhood precisely enough to make any inferences about the mineralogy of putative rocky planets around them. In order to do that, the authors used the Hypatia Catalog of stellar measurements: they selected 10 nearby well-known stars with reliable chemical abundance estimates and started digging (see Fig. 1). 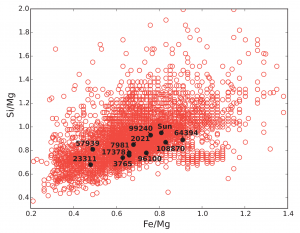 Figure 1. Molar ratios (fraction of the number of atoms) of silicon and iron over magnesium for the entire Hypatia Catalog (red symbols) and the selected 10-star sample plus the Sun (black dots). These stars were selected for their low uncertainties in molar ratios.

What about the other way around? What is the minimal precision necessary to distinguish unique mineralogy populations for exoplanets? To estimate that, the authors take the extremes of molar ratios in the 10-star sample and compute the maximum uncertainties that would avoid an overlap between populations in these extremes. This is done for ratios of silicon, iron, aluminum, and calcium over magnesium (see Fig. 2). 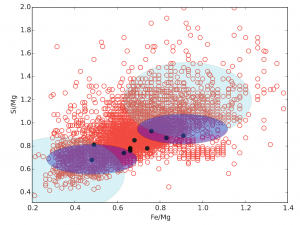 Figure 2. Same as figure 1, but with the Sun removed. The dark blue circles represent the regions of maximum uncertainties to allow us to distinguish two different populations of planetary mineralogies in extremes of molar ratios of the 10-star sample. If these ellipses overlapped either in the x- or y-axis, then we would not be able to discern mineralogy populations. The light blue ellipses are the same, but for the entire Hypatia Catalog.

The authors conclude that the minimum precision of stellar abundances necessary to discern differing mineralogy populations is nearly one order of magnitude more stringent than current, run-of-the-mill techniques allow. Although this may sound a bit discouraging, there are in fact research groups that managed to obtain very precise stellar chemical abundances by applying more advanced techniques, albeit applied for more specific targets (e.g., very bright stars or solar twins). With the advent of giant ground-based telescopes and the maturing of these more precise stellar characterization methods, we may, in the near future, be adding a new dimension to the search of habitable planets.