Today’s paper involves a case of astronomers observing the wrong object but getting a paper out of it anyway. While observing with the HIRES spectrograph on the Keck I telescope the authors of the paper attempted to observe the carbon star BPS CS 22949-0037. After finishing a 20-minute exposure they discovered that they had actually observed a different star nearby, only 49.16 arcseconds away (as shown in Figure 1). Instead of discarding the mistaken observation they investigated the spectrum from the star they’d observed and realized that it was extremely close to that of the Sun, making it a so-called solar twin. The authors named this new star Inti 1 after the Quechua word for the Sun. 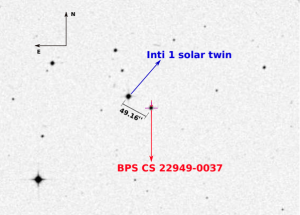 There’s currently no single definition of what exactly makes a star a solar twin, but intuitively it’s a star with various parameters “close” to the Sun: effective temperature, surface gravity, metallicity, et cetera. The authors of this paper adopted a definition from an earlier 2009 paper which defines a solar twin as a star whose temperature is within ±100 Kelvin and whose surface gravity and metallicity are within ±0.1 dex of the corresponding values for the Sun. Dex is short for decimal exponent; two numbers within 0.1 dex of each other have a ratio of less than 100.1 ≈ 1.2589. (Put another way, they’re less than 25.89% different.)

Figure 2 shows a portion of the Sun’s spectrum compared with that of HD 45184, (a previously-known solar twin which the authors observed the same night) and Inti 1. From investigating Inti 1’s spectrum in detail they found it to be about 0.07 dex higher in iron than the Sun, and about 0.059 dex (carbon) to 0.088 dex (neodymium) higher in eighteen other elements, giving it slightly higher metallicity than the Sun on average. 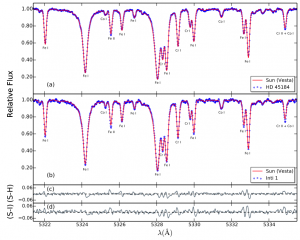 Figure 2. This plot shows a small portion of the Sun’s spectrum compared with the spectra of two solar twins: on the top the previously-known solar twin HD 45184, and on the bottom the star discovered in this paper, Inti 1. Figure 2 in the paper.

Solar twins have a lot of potential as objects of study, with the first one (the star 18 Scorpii) being identified only in 1997. Exact numbers are hard to pin down, but there are probably at least a hundred solar twins known at this point depending on the definition used. Because they’re so similar to the Sun in ways we can measure we can assume based on our knowledge of stellar physics that they have similar overall properties like absolute luminosity.

This powerful assumption allows us to leverage our knowledge of the Sun, which can be studied easily, to understand faraway stars which can’t studied so easily. Solar twins can be used to study the chemical history of our galaxy, study stellar interior models, measure distances within the Milky Way, see how the rotation of Sun-like stars develops over their lifetime, or test whether a solar twin’s chemical abundance could perhaps show signs of planet formation. (Some solar twins are known to have planets as covered in an earlier Astrobite!)

A somewhat counter-intuitive use for solar twins could involve helping to study asteroids in our solar system. To see how, we first have to ask the question,“How would you measure the Sun’s spectrum with the same instrument used to measure stellar spectra?” You obviously can’t just point an instrument made for observing the night sky at the Sun—it would melt! But if you’re trying to find solar twins, you want to test your measurements against the Sun as directly as possible. To do that astronomers take spectra of asteroids, which reflect the solar spectrum almost perfectly and can be compared to prospective solar twins.

That “almost” is significant, however, and you can flip things around. If you instead subtract the spectrum of a solar twin from the spectrum observed from an asteroid any differences can tell you something about that asteroid’s mineralogy. Various minerals such as olivine or pyroxene leave characteristic spectral signatures behind in the data, and the depth of their absorption bands can even indicate things like the amount of iron present in the mineral!

In summary, solar twins are interesting stars that can help shed light (literally and metaphorically) on a number of topics in astronomy due to their similarity to the Sun. And don’t be afraid to investigate mistakes or anomalies in your own research—it just might pay off in a paper.

A new tool to investigate a century old mystery