Not too long ago, several Earth-sized planets were found orbiting TRAPPIST-1 (see this astrobite for more details). This star-planet system is exciting not only because it has a few terrestrial planets in the Habitable Zone but also because the system is somewhat close to our own solar system, at a distance of about 12 parsecs. There are seven planets in this system, but the authors of today’s paper focused on the four in the Habitable Zone– d, e, f, and g. An artist’s conception of the TRAPPIST-1 system, as compared to our own inner solar system, can be seen below in Figure 1. 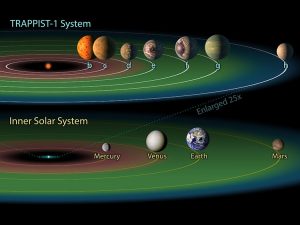 Figure 1: This artistic conception (from the NASA Exoplanets website) shows the known planets at relative distance to their star, compared to the inner solar system planets.

The authors of today’s paper observed transits of TRAPPIST-1 d, e, f, and g with the Hubble Space Telescope (HST). Using HST for their atmospheric recon mission, these scientists have made observations that indicate these planets are terrestrial and potentially habitable.

First, the authors took measurements in white light to find the transit timing and depth of the four planets. The transit depth and timing give scientists a better understanding of the geometry of the planetary eclipse, the period, and radii ratio of the star and planet.  They compared these to previous observations and found that they were in good agreement. The results of this can be seen in Figure 2. 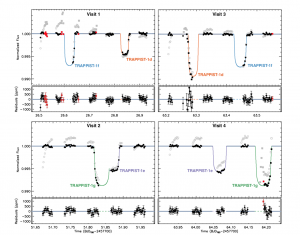 Figure 2: This image (Figure 1 in paper) shows the light curves for each of the observed TRAPPIST 1 planets.

After getting light curve measurements, the researchers then analyzed the light curves in 10 spectroscopic channels (1.15–1.65 μm) and fit for wavelength-dependent transit depth. The transmission spectra are shown in Figure 3. Using these light curves and spectra, the authors then were able to uncover some clues about the atmospheres of these four planets. 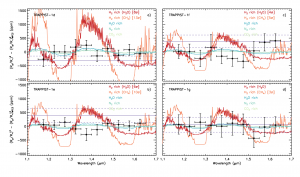 Figure 3: This figure (Figure 2 in paper) shows the spectra for each of the observed planets. The data points are shown in black while several models corresponding to varying atmospheric compositions are shown by the colored lines.

As seen in Figure 3, the transmission spectra have no unusual features which indicate a H2 rich atmosphere; the lines that correspond to H2 rich atmospheric models do not match up with the observations for planets d, e and f.  However, a hydrogen rich atmosphere cannot be completely ruled out for planet g. The authors report that since these planets do not exhibit spectral features at near-infrared wavelengths either, they can also rule out cloud-free hydrogen-dominated atmospheres for these TRAPPIST-1 planets, which points towards potentially habitable atmospheres. For the three nearer planets, many  atmospheric scenarios are possible with the given spectra– the atmosphere could be dominated by H2O, N2, or CO2 (lines are shown in blue, green, and grey in Figure 3).

Due to the amount of starlight received by TRAPPIST-1 d,e, and f,  the authors point out that atmospheric formation theory predicts that aerosols (in this case meaning a group of particular particles well-dispersed in the atmosphere) are not largely present in these planetary atmospheres. Aerosols can be found on Earth (and Titan!) and can be either human-made or nature-made; some examples include fog, dust, geyser steams, haze, and smoke. Most often these aerosols are emitted or formed by condensation. Aerosol formation theories allow the authors to conclude that TRAPPIST-1 d, e, f, and g do not have hydrogen-dominated atmospheres and are therefore terrestrial and potentially habitable.

To further explore the atmospheres of the TRAPPIST-1 planets, the authors report that spectra that allow the identification of aerosols are needed. Luckily, these measurements will be possible with the launch of the James Webb Space Telescope (JWST).