A week in the life of an astronomy postgrad researcher – more average than you might think?

As part of the Astronomy Instrumentation Group at Cardiff University, I often find that my day-to-day activities are sometimes quite different to my fellow astronomy colleagues. Between modelling and measuring the performance of resonating detectors, which are intended for future observations of the Cosmic Microwave Background, I also spend a large portion of my time soldering, chasing wires, and opening/closing big test systems. Inspired by Nathan Sanders’ “A day in the lives of astronomy grad students” bite from 2011, I decided to keep a record of my own activities to provide insight into my own typical week as a postgraduate researcher (grad student). 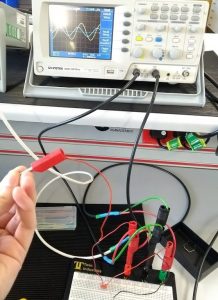 Arriving at work just before 10 am, I started my week by chatting to my supervisor about the data I had been analysing over the weekend. 40 minutes later, with my workload increased substantially, I was back in my lab acquiring more data. Before I knew it, it was already midday and almost time to teach.

During term-time, when undergrads are around, I set aside Mondays afternoons for demonstrating duties. For me, this translates to around four hours of supervising first-year students through experiments. To get students started on this week’s experiments, investigating a high-pass Resistor-Capacitor (RC) filter circuit, I opted to do a “live demo”. Naturally, due to the broken wire, it did not work when the students were watching.

The last task of my day was meeting new Pint of Science** (PoS) colleagues, at 6 pm, to discuss what joining the committee would involve, and to show off the chosen venue. 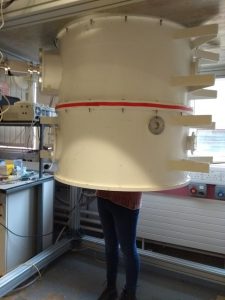 Tuesday: A particularly big cryostat (the white can) which is currently being built in the detectors lab – with my legs for scale. I’m 5ft3.

Tuesday afternoons are for meetings. Thus, Tuesday mornings are also for desperately fulfilling actions set at the previous meeting, and this Tuesday was no different. To break-up data analysis, I spent time in the lab and helped a colleague open a particularly large vessel, a (soon-to-be) cryostat, which will be used to cool our detectors down to 0.1 K.

In a fun twist of events, the meeting was cancelled, leaving very little to distract me from my afternoon of data analysis. Thankfully by 5 pm, it was time to productively procrastinate from PhD life by preparing for my (optional) French class. 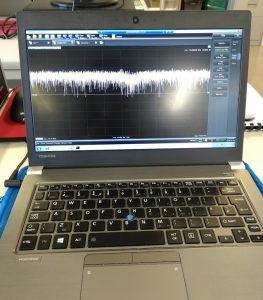 Wednesday: Measuring the performance of my detector – although with the way its set up, its difficult to see the signal buried within the noise.

This particular Wednesday was a no-work Wednesday special. Like many other departments, we have a school seminar series where we invite speakers from other universities to tell us about the exciting work they do. Between not getting into work until 10 am, and a broken experiment, I only managed an hour of useful data acquisition before the seminar. For my PhD topic, and for many others I suspect, this kind of progress is a very common occurrence.

After an amazing seminar discussing how the James Webb Space Telescope and GAIA will revolutionise studying exoplanetary atmospheres, I accomplished one whole hour of looking at my data before it was time for coffee.

In the evening a few members of the group went out for dinner with the speaker and ended up, in typical-style for my department, at bandaoke***. My head didn’t hit my pillow until after midnight. 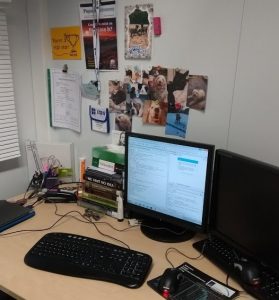 Thursday: Here’s my desk! Complete with the token stack of textbooks, pet photos and double monitor set up. It’s not usually this tidy.

Getting into work in the morning was more of a challenge after a late night, but thankfully the social team came to my rescue with cakes and pastries at the departmental coffee morning. Fueled by caffeine, I continued to look for the signature of my resonating detectors buried within a notably noisy set of data. This iterative process of taking data, looking at it, and adjusting my test set up accordingly took up most of my day.

By 4:30 pm, after too many hours of screen time, I was almost excited to go to the gym. I even skipped the offer of cake, which is provided by a member of the department on a weekly basis.

Like my record of this week, my productivity reduced substantially as the week progressed. By Friday, I was well and truly ready for the weekend and required extra coffee to push through that final bit of analysis. After lunch with a friend,  I lost more than an hour to arXiv as I searched for a paper to present at the following week’s journal club.  At the end of the day, I rushed off to go and pay the deposit for a Pint of Science venue and went home for an evening of the Food Network.

Does a typical week exist?

Upon deciding to report my so-called typical week as a grad student, I expected it to be full of exciting stories of me opening and closing my favourite cryostat, making lots of pretty graphs of nice data and maybe even soldering a wire or two. In reality, it turned out to mostly be a not-so-thrilling week of painfully refining my experimental set-up and analysing noisy data – but that’s just how it is sometimes. So, the only predictable aspect of postgrad life is the unpredictability. Yet for me, at least, it’s half of the appeal.

** Pint of Science is a three-day programme of talks, located in a pub, hosted in 32 cities all over the UK.

*** Bandaoke is Karaoke, but with a live band.

A day in the lives of astronomy grad students