A couple of weeks ago I had the amazing opportunity to attend a local installation of ComSciCon in my hometown of Atlanta, GA. For those who are wondering what a ComSciCon is, it’s short for Communicating Science Conference. ComSciCon was founded by Astrobites and Chembites peeps back in the day, and since then it has expanded greatly. You can learn more about it and where to apply in this post.

But for now, I’m going to spare you the logistics and do the unthinkable: Write a science communication blog post about communicating science.

*Gasp* yes, you read correctly. I’d like to share with you a couple of interesting pointers I picked up from the workshop.

Pop, Talk, and Drop It

Remember, science communication is all about being able to share technical subjects in a way that a layman, or a scientist not in your field, can understand and appreciate. One of the panelists at the workshop stated that you should be able to explain your science to experts in the field, general scientists, and kindergarteners. If a 5 year old can pick up what you are putting down, then you have accomplished something. One of my main take aways was that you can present your topic in a way that is concise but still accurate, that there is a difference between leaving out detail and ‘dumbing something down’ to a point where it is no longer true. 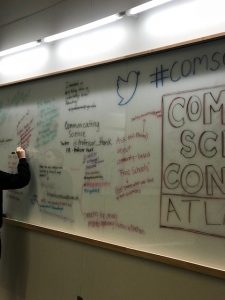 The ‘Collaboration Wall’ at ComSciCon ATL, where attendees offer up their ideas and see if any others would like to participate.

We ComSciCon attendees were able to see this in action through “Pop Talks,” a nifty little terrifying exercise practiced at the national ComSciCon. Basically, you get up in front of everyone and explain your research in 60 seconds, and if you’re me, you do this while sweating and stuttering. The audience holds up cards saying ‘Jargon’ or ‘Awesome’ during the speech in order to give you immediate feedback. A jargon word is typically a scientific term that requires further explanation. For instance,  during my Pop Talk I used the words ‘primordial dust,’ and I saw the jargon cards fly up at the speed of light. I could have used another phrase, such as ‘old dust’ or ‘dust that formed with the star.’ See the difference? Some details may be lost, but the general idea is still there, and now it doesn’t sound like it’s going to eat you.

One of tips from the panelists was to practice a 24/7 speech. In a 24/7 speech, you have 24 seconds to unload a technical description of your research. Even more intimidating, you then sum up your research in 7 words for the general public.  I think the best one I heard was, “We have no idea what’s going on.” Whether or not you have a clue what nature is doing, this is a great exercise in keeping your words concise. Not only does it help us scientists to capture the essence of our research, it keeps us from using unnecessary big words and phrases (even those that are not science jargon).

Scientists are Funny Too

During the workshop, we got a chance to interact and learn from a couple of scientists who also happen to be stand-up comedians. I felt that this breakout session was incredibly useful, since humor is often times how communicators grab an audience. Here’s what I took away from the experience. 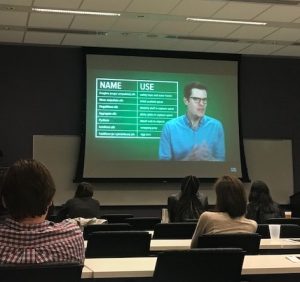 During one ComSciCon session with Joe Hanson, we got to ask him about his personal experiences and watch some of his videos.

From these key points, it is important to realize that you can’t just do jokes and tell science. You have to integrate the jokes and the science for it to be funny. It’s helpful if you can tell a story with your science. The keynote speaker, Joe Hanson, did a great job of stressing this. Find the connections, build the narrative, and from there it should be much easier to blend in some light-hearted humor.

Nowadays, communicating science isn’t just restricted to spoken or written word. There are all types of tools that help us visualize and relay information. One research group at ComSciCon was developing a video game to teach physics concepts, another was printing out hand-held copies of the protein they study using a 3D printer (I may have snagged one). One wonderful human even participates in a science rock band. The possibilities are truly endless. I learned that many universities have Makerspaces where students can get hands on experience with technology like 3D printers, VR, and Raspberry Pi Minicomputers (check if yours has one – mine does!). There are plenty of resources online that can aid in data visualization and teaching, such as powtoons.com, a site I learned about from one of the panelists. Even if you don’t work in a scientific field, these resources are still available to you!

My last piece of advice is to network. Scientists are more welcoming than you think – they are humans too and have been where you are. If you want to improve your science communication skills, reach out, take a chance, and you won’t turn up empty-handed. You can even start a scicomm (short for ‘science communication’) club of your own. Also, get a Twitter account. Apparently this is where all the cool kids talk about science and where politics happens.

In closing, I am so grateful to all of the people who made ComSciCon ATL happen, and who started this fantastic event in the first place. It is truly inspiring to be in a room full of people who are passionate about sharing their love for science. Get out and communicate, because in the words of Carl Sagan, “Not explaining science seems to me perverse. When you’re in love, you want to tell the world.”

Science Journalism: What I learned at the AAS meeting