On March 1st, the first detection of a cosmic 21cm signal by EDGES was published in Nature (see here for an astrobite that discusses the background and explains the experimental results). This got people talking for two reasons. Firstly, because it was the first direct detection of the temperature of the hydrogen gas during the Cosmic Dawn era – a time when the first sources of light were formed – and secondly, because the gas appeared much colder than everyone was expecting. Not only that, but dark matter could have been responsible for that surprise.

Less than a month later and we’ve seen a flurry of follow-up papers (for example here, here and the original theoretical companion here) with different explanations for the detection. Today’s paper agrees with claims that we shouldn’t get too excited – dark matter is probably not the answer (to this particular question anyway).

Cosmic Dawn and how dark matter got involved

If we cross our fingers and hope that there were no problems with the experiment that could make the detection unreliable, we could have some exciting new science on our hands. One idea that got pulses racing was that dark matter – the only thing that could be cooler than the hydrogen gas at that time – could have cooled the gas down (by scattering with the particles in the gas). However, today’s authors, some of whom were initially advocates of that idea, have shown in today’s paper that maybe all of our dark matter dreams won’t be coming true.

Some of the models for dark matter that could explain this scenario, including the one proposed by today’s author on the same day that the detection was announced, assume that the probability that a particle of dark matter will collide and scatter with an atom of neutral hydrogen (called the cross-section) is strongly dependent on their relative velocity. This is necessary because otherwise, Compton scattering would be the dominate form of scattering, and other types of scattering would have little effect. Since we need the dark matter and hydrogen collisions to have a strong effect on the cooling (and since temperatures are super low, with everything moving nice and slowly), a cross-section proportional to 1/v^4 (v is velocity here) is needed to ensure effective cooling.

So far, dark matter explanations for the EDGES signal have assumed this velocity dependence, however today’s authors show that it is difficult to find a particle physics model for dark matter that exhibits this behaviour and evades all other current observational constraints. 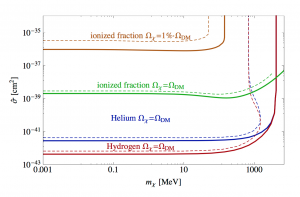 We’ll also need a new ‘force-carrier’ called a mediator (like a photon carrying the electromagnetic force) to go along with our new dark matter particle, that will act as a messenger between the dark matter and the hydrogen.

The authors consider three options for explaining the EDGES signal with these requirements in mind.

If the dark matter is to scatter off the neutral hydrogen atoms (as opposed to the particles that make them up), the mediator will also need to mediate a new force – a fifth force – between dark matter and any of the particles in the standard model. This set-up is already strongly constrained by fifth-force experiments and all explanations of this type for the EDGES signal are ruled out.

Instead, the dark matter could be scattering off free electrons and protons. However, this cross-section needs to be even larger than it is for the hydrogen atoms (shown by the green line in figure 1) and the dark matter particle talks to the standard model particles via a hidden photon. This scenario is also very tightly constrained by various experiments and ruled out as an explanation for the EDGES signal.

One option that remains is for the dark matter to be milli-charged, that is, to have a charge that is much smaller than the charge of an electron. This is promising because the dark matter talks to the standard model particles via the usual photon in this scenario, which we at least already know exists! While there are lots of constraints on this interaction too, there is a small window of opportunity for 1% of all dark matter to be made up by milli-charged dark matter particles, and this sub-dominant component could explain the EDGES signal. The brown line in figure 2 represents values of the mass and charge of a dark matter particle that could explain the signal, and there is a small range of values towards the right-hand side of the plot that isn’t in any of the disallowed (coloured) regions. However, the other 99% of the dark matter would still be unexplained and up for grabs. 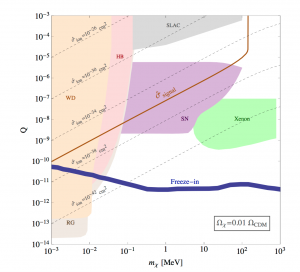 Figure 2: Plot of charge vs mass for a possible milli-charged dark matter candidate. The brown line represents values that could explain the EDGES signal if 1% of the dark matter in the Universe is made up of these milli-charged particles. The coloured regions are disallowed by various experiments, therefore only a small range around the mass of 100MeV is allowed. Plot from today’s paper (Barkana et al.)

Sadly, despite the initial excitement, it’s looking like this particular idea for dark matter isn’t responsible for the unexpected EDGES signal after all. However, the race is still on to back up the results of the experiment with new detections, and then to work out what exactly is causing the discrepancy if dark matter isn’t to blame. For now, the nature of dark matter remains elusive… until the next tantalising detection comes along.