Title: Further insight on the hypervelocity white dwarf, LP 40-365 (GD 492): a nearby emissary from a single-degenerate Type Ia supernova

I’m sure you’ve heard of Type Ia supernovae. They’re a certain type of exploding star, most famous for the fact that their brightness can be easily calculated from the other features of the explosion. If you know how bright something is, and you measure how much of the light reaches you, that tells you how far away the light source must be. (“Standard candle” is the common term for objects like this.) Type Ia supernovae are useful to astronomers who want to measure the distance to far-away galaxies, and they form one link in the cosmic distance ladder.

Despite how useful Type Ia supernovae are, we still don’t fully understand how they happen. We know that you need a white dwarf, and you need that white dwarf’s mass to increase until it comes near to a critical point (the Chandrasekhar mass limit, which is about 1.4 times the mass of the sun). What we don’t know is what makes a white dwarf’s mass increase to reach that point. There are two models that we usually consider for how this happens. Firstly, the white dwarf could slowly pull matter from a nearby star. Secondly, two white dwarfs could collide. The two models are often called “single-degenerate” and “double-degenerate”, because “degenerate objects” is another term for white dwarfs (a term related to the physics of their structure). The advantages and disadvantages of the two models have been debated for decades. In recent years the debate seems to have leaned more towards the double-degenerate channel for most Type Ia supernovae, and the single-degenerate channel for some unusual-looking Type Ia supernovae.

Last year, a team of astronomers found a white dwarf named LP40-365. It’s moving through the galaxy incredibly fast (about 500-800 km/s), and contains an unusual collection of elements. The authors of the discovery paper suggest that this is a leftover from a Type Ia supernova — a white dwarf that tried to go bang but survived. Today’s authors studied spectra of the star (from the Copernico telescope) in order to get a better idea what was going on with it. 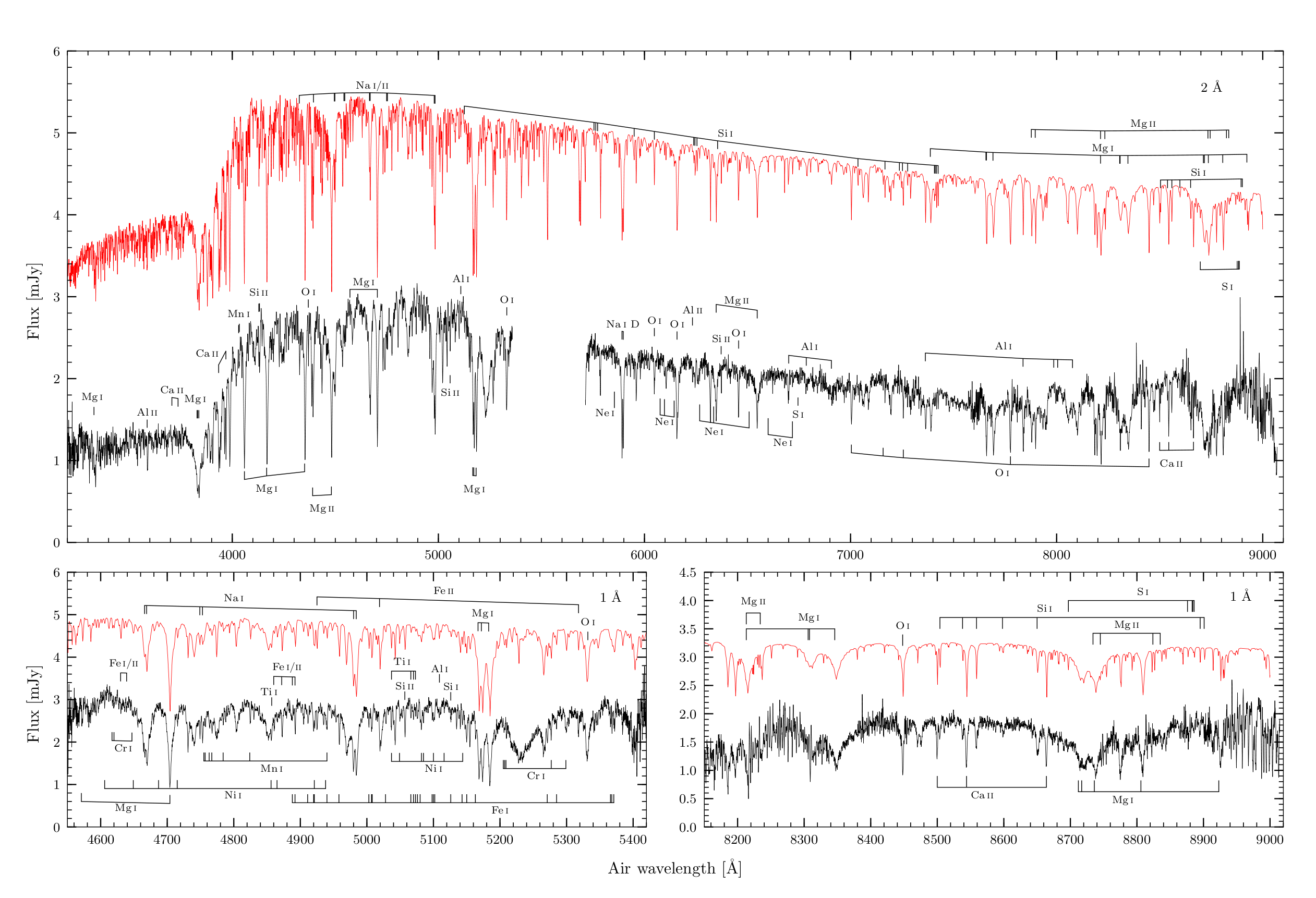 From their spectrum, they measure a temperature of 8000 to 10000 Kelvin (towards the cool end for white dwarfs) and a surface gravity between 100 and 3000 times that of Earth (uncertainties this size on surface gravity are not too uncommon). This surface gravity is very low for a white dwarf, suggesting it has an unusually low mass — which seems to fit with the theory that the white dwarf has been partially exploded. 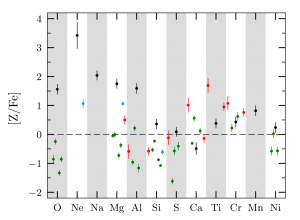 Figure 2: Measured abundances for various elements shown as black dots, scaled so that 0 = the abundance of that element in the sun. For comparison are shown abundances of the same elements for a typical low-mass white dwarf (red), metal-polluted white dwarf (green), and oxygen-atmosphere white dwarf (blue). This is Figure 5 from today’s paper.

The spectrum of LP40-365 is pretty complicated, and shows a multitude of unusual elements. It’s rare that astronomers have to talk about any material heavier than, say, oxygen; in LP40-365 today’s authors found helium, oxygen, neon, sodium, magnesium, silicon, calcium, iron, nickel, sulphur, chromium, titanium, and (importantly) manganese. They measured the abundance of each of these elements (see Figure 2). They found that the white dwarf seems to be around 2/3 helium and 1/3 neon, with other elements being at most 2% of the mass. However, they do stress the difficulties of modelling such an unusual system — the elements interact in ways that aren’t fully understood and hence aren’t included in the modelling code, and there are several features in LP40-365’s spectrum which they haven’t been able to understand.

The presence of manganese turns out to be an important clue as to how this white dwarf formed — specifically, what kind of Type Ia supernova created it. Manganese creation only occurs under high pressures, the type of pressure found in high mass white dwarfs. If the supernova occurred through the single-degenerate channel, this makes sense — our white dwarf has grown to its high mass over millions of years, and so had plenty of time for the pressure to increase in response to the high mass. In the double-degenerate channel, however, our two normal-mass white dwarfs collide and explode almost straight away, and the pressure needed is never reached. The presence of manganese is then a strong sign that this failed supernova formed via the single-degenerate channel.

The authors also note that a remnant with this composition — dominated by helium and neon, with very little carbon — is hard to make from the most commonly considered Type Ia supernova progenitor, a carbon-oxygen core white dwarf. Instead, they point towards a rarer type of white dwarf which have oxygen-neon cores.

In any case, LP40-365 is the first known white dwarf to have survived a (failed) Type Ia supernova, and as such it opens up some exciting prospects for future science.

Genesis of a Violent End: On the Origin of Type Ia Supernovae