Space is a mess. From communicating with people all over the globe to navigating the roads, we have slowly become reliant on the use of satellites in our daily lives. They make us safer and more connected, which means it is no surprise that we’re launching more and more each year. 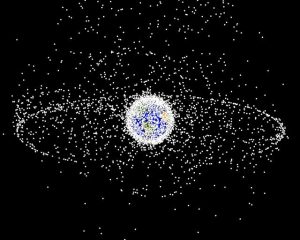 However, between retired payloads, rocket bodies and other fragments, space around Earth, is becoming increasingly cluttered. With more than 16000 objects currently being tracked*, space junk is clearly a massive problem, but dealing with it is not what the authors of today’s paper tackle. Instead, they focus on how to track objects in the first place.

Honey, I lost the satellite

It’s much easier to lose a satellite than you might think. To be confident of a satellite’s position, and to be a member of the Space-Track catalogue, it must be tracked continuously from launch in order to maintain what’s known as its track custody. Satellites are typically tracked using radar techniques from ground-based telescopes but sometimes require bulky, power-draining radio beacons. 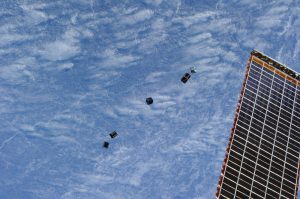 Figure 2: Five CubeSats drifting away after being launched from the International Space Station. Image credit: NASA/NanoRacks

Sadly, if the Sun is more active than usual, or the satellite’s path becomes confused with another, communications with the satellite can be interrupted. Relocation is not an easy task — even for the likes of NASA, who only recently reestablished communications with their IMAGE satellite after 13 years of silence. Moreover, with the ever-increasing popularity of miniature satellites like CubeSats being launched simultaneously by the hundred, it is impossible to track individual satellites as their payload doesn’t allow for a beacon.

Introducing ELROI, the Extremely Low Resource Optical Identifier beacon — otherwise known as the world’s flashiest license plate. The basic concept revolves around a tiny, stamp-sized optical beacon utilising short pulses of laser light as a unique ID number, which can then be detected by anyone with a small telescope and photon-counting detector. 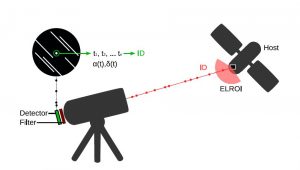 Figure 3: An overview of the ELROI set up. The small laser flashes its unique ID, which is then filtered (red) before reaching the single-photon detector green).  Figure 1 from Palmer at al. 2018.

Other key benefits include:

But the really clever bit is the background rejection:

Because this data analysis technique rejects 99% of all photons, it is possible to recreate the ELROI signal from one overhead pass of the satellite, even if only a few photons are detected — meaning ELROI will be able to identify a satellite within a few minutes.

Much more than a concept

Figure 5: The laser diodes of ELROI in action during pre-launch testing. The silver material is anti-static. Figure 4 from paper.

After passing several ground-based tests, ELROI is now a real-life, space-ready prototype which is currently scheduled for launch into space next month (May 2018). Not only is this very exciting, it also represents the next big step for a potentially vital piece of technology. ELROI lays the groundwork for what could become standard beacon technology for small satellites and things like rocket debris. So, although ELROI doesn’t help with our current space junk problem, it will at least make it easier to track new objects in the future.