Dancing in the dark?

A few weeks ago, van Dokkum et al. published a paper in Nature about the ultra-diffuse galaxy NGC1052-DF2 (closed access, but you can read a great summary here). Using the spectra of globular clusters in this galaxy, the authors concluded that NGC1052-DF2 has a dynamical mass that is very close to the mass of its stars—suggesting that NGC1052-DF2 has much less dark matter than expected for its stellar mass!

This exciting result has generated a lot of buzz (including lots of Twitter debates and even some memes like the featured image), and astronomers have plenty of follow-up questions. First of all, how real is this result? And if NGC1052-DF2 really does lack dark matter, how could such a galaxy form? Finally, how do alternative theories that don’t include dark matter explain this galaxy (and any other galaxies that might be like it)?

It’s only been a few weeks, but already several scientists have begun to write papers in response to van Dokkum et al.’s paper. Today, we’ll watch a scientific debate unfold by taking a look at some of these responses.

Title: Current velocity data on dwarf galaxy NGC1052-DF2 do not constrain it to lack dark matter

As Mark Twain once said, “There are three types of lies: lies, damned lies, and statistics.” That’s the main point of this paper by Martin et al.

The original van Dokkum et al. paper measured the spectra of 10 compact objects in NGC1052-DF2 (which are thought to be very bright and large globular clusters) and used the redshift of various absorption lines to determine the line-of-sight velocities of these objects. These were then used to determine the velocity dispersion of the galaxy, which can be used as a measure of the dynamical mass enclosed within some radius. The dynamical mass presumably includes both dark matter and stars, so it can be compared to the mass of stars alone to decide whether or not a system is dark matter-dominated.

However, doing any sort of statistical analysis with just N=10 measurements (and these measurements are not easy! See Figure 1) is really difficult. It turns out that depending on how you do this analysis, you can get a wide range of different answers for the intrinsic velocity dispersion of NGC1052-DF2. The van Dokkum et al. paper used a frequentist estimator called the biweight dispersion measure. This is similar to the well-known standard deviation but modified to better handle non-Gaussian distributions. (For those who really want to learn more, a more detailed explanation is given in this paper.) 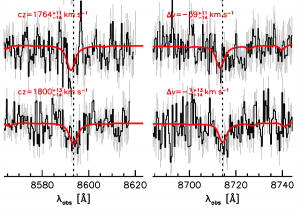 In response, Martin et al. argue that this is not a good method when the sample size is so small; instead, they say that one should use a generative model—that is, one should define a model first (they assume a Gaussian distribution with some fraction of contamination by a uniform distribution) and then maximize the probability of that model generating the observed data.

There’s also a lot of debate about one particular compact object, GC-98, which is a clear outlier with a velocity offset of 39 km/s (Figure 1). This is further complicated by the fact that the velocity measurement of this object is not very clean; if you subtract the observed spectrum from the best-fit model, you get residuals that don’t look like random noise (as they should for a “good” fit), so the whole thing is a bit suspect.

The differences in statistical methods used by van Dokkum et al. and Martin et al. lead to different estimates of the physical variable in question: the mass-to-light ratio (Figure 2). This ratio helps quantify how dark matter-dominated a system is; a high mass-to-light ratio implies that there’s more mass than can be accounted for by luminous matter alone, so there must be dark matter. However, van Dokkum et al. emphasize that most of their results are based on an upper limit on the intrinsic velocity dispersion of

km/s. This is actually consistent with Martin et al.’s estimate of 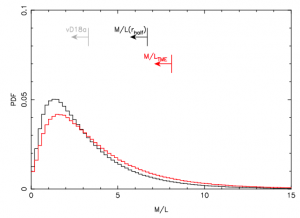 Figure 2. Probability distribution functions (red and black lines) of the mass-to-light ratio (M/L) computed two different ways by Martin et al. Their 90% upper limits are shown by the red and black arrows, while the van Dokkum measurement is shown in grey. Figure 3 from Martin et al.

So it’s likely that there are deeper inconsistencies that have to do with the way the mass-to-light ratio is calculated and interpreted, rather than the actual statistical analysis.

The entire previous section dealt with how the data was analyzed… but what if the data are simply not good probes of the physical system? What if globular clusters are not actually good tracers of the dark matter in a galaxy?

That’s exactly what Laporte et al. consider. They use the same method as van Dokkum et al. to measure the velocities of 4 globular clusters in Fornax dSph, a dwarf spheroidal galaxy (located in the constellation Fornax) that is a satellite of the Milky Way. Fornax dSph is very well-studied—velocities for thousands of individual stars in Fornax dSph have been used to measure the galaxy’s dynamical mass and determine that it is dark matter dominated.

Laporte et al. show that relying on the kinematics of globular clusters alone can easily underpredict the dynamical mass of Fornax dSph, which would lead to the false conclusion that Fornax dSph lacks dark matter. This systematic uncertainty is made worse when the globular cluster velocities have significant errors, and even worse when the sample size is small. They also show that Fornax dSph and NGC1052-DF2 are not particularly unusual for ultra-diffuse galaxies (Figure 3), so this kind of underprediction is not “special”—it’s just that globular clusters really aren’t great tracers of total mass. 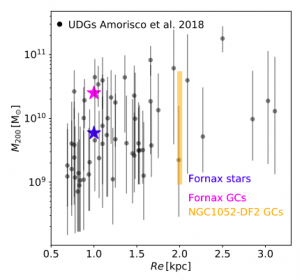 Figure 3. The mass of the dark matter halo (called

) as a function of the effective radius (Re) of various ultra-diffuse galaxies (black points). The pink and blue stars show two different measurements of the mass of Fornax dSph using different methods. The inherent uncertainty in these methods means that measuring the amount of dark matter in a galaxy like NGC1052-DF2 with globular clusters is highly uncertain (yellow bar). Figure 4 from Laporte et al.

Are we stuck in the dark?

The papers discussed above are not the only responses to the van Dokkum et al. paper. Some responses have considered how theories that don’t have dark matter, such as Modified Newtonian Dynamics (MOND), might be able to produce a system with a low velocity dispersion like NGC1052-DF2. Other groups have measured the dynamical masses of more ultra-diffuse galaxies, showing that there may be other such galaxies that appear to lack dark matter.

Today’s papers, which point out potential flaws in the data and statistical analysis of van Dokkum et al., illustrate just one thread of many in an evolving scientific dialogue. In fact, this particular type of conversation occurs nearly every time a new result is announced, because the nature of science is rooted in skepticism (and scientists love Twitter debates).

As Carl Sagan once famously said, “extraordinary claims require extraordinary evidence.” A galaxy that has much less dark matter than expected is definitely an extraordinary claim. Is the evidence extraordinary enough to hold up? Today’s papers argue that it’s not; the authors of the original paper might argue otherwise (you can see P. van Dokkum’s response to some of these responses here). We may need more data to know for sure, but in the meantime you’ll have to decide for yourself.