Title: Snake in the Clouds: A new nearby dwarf galaxy in the Magellanic bridge

The Magellanic Clouds are two prominent splotches of light visible in the sky of the Southern Hemisphere. Named for their relative sizes, the Large Magellanic Cloud (LMC) and the Small Magellanic Cloud (SMC) are two dwarf galaxies, satellites of the Milky Way which are believed to have been pulled into the domain of our galaxy some several billion years ago. During this accretion event, gravitational interactions flung a wide field of debris from the Clouds. While studying the Magellanic Bridge between the two Clouds, the authors of today’s paper found another piece of the puzzle: an intriguing little dwarf galaxy occupying the bridge of debris. Dubbed Hydrus I after the constellation of sky it occupies, a preliminary investigation of this ultra-faint dwarf galaxy (UFD) is the focus of today’s paper. 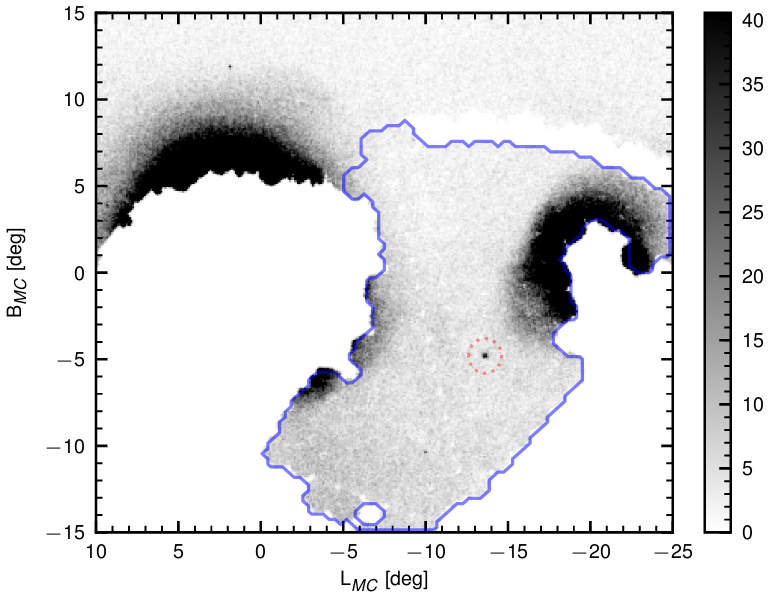 Figure 1: The density of stars in the Magellanic Clouds region, where the blue contour indicates the area of the sky included in the photometric observations of today’s paper, and the x and y axes show the coordinates using the Magellanic Stream coordinate system. The dashed red circle picks out the overdensity in stars later identified as Hydrus 1. Figure 1 in the paper.

Examining their photometric data of the Magellanic Bridge, the authors locate an overdensity in stars between the two Magellanic Clouds (see Figure 1), and create a color magnitude diagram (CMD), a variant of the Hertzsprung-Russell Diagram to study the colors of the stars in this little blob. Doing so, they are able to easily identify a Main Sequence, as well as several Red Giant Branch (RGB) and Blue Horizontal Branch (BHB) stars, both of which are useful in confirming distance measurements. Spectroscopic follow-up of these BHB stars reveals that Hydrus 1 is about 27 kiloparsecs (kpc) away from the Earth. Also using spectroscopic data, the authors measure the radial velocities of 235 potential member stars in the blob, finding slight evidence of a velocity gradient across the galaxy. In other words, Hydrus 1 appears to be rotating. Although uncertain, if confirmed by follow-up observations, it will be the first UFD known to exhibit rotation. 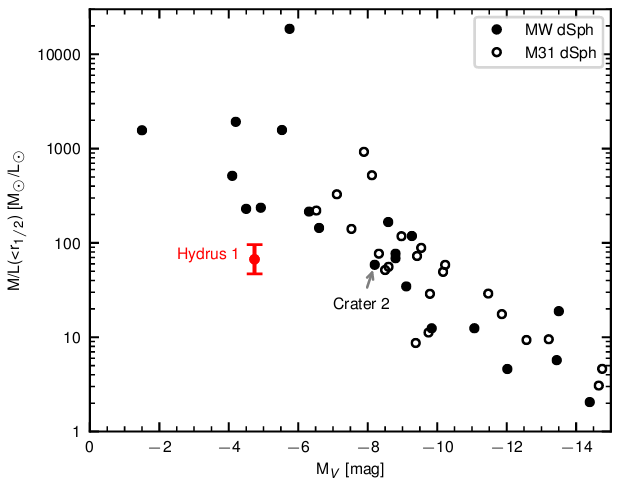 Even though the traits of Hydrus 1 seem to place it squarely in the “ultra-faint dwarf galaxy” category, compared to similar dwarfs, it is a bit on the small side. With a half-light radius of only 50 parsecs (pc), it is worth wondering if it might be another beast altogether, an “extended globular cluster” (EGC). Whereas typical globular clusters have radii less than 10 pc, EGCs are a bit puffed up and can be on the order of 20 pc. Meanwhile, known Milky Way and Andromeda dwarf satellites range from roughly 15 pc to over 1 kpc in radius. Although Hydrus 1 shows very similar characteristics to both classes of objects, direct comparison with other UFDs of comparable brightness shows that it has an abnormally small mass-to-light ratio (M/L), whereas a high M/L is a key trait used to define UFDs (see Figure 2). The authors speculate that, if Hydrus 1 truly is a UFD, the low M/L could be due to tidal disruption with other structures or due to a unique formation history. Another possibility is that the velocity and inclination of the rotation of Hydrus 1 is affecting the estimate of its mass, making it appear to contain less dark matter, thus leading to a smaller inferred M/L.

Hydrus 1 has an orientation in the sky that conspicuously places it in perfect alignment with the motion of the Magellanic Clouds. This suggests that this dwarf galaxy is somehow kinematically related to the accretion of the Clouds by the Milky Way. Using a simulation of the Magellanic Cloud accretion event, which predicts the subsequent motion of debris from the Clouds, the authors check to see if this UFD is aligned with the Magellanic Cloud debris in position and velocity space (see Figure 3). When examining the behavior of the simulated debris particles, the authors find that in this position-velocity space, the UFD lines up with material that was stripped off the LMC anywhere from 0.1 to 0.3 billion years ago, specifically on the leading edge of debris. Based on these results, it seems likely that Hydrus 1 could have originally been a satellite of the LMC, ripped away by its interaction with the Milky Way and SMC, and thrown into the leading debris field less than one billion years ago.

From their spectroscopic data, the authors were able to determine the iron, magnesium, and carbon content for the member stars of Hydrus 1. This is useful for determining the length of time for which the structure has been forming stars. The authors find that while the majority of member stars have a high abundance of magnesium to iron, indicating a short period of star formation, some stars show an elevated iron abundance, indicating that these stars formed from gas that had been enriched by Type Ia supernovae. This trend has been observed in other UFDs, and the consensus is that this occurs because of poor gas mixing throughout the galaxy, leaving discrete pockets of Type Ia-enriched gas while other gas is influenced only by Type II events. These abundances place a range on the total allowed time for star formation, from 100 million years to 1 billion years.

Figure 3: Distribution of the line-of-sight velocities of particles in the simulated LMC accretion event, where the position of Hydrus 1 is noted with a black star. Although it doesn’t line up perfectly with the distribution of all the LMC debris, when isolating particles which were stripped away between 100 million and 300 million years, the location of Hydrus 1 lines up well with the leading edge of the debris field. Figure 13 in the paper.

While much of today’s paper focuses on understanding the nature of the Hydrus 1 satellite, this discovery is of interest because it provides astronomers an opportunity to investigate a more exotic mystery: dark matter annihilation. For the uninitiated, no one is quite sure what dark matter is made of, although there are several theories. One possible candidate is something called a Weakly Interacting Massive Particle, or a WIMP. A special feature of these as-yet theoretical particles is that they are their own antiparticles, so if two WIMPs happen to pass too close to one another, they will both be annihilated, releasing a single gamma-ray photon. Detection of this gamma-ray signal from known dark matter structures would be evidence in support of this theory, and would assist in pinning down the true identity of dark matter. The authors of this paper support Hydrus 1 as a viable observational target in the search for dark matter annihilation signatures because of its proximity to the Earth. After estimating the density profile of the dark matter halo housing Hydrus 1, and assuming a particular particle physics model for the behavior of WIMPs, the authors predict the gamma-ray signal one should expect from the galaxy (see Figure 4). Comparing their prediction to data obtained with the Fermi Large Area Telescope, they conclude that the observations show no evidence for a detection of a dark matter annihilation signal. 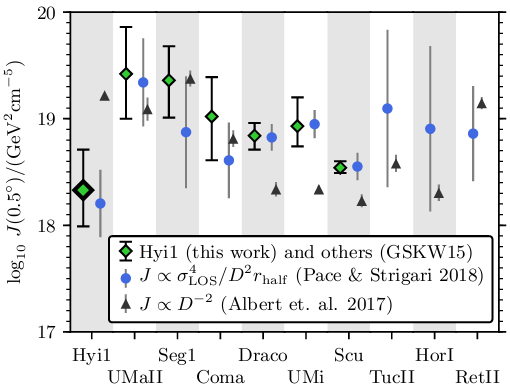 Figure 4: The predicted emissivity from Hydrus 1 (abbreviated Hyi1) due to dark matter annihilation. The different symbols indicate the differing particle physics models used to calculate the gamma-ray signal, while other columns are the predictions for other Milky Way dwarf spheroidal galaxies. Figure 15 from the paper.

The discovery of Hydrus 1 provides another puzzle piece bringing us one step closer to completing numerous pictures, among them the differences between extended globular clusters and ultra-faint dwarf galaxies, the origins of the ultra-faint dwarfs, and the state of the Magellanic Clouds before they were captured by the Milky Way. As usual, more observations will be necessary! In particular, further observations to clarify the exact positions and motions of the component stars and confirmation of the uncertain velocity gradient will help tell us where Hydrus 1 came from and perhaps where it is going.