Title: A population of dwarf galaxies deficient in dark matter

The effect of dark matter on galaxies was first observed back in the 1920s by various astronomers. When studying the rotation of the outer parts of the galaxy, they could see it was going much faster than it should be given the mass of the galaxy (estimated from the light emitted by the stars). It was therefore inferred that there must be more mass in the galaxy that we can’t see. Moreover, it wasn’t just a little bit of mass that we couldn’t see, it was 5 times the mass of the visible stars within the galaxy.

The clip above shows how we would expect the stars to rotate around the galaxy on the left. However, that’s not what we see. What was see is on the right, where the stars seem to orbit the centre at roughly the same rate, no matter their distance from the centre. Source.

How much dark matter exactly do we expect?

Within the standard cosmological model, dark matter makes up approximately 27% of the Universe, whereas normal matter, known as baryons, only makes up 4.6%. It is thought that dark matter is spread all through our Universe. It is not smoothly distributed however. It is formed of filaments, very much like a very disorganised spiders web. These filaments join together at certain points, and it’s at these points where we have a lot of dark matter where the biggest galaxies form. A large group of dark matter particles causes a deep potential well, in which gas can fall in and form the first stars and build up a whole galaxy. The more dark matter there is, the deeper the potential well and the larger the galaxy that forms there.

Today’s paper presents 19 galaxies that seem to be mostly baryons well beyond the half optical light radius, rather than being dominated by dark matter as expected. 14 of these galaxies are isolated galaxies, meaning they have no nearby larger galaxies which may be affecting them. 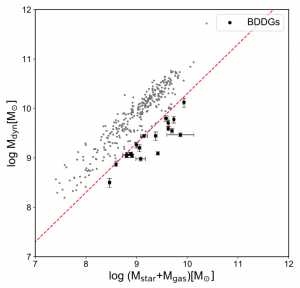 Plot showing the mass in gas and stars on the x-axis (inferred from the optical light emitted) and the dynamical mass on the y-axis. The dynamical mass is the mass which is influencing the rotation (or the dynamics) of the galaxy. This is therefore all of the mass within the galaxy which interacts gravitationally, i.e. stars, gas and dark matter. Figure 2 from paper.

Suggestions for this are that these galaxies have interacted with other galaxies in the past in high density environments, causing tidal stripping which removes baryonic material from galaxies. This is also seen in some hydrodynamical simulations. However, only 5 galaxies within the sample appear to be near any companions making this an unlikely explanation. Another reason could be that strong supernova feedback could expel gas from the galaxy, creating a less deep potential well. Dark matter could then be removed to the outer region of the galaxy following the gravitational changes of the expelled gas. More cold gas could still fall in to the galaxy (which is essential for star formation) but without the dark matter.

The authors also discuss the possibility of systematic errors in their observations as an explanation. When studying the rotation of galaxies, assumptions and estimates must be made of the inclination of a galaxy. Incorrect inclination values would lead to an under-estimate of the rotation speeds and therefore an under-estimate of the overall mass. However, comparing to simulations as well as estimating any mis-alignment issues they find a distribution of masses as expected, suggesting these low dark matter content galaxies really do exist.

Further observations can now be taken of these galaxies in order to understand more properties about them and to confirm whether they are really so deficient in dark matter. It is always assumed that wherever the dark matter goes, the normal matter follows. Further studies will show if this is a result of an event in which the stars and gas were removed from their dark matter host, whether some internal processes are pushing the dark matter out of the galaxy, or if we really need to readdress our understanding of galaxy formation as a whole.

About Jessica May Hislop