Antineutrinos, Left-Handed Molecules, and You

Scientists are enamored with the search for life. They’ve scoured spectra for hints of life-supporting gases in the atmospheres of exoplanets. They’ve assessed the friendliness of galaxies near and far, and found the universe to be an unforgiving place. They’ve plumbed the depths of the oceans and studied pristine Antarctic lakes to understand the harsh conditions life might be able to withstand elsewhere in the cosmos.

The search for life on other worlds has been guided by what we know about life on Earth. Life as we know it depends on amino acids to survive. Today’s paper explores the effects of exotic astrophysical settings on amino acids, which could tell us something about how life came to be on Earth — and where else in the universe life like Earth’s might be found.

The Stuff of Life

Amino acids — important components of proteins — have a property called chirality or handedness. Much like left and right hands, which are mirror images of each other, chiral molecules come in left- and right-handed pairs. These pairs of molecules contain the same atoms and the same chemical bonds, but no amount of turning, bending, or wiggling can make them look exactly the same, as Figure 1 shows.

Right-handed amino acids are rare in nature, and all multicellular Earth life depends on amino acids that are left-handed (with the exception of glycine, which is the same as its mirror image). This is weird. If you whip up a batch of your favorite amino acid in a lab (such as in the famous Miller-Urey experiment and subsequent experiments that demonstrated that lightning could kick off the formation of amino acids in the primordial soup), the molecules will be roughly 50-50 left and right handed — so why does life have a preference for left-handed amino acids?

Where Does Left-Handedness Come From?

The authors of today’s paper suggest that a preference for left-handed amino acids can be caused by a combination of a strong magnetic field and a source of electron antineutrinos.

First, assume that amino acids are orbiting an astrophysical object that emits lots of antineutrinos and has a strong magnetic field, such as an expanding supernova, a massive Wolf-Rayet star, or a newly born neutron star. These amino acids could be present on the surface of dust grains or embedded within meteoroids or planets. Then, as the molecules are pummeled with antineutrinos (

), some nitrogen atoms are converted to carbon atoms following this process:

If the nitrogen atom is converted to a carbon atom, the molecule will no longer be an amino acid, since amino acids are defined as having an amine (NH

) and a carboxyl (COOH) group. The likelihood of this process occurring depends on how the spins of the antineutrino and the nitrogen atom are aligned; if the spins are parallel, as shown on the left-hand side of Figure 2, the process is much less likely to happen than if the spins are misaligned. 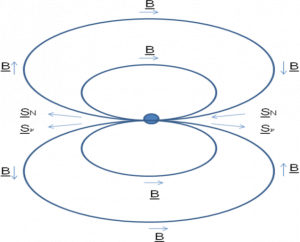 ) are shown with light blue arrows. Image from richardboydastro.com.

Are We All Aliens, Then?

Does life on Earth owe its origins to meteorites processed by antineutrinos and magnetic fields? Maybe, maybe not. There are many hypotheses for how life acquired its taste for left-handed amino acids, and they don’t have to be mutually exclusive. One thing is for sure, though: We have a lot to learn about chiral molecules — and amino acids in particular — in space. While glycine, an achiral amino acid, has been discovered everywhere from the interstellar medium to the atmospheres of comets, the first chiral molecule in space was discovered only in 2016. Perhaps the first chiral amino acids will be discovered in the tumultuous region around a newborn neutron star. If so, Earthlings can look on from afar and give them a wave. Left-handed, of course.