Probing the source of a mysterious (dark matter?) line in the laboratory

Over the past several years a mysterious spectral line at 3.5 keV has been identified in deep exposures carried out by many X-ray observatories, including Chandra, XMM-Newton, Suzaku, and NuSTAR. With most known atomic emission candidates ruled out and no known astrophysical origin, a dark matter source was hypothesized as the culprit producing this line. Indeed, there exist some dark matter models that predict the monochromatic emission of photons as part of the process of dark matter decay. Most notably sterile neutrino dark matter, a model that proposes a fourth, weighty and ‘sterile‘, neutrino flavor as the dark matter, predicts the emission of a 3.5 keV photon in the decay of a 7 keV sterile neutrino particle. However, the tables listing atomic transitions and their corresponding energies are quite incomplete, and often based on theoretical models that can be unreliable. As such, any assumption that a spectral feature has a dark matter origin, that is based mostly on its absence in tables of spectral data, is tenuous at best.

As a solution to this problem the authors attempt to produce the 3.5 keV line in the laboratory, motivated by a theoretical prediction of Liyi Gu, Jelle Kaastra, et al. (2016), wherein

ions can steal electrons from a neutral atom during collision, a process known as charge exchange. These newly formed excited states will then radiatively decay to the ground state, releasing X-ray photons of the appropriate energy in the process. Gu and Kaastra argued that this process is ubiquitous whenever a hot plasma interacts with a neutral medium, and so should be expected for galaxy clusters where the hot intracluster medium interacts with cold clouds around the central galaxies. In order to test whether the charge exchange process with Sulfur ions can indeed produce an X-ray line near 3.5 keV, the authors of today’s paper use the experimental apparatus shown in Figure 1. 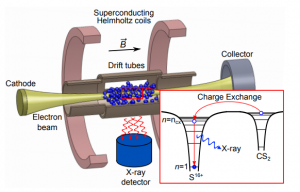 Figure 1: Schematic drawing of an electron beam ion trap. The electrons emitted at the cathode are forced to collide with

molecules at the trap center. Highly charged sulfur ions are produced and trapped within the electron beam. During the beam-off mode (inset), the magnetically trapped sulfur ions interact with neutrals through charge exchange and emit X-rays. (Figure 1 in the paper)

The authors utilize an electron beam ion trap, a device that both produces and then confines highly charged ions. Electrons are accelerated from the cathode towards the

molecules inserted into the center of the trap and produce both

ions. The beam is then turned off but the highly charged ions are kept magnetically confined.It is critical to have the electron beam off during this period in order to distinguish the X-ray emission due to charge exchange from the large amount of X-ray emission produced during the electron-impact excitation. Recombination and charge exchange are then observed with the X-ray detector depicted in Figure 1. This detector has an (FWHM) energy resolution of ~150 eV which, while not competitive with the energy resolution of micro-calorimeters, is very close to the spectral resolution of current observatories like Chandra and XMM-Newton that have claimed detection of the 3.5 keV line. 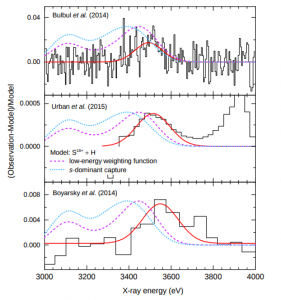 Figure 2: Astrophysical observations of the 3.5 keV line reported in 3 separate papers, compared to the contribution from charge exchange. Red solid lines are gaussians fit to the underlying X-ray data in black. Blue and purple curves are the modeled data from the authors, produced using two slightly different modelling techniques. (Figure 6 in the paper)

The authors found strong evidence that decay from a highly excited state of the Sulfur ions, occupied due to charge exchange between the Sulfur ions and a neutral gas, can produce a spectral feature at 3.47 ± 0.06 keV, which is very close to the claimed lines found around 3.5 keV in astrophysical X-ray spectra. Furthermore they find other X-ray lines are also produced in the charge exchange process. Figure 2 shows a comparison between their modeled data and residuals from X-ray observations of the astrophysical line reported in 3 different papers. While inspecting Figure 2 one may wonder why the lower-energy spectral feature at ~3.15 keV predicted by the models is not present in the X-ray observations from the observatories. It turns out that there is another, much stronger, transition (

n = 2 → 1 ’triplet’ lines) that produces a line near 3.12 keV which is already fit for in the photon excess data produced in the Bulbul, Urban and Boyarsky et al. papers.  The authors further claim that even small uncertainties in the spectral models used in the Bulbul, Urban, and Boyarsky et al. papers can explain the apparent shift to slightly higher energies that is clear when comparing the spectral feature from the X-ray observatories to that produced in the charge exchange process. Either way, the authors claim that the transitions observed in the charge exchange experiment are statistically consistent in energy with the claimed 3.5 keV line, and could explain some, or all, of the signal given the cosmic abundances of Sulfur and Hydrogen in the relevant settings.

While everyone wants to find dark matter, it will be a long hard road. Today’s paper provides some evidence that one of the more recent intriguing hints could just be previously unknown astrochemistry. Further data analysis and targeted searches in dark matter rich and gas poor regions will be needed to close the issue. Hopefully the launch of the very high resolution x-ray observatory XARM in 2021 will be able to resolve many of the competing spectral lines from each other and put the matter to rest.