An element of epic proportions 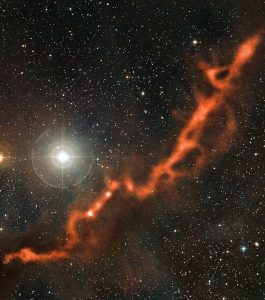 Figure 1: A filament of the Taurus Molecular Cloud, which contains both (1) stars that are newly formed and (2) stars that have yet to form.  Image Credit: ESO/APEX (MPIfR/ESO/OSO)/A. Hacar et al./Digitized Sky Survey 2. Acknowledgment: Davide De Martin.

The simplest known element in the universe, hydrogen, is also the most important.  Hydrogen (aka “H”) plays a crucial role for many of the awesome astrophysical phenomena that have happened (and will happen!) across the universe’s history.  This element fuses in the cores of stars, lights up ionized regions in supernova remnants, and serves as a building block for other elements in the periodic table – just to name a few of its many talents.

But that’s not all this epic element can do!  Its molecular form, H2, is the primary ingredient for molecular clouds, like the one shown in Figure 1.  These molecular clouds are made up of both gas and dust grains.  They are often found within spiral galaxies (like our own Milky Way), and they’re interesting in part because they’re the only known sites where glorious star formation occurs.

To better understand molecular clouds and their glorious star formation, scientists have long studied the timescales for these clouds to form within the less dense, diffuse interstellar medium (a collective term for all of the matter and radiation between star systems) of space.

There have been numerous studies on what could be causing this non-uniformity at such small scales.  But today’s authors look at a possible mechanism that is particularly significant for H2: the formation of tightly-packed dusty clouds and equilibrium gaseous clumps in the diffuse ISM.  We’ll dive into what these clouds and clumps are made of in the next section.

The authors discuss 2 main bits of physics that could form these aptly-named dusty clouds and gaseous clumps:

By these two physics processes, we end up with diffuse ISM that is studded with compact dusty clouds/gaseous clumps, as illustrated in Figure 2.

It all comes together

The authors derived how the rate of H2 formation would change due to these dusty clouds and equilibrium gaseous clumps.  They found that the new rate of formation, compared to the rate if the diffuse ISM was actually homogeneous, increases by a factor ranging from about ~5 to ~10 for typical gas and dust temperatures.

For the typical diffuse ISM values that the authors explored, this increased rate means that the transition from H to molecular H2 in the diffuse ISM could happen in just a few million years.  The authors point out that this reduced timescale has wide astrophysical applications… but first and foremost, it affects how we expect giant molecular clouds, and thus their glorious star formation, to physically evolve.  The faster transition from H to H2 could also affect other chemical species in the diffuse ISM, not just our epic element hydrogen.  But we’ll need more investigation to see for sure!