This guest post was written by Tanvi Karwal. Tanvi is a grad student at Johns Hopkins studying cosmology. She’s a theorist who likes hunting for evidence of exotic kinds of dark matter and dark energy in the cosmic microwave background. She has also dabbled in cosmic rays. In her free time, she draws puns on the blackboards at work when money is short and scuba dives when it is not.

Why should dark matter do yoga?

) and dark matter is cold (i.e. its particles move slowly compared to the speed of light). Each component of 

CDM model has done exceptionally well in describing the large-scale structure of the universe: it accurately predicts features in phenomena such as baryon acoustic oscillations, the matter power spectrum and the cosmic microwave background (CMB). Even in the local universe, measurements of dark energy do not deviate significantly from

 and CDM has had successes explaining galaxy clusters.

CDM might not be the whole picture (or I would be out of a job!). When a 

CDM model is fit to the CMB, the model under-predicts the current rate of expansion of the universe (the infamous Hubble tension). Physically motivating a cosmological-constant-like dark energy has left physicists bending over backwards (even when they’re not doing yoga). Dark matter has not yet been directly detected and models of dark matter remain limited to candidates that are considered to be well-motivated theoretically. Hence, the Dark Sector remains, well, dark – despite some recent progress, our understanding is woefully incomplete.

CDM is not the whole picture, how can we construct a more complete model? One way to assemble the pieces of this cosmological puzzle is to employ a phenomenological approach, rather than deriving the model from first principles. A phenomenological model describes relationships between variables based on experiment and observations, instead of being derived from fundamental theory.


The Generalised Dark Matter (GDM) model, first proposed by Wayne Hu in 1998, is precisely such a phenomenological approach. GDM introduces flexibility into the Dark Sector that is not possible in 

GDM postulates that dark matter is really like an imperfect fluid. In this description, dark matter has a non-zero intrinsic pressure, given by

times its energy density, where

is a dimensionless equation-of-state parameter. Because dark matter has now been imbued with a non-zero pressure, it can have pressure waves with some effective sound speed (just like the speed of sound [link to video] in air is 343 m/s). Additionally, it has a non-zero viscosity that damps the pressure waves.

As the GDM model incorporates pressure, unlike its cold counterpart, we can observe some interesting features from this property alone. As the energy density of any species of particle is proportional to the scale factor

can alter the time at which the universe exhibited matter-radiation equality, the time of the emission of the CMB and therefore changes the features in the CMB itself.

And that’s not all. If GDM has pressure waves, its energy density can oscillate about a mean value. If it is viscous, these oscillations will be damped and decay. GDM therefore changes how matter clusters and hence the shape of the matter power spectrum.

Furthermore, clustered matter forms a gravitational potential well. As GDM continues to oscillate, so does the depth of these wells. CMB photons travelling toward us through the cosmos gain and lose energy to these wells through a mechanism known as the Integrated Sachs-Wolfe (ISW) effect. Photons gain energy by being attracted into gravitational potential wells, and lose energy as they try to climb back out of the wells. If the height of the well changes as the photon is travelling through it, it emerges from the well with a little less or more energy. Hence, GDM adds power to the CMB at the scales where oscillation occurs. 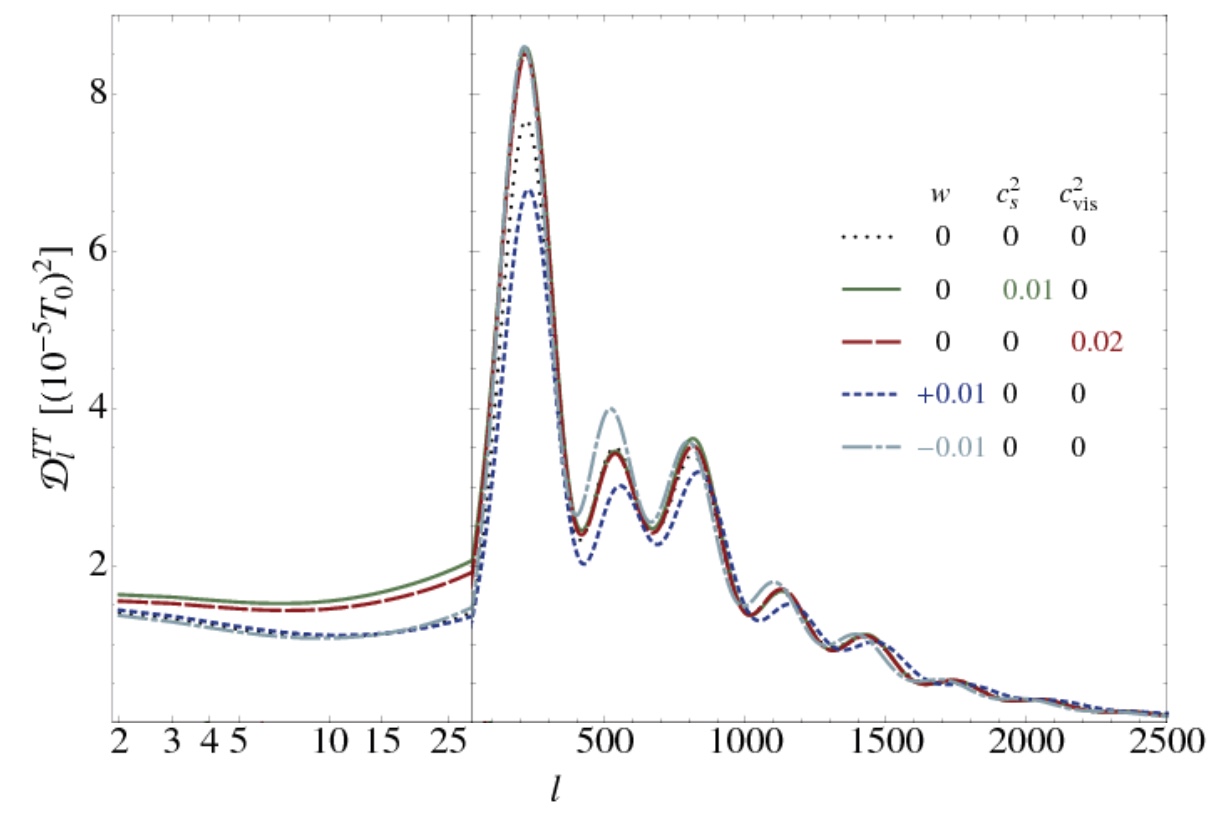 CDM (black dotted line) is compared to that obtained from various GDM scenarios from Kopp et al. Each additional line corresponds to one GDM parameter being varied: (i) the equation of state

(green) or (iii) the viscosity parameter

(red). The ISW effect is boosted at large scales

for the green and red lines. At smaller scales

, the effects of changing

Why does flexibility matter?


The GDM parametrisation is indeed powerful, not just because it allows us to extend the vanilla CDM model, but also because it can be used to model numerous other particle species. If the GDM parameters are assumed to be constant, we can model a cosmological constant, neutrinos and dark radiation, which is a hypothetical form of radiation that mediates interactions between dark matter particles. If they are allowed to vary over time, GDM can model hot and warm dark matter and scalar fields that describe dark energy. Hence, the GDM model allows dark matter to vary its behaviour across different epochs in cosmic history and can better probe the behaviour of particle species such as neutrinos.

Thus, the flexibility of this model does make it more powerful – a very good reason to make dark matter do yoga!