This guest post was written by Jennifer Scora. Jennifer is a first year graduate student at the University of Toronto. She’s currently using simulations to study the formation of exoplanets, focusing on super-earths. When she’s not playing god with exoplanets she likes to read, write, and bake.

Hyper-velocity stars (HVS) are so named because they speed through our galaxy really, really fast. So fast, in fact, that they can escape the gravitational pull of our galaxy (about 300 km/s for the Milky Way). This means that either they are flying in from somewhere else altogether, maybe a dwarf galaxy that collided with us, or they were accelerated to such high velocities by a dramatic event within our own galaxy. There are two widely accepted theories about what this event could be, and HVS stars are often divided into two categories based on which origin story they fit best. One theory proposes that when a binary star system gets too close to the supermassive black hole at the center of the Milky Way it is ripped apart by the strong gravitational forces, leaving one star in a close orbit around the black hole and ejecting the other. However, some HVS have been seen travelling from other parts of the galaxy. These can also be explained with binary star systems, but in this case it is the force of the supernova explosion of one star that ejects its companion and accelerates it to high speeds.

To learn more about the supernova theory, the authors picked a star from the Sloan Digital Sky Survey (SDSS) called PB 3877 to be part of a follow-up study of HVS stars. PB 3877 was observed at a speed of 713 ± 140 km/s with respect to the galaxy, putting it well above the requirements for a HVS. They also traced its trajectory backwards and found it did not originate from the black hole at the centre of our galaxy, ruling out the other main theory (see Figure 1). In order to better classify the star and to learn more about the star’s composition and rotation, the authors used the Keck and European Southern Observatory Very Large Telescope (ESO-VLT) to take higher resolution spectra of the star. 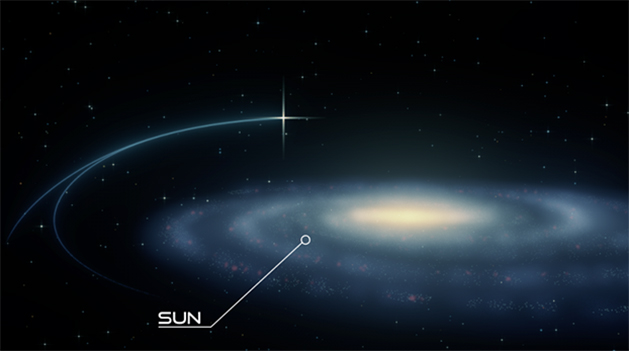 Figure 1: An artist’s representation of the HVS system above our galaxy. The blue trail shows the past trajectory of the HVS. (Credit: Thorsten Brand)

Instead they found something much more exciting. The new data clearly showed that PB 3877 was not alone on its journey through the sky – it had a partner, making it one half of a binary star system. With this new information, they were able to calculate the speed of the binary more accurately. They found it was moving at a much slower 571.3 ± 76.4 km/s, though still fast enough to be classified as an HVS system. This is the first binary star system found to be moving at such incredible speeds, and its existence does not fit into any of the current theories about the origins of HVS. All theories require the star to experience incredibly strong gravitational forces in order to accelerate it to high enough speeds, but based on similar binary systems, the authors estimate the stars are widely spaced and therefore only weakly bound together. This means that any of those strong gravitational forces would tear the binary system apart before it could reach these high speeds, making its survival a mystery. 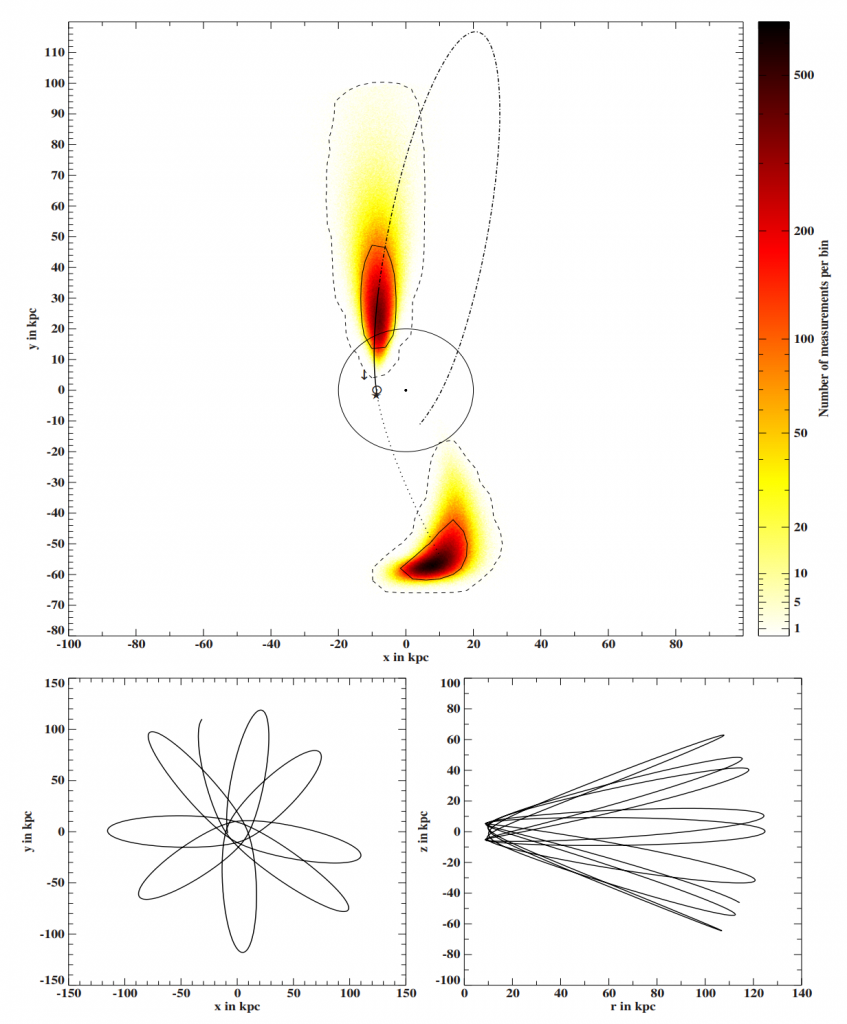 Figure 2: The top panel shows the Milky Way face on. The binary system is represented by the star, and the Sun (open circle) and the galactic center (black dot) are shown for reference. This figure shows the orbits simulated assuming the most massive model of the Milky Way. The coloured areas are where those orbits pass through the galactic disk, and one orbit is drawn out by the dotted line on the figure. The bottom panels show the evolution of one of these orbits over the last 10 billion years. The left panel gives us a perspective when viewing the galaxy face on, and the right panel shows the orbits when viewing the galaxy edge on.

The authors have proposed a few possible explanations for this mystery. The first is that the binary system was part of a dwarf galaxy that merged with the Milky Way, so it is only moving at a high speed relative to our galaxy. However, the lack of other stars moving on similar paths in this area makes this theory less plausible. Another possibility is that the star is not actually a HVS. The velocity required to make a star a HVS depends on the mass of the Milky Way, and the more massive the Milky Way, the higher the velocity needed to escape it. There is still a significant amount of uncertainty in our measurements of the mass of the Milky Way, and so the authors chose to explore what effect changing the mass distribution could have on the binary system. They used three different mass distribution models, with 190, 120, and 200 billion solar masses. The orbits for the most massive model can be seen in Figure 2. In this model, the binary system is almost certainly in a bound orbit, which means that it would no longer be considered a HVS system. For the lower mass models, the probability of the system being in a bound orbit drops considerably to 40%, so it would still classify as a HVS system.

This ties the mysterious binary system to the problem of determining the exact mass profile of the Milky Way and its dark matter halo. If we find that the Milky Way is more massive than previously thought, then this one system will have contributed greatly to our understanding of our own galaxy. If not, this binary system still poses its own very intriguing mystery to be solved.