You’ve probably noticed the action movie trope of “cool guys walking away from explosions”. The authors of today’s paper argue that this cinematic cliche is playing out on a scale much grander than Hollywood. The hero of this cosmic blockbuster is a sub-dwarf O-type star 8.5 kpc away in our galaxy’s halo. The explosion was a supernova in the Galactic disk which may have detonated 14 million years ago.

The vast majority of stars in the Milky Way are orbiting on roughly circular trajectories around the center of the galaxy. Starting in 2005, astronomers have found a handful of stars that don’t obey this rule. These so-called hypervelocity stars are speeding away from the galaxy at such high velocities that the galactic gravitational potential will not be able to stop them. These stars will leave the Milky Way entirely and travel off into intergalactic space. Many of these stars are on trajectories originating near the center of the galaxy, as predicted by Hills in 1988, and were likely flung outward in an interaction between a binary star system and the central supermassive black hole. The authors of today’s paper focus on the fastest of the hypervelocity stars, called US 708. 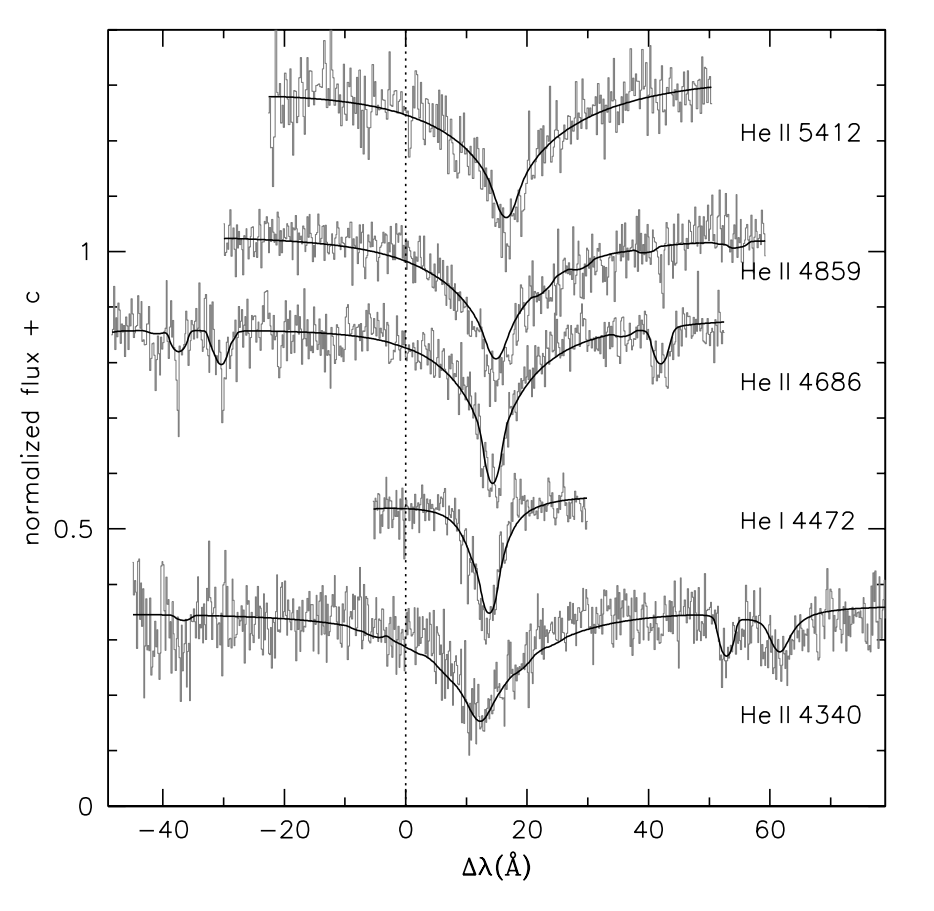 Figure 1: Spectra of US 708 showing the redshifted absorption lines due to the star’s large radial velocity. The lines are themselves broadened due to the fast rotation of the star.

To determine the trajectory of US 708 in space, the authors first measured the radial velocity of the star along our line of sight using spectra. Measuring the Doppler shift in absorption lines coming from the star (Figure 1) , the authors found that US 708 is moving away from us at 900 km/s. But this is just the motion along the line-of-sight. To solve the full motion of the star through space, the authors measured its proper motion using images obtained over 50 years from the Digitized Sky Survey, Sloan Digital Sky Survey, and PanSTARRS. The measured proper motion in shown in Figure 2. Together, these observations indicate that the star is moving at about 1200 km/s away from the disk of the Milky Way. Now we know where the star is going, but where did it come from, and how was it ejected from the galaxy? 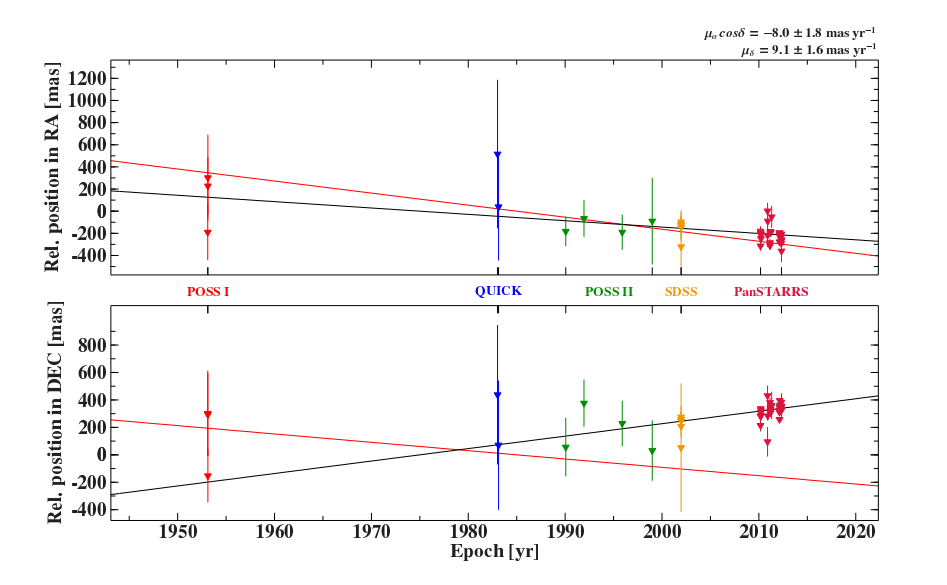 Figure 2: The right ascension (top) an declination (bottom) of US 780 over a 54 year period, taken from various imaging surveys. The black lines are the best-fit, representing the observed proper motion. The red lines show the proper motion necessary for the star to have originated in the galactic center.

Where in the galaxy did this runaway star come from? In Figure 3, the likely region of the galactic disk is shown. Using a model of the galactic gravitational potential, the authors run dynamical simulations of the star’s past trajectory, and determine where the star intersects the disk of the Milky Way. These simulations show that US 708 did not originate near the central supermassive black hole, but was most likely ejected from the disk about 8 kpc from the center. This rules out the traditional ejection mechanism – US 708 was not hurled out into space by the galaxy’s black hole. So how did this star get its hyper velocity? 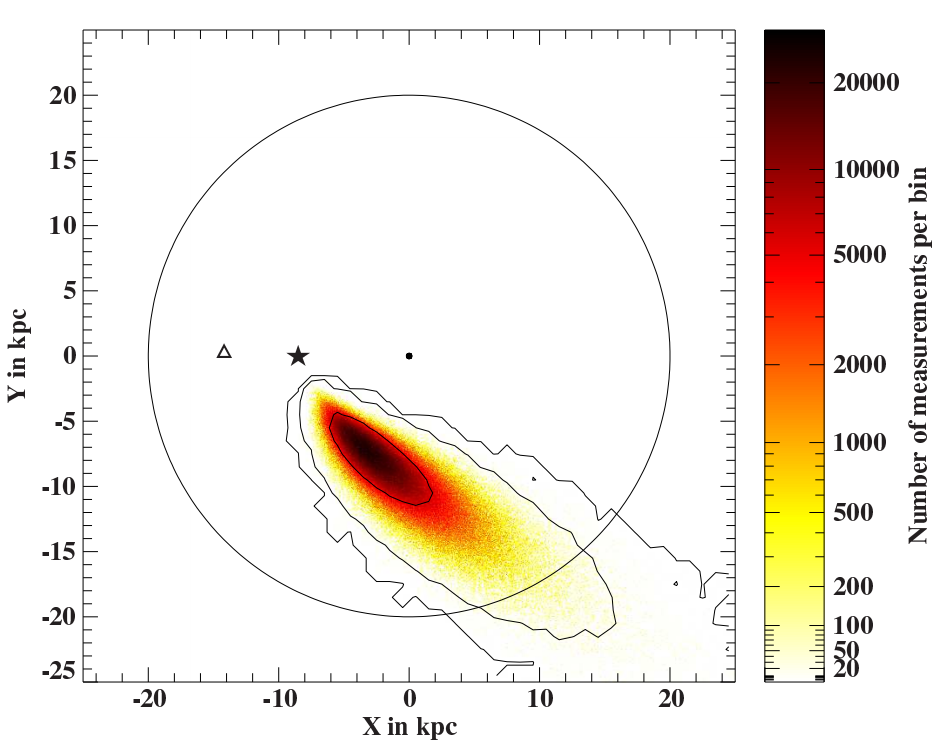 Figure 3: Results of Monte Carlo simulations of the past trajectory of US 708. The view is top-down on the galaxy. The black dot marks the galactic center, the star marks the location of the Sun and the triangle marks the projected position of US 708. Each colored pixel represents the number of simulated paths that passed through that point in the galactic disk. None of the simulations took US 708 anywhere near the galactic center, ruling out an interaction with the central black hole as the ejection mechanism.

The authors propose that US 708 was part of a binary system, orbiting closely around a white dwarf. The two stars were close enough that the white dwarf pulled material from US 708 and eventually detonated in a Type Ia supernova. The supernova released US 708 from its tight orbit, and US 708 flew along a straight line with the same speed at which it was orbiting. The closer the binary system, the faster the ejected star. The observed velocity of US 708 indicates that this progenitor binary system had an orbital period of only 10 minutes! Another hint that US 708 originated in a close binary its rapid rotation. Take another look at the spectra in Figure 1. The absorption lines are broadened due to a rotation velocity of about 100 km/s, which makes US 708 by far the fastest rotating runaway star known. In a close binary, the rotation of each star is synchronized with their orbits, known as tidal locking. As we have seen, the orbital velocity of this system is very large, so the ejected companion will be rotating quickly.

If a supernova was responsible for ejecting US 708 from the galaxy, this hints at an unusual flavor of Type Ia supernovae. Traditionally Type Ia supernovae are thought to be formed when a white dwarf accretes mass from a red giant, exploding when it reaches the Chandrasekhar limit. However, US 708 is a compact sub-dwarf O-type star, which is similar to the Helium core of a red giant that has been unearthed from the puffy outer Hydrogen layers. Thus, US 708 would have donated Helium onto its white dwarf companion, which can detonate the white dwarf well below the Chandrasekhar limit. This type of detonation may be one of the explanations for the recently observed Type Iax supernovae.

If US 708 was ejected from the galaxy by a Type Ia supernova, a closer study of its composition could help to unlock the origins of these cosmic explosions which cosmologists rely on as standard candles. The nearby supernova may have polluted the surface of US 708 with heavier elements, warranting a closer spectroscopic study. Soon, missions like Gaia are expected to greatly expand the number of hypervelocity stars known, perhaps uncovering more like US 708 that have been ejected from the galactic disk. Until then, look for US 708 at a theater near you this summer; this star was walking away from explosions 14 million years before it was cool.