Title: A Spectroscopic Orbit for the Late-Type Be Star Beta CMi

What happens if a star spins so fast it throws off its own atmosphere? 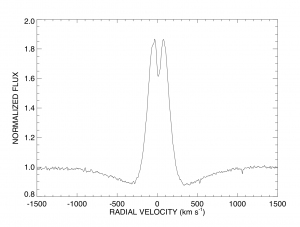 Figure 1: A hydrogen emission line from Beta CMi. The two peaks are caused by blue-shifting (for the left peak) and red-shifting (for the right peak) of light from material at either end of the disc, as it moves respectively towards or away from us. This is Figure 1 from today’s paper.

We believe this is what we see in a class of stars called Be stars. Be stars are stars of spectral class B whose spectra also show emission lines, often double-peaked (see, for instance, the data from today’s paper in Figure 1). This shape of emission line can be matched by a model in which the star is surrounded by a disc of material, with the emission coming from the disc rather than the star itself. One side of the disc is moving towards us relative to the star, and its emission is therefore Doppler shifted towards the blue end of the spectrum (‘blue-shifted’). The other side is moving away from us relative to the star, causing its light to be red-shifted. The result is that see two peaks with different wavelengths, each peak corresponding to one side of the disc.

Another thing Be stars have in common is that they all have high rotation velocities — high enough that the centrifugal force at their equators would push material outwards harder than their own gravity pulls it inwards. That’s what is believed to form the discs we see: matter from the star itself being thrown off by their rotation speed. Such a disc is known as a ‘decretion disc’ (as opposed to the more commonly found ‘accretion discs‘ of material falling onto the star).

We don’t fully understand why these stars spin as fast as they do, but one common suggestion is an analogue to the ‘spin-up’ process that creates fast-rotating pulsars. This process involves the most massive star in a binary (the ‘primary star’) pulling matter from its less massive companion. As the matter falls onto the primary, it transfers angular momentum to the star and forces it to spin faster. By this process, accretion onto the Be star at some point in its history could explain its present-day high rotation speed. It is therefore interesting to look for binary companions to Be stars in order to test this theory.

Figure 2: The measured radial velocities of Beta CMi, wrapped around on the measured orbital period. The left panel shows all measurements, while the right shows measurements averaged into bins. The large amount of scatter on the left panel is believed to be due to turbulence in the disc. This is Figure 2 from today’s paper.

The authors of today’s paper therefore looked at Beta Canis Minoris (Beta CMi), a well-known Be star, to see if they could find evidence of a companion star. Because of its past mass transfer, the companion would be expected to be very low mass and hence difficult to find. However, there were some promising signs. The decretion disc in Beta CMi is smaller than predicted from models, possibly a sign that its outer reaches have been disrupted and broken up by the gravity of the companion.

Today’s authors looked for changes in the radial velocity of Beta CMi due to this proposed unseen companion — the same technique often used to search for planets. If a companion is present, its gravity causes the primary star to wobble backwards and forwards on its axis, creating periodic changes in the velocity of the star. Though small, these changes can be measured by Doppler shift. In Beta CMi the process was complicated by other velocity changes measured by the team (notice how much scatter there is in the left panel of Figure 2). The team believe this scatter came from turbulence in the disc that they were unable to separate from the velocity of the star itself. However, by averaging out this scatter (Figure 2, right panel), they found that the spectral lines of the star did seem to shift back and forth with a period of around 170 days. This points strongly towards the presence of a companion, as predicted, which lends weight towards the favoured model of Be star formation.

The Companion’s Pull on the Disc

Figure 3: The height ratio between the blue-shifted and red-shifted peaks of Beta CMi. The left panel shows individual measurements, and the right panel shows these averaged into bins. The sine wave shown here was fixed to match the measured orbital period, but its amplitude and phase were allowed to vary. This is Figure 3 from today’s paper.

In such a binary system, it might be expected that the companion’s gravity will affect the disc’s structure. The material could be pulled around so that it becomes denser in certain regions and sparser in others.  To search for this, the team looked at the heights of the two peaks in their double-peaked spectral lines. Their prediction was that as an over-dense region moved towards us, the blue-shifted peak would be slightly higher, and as it moved away, the red-shifted peak would be higher instead. Figure 3 shows how the ratio of these heights changed over time, folded at the orbital period they measured previously, along with a sinusoidal fit. Again there is a lot of scatter, but the results seem to fit with the predictions! The peak of the best-fit sinusoid shown here lags slightly behind the peak radial velocity of the star itself (by around 3% of a full orbit), implying that the over-dense region is being pulled around slightly behind the companion.

The evidence is good that Beta CMi has a companion star. It joins several other Be stars that do. It also falls in line with the theory that transferring material from a companion is an important path by which these stars can form. The detection of structure in the disc due to the companion is also exciting, and new observations looking for more like this will be interesting to see. Stay tuned!