Despite being located in the asteroid belt, the dwarf planet Ceres is more like a low density version of Earth than its asteroid neighbours. This lower density has led scientists to believe that it contains a large fraction of water ice, like the icy moons in the outer solar system. Following the discovery of water vapour from Ceres by the Herschel telescope and the probable detection of exposed surface water ice by NASA’s Dawn spacecraft, the authors of today’s paper searched for water in the permanent shadows of the many craters in Ceres’ northern hemisphere.

While we have seasons on Earth due to its obliquity, or tilt, of 23.5 degrees, Ceres’ obliquity of only 4 degrees gives it more constant sunlight throughout the year. As a result, parts of craters near the poles are more likely to be permanently shaded. The authors identified these shaded regions using the images taken by the Dawn spacecraft nearest to the northern summer solstice, where the Sun reaches its highest position in the sky and shadows are at their smallest. They spotted 634 of these ‘permanent shadowed regions’ (where the Sun never crosses the horizon of the crater), covering ~1% of the surface north of 65 degrees, see Figure 1. These regions were identified from the images as pixels below a threshold flux value, which varied between craters to account for differences in surface reflectiveness (albedo), crater shape, and the colour of the filter used to observe. 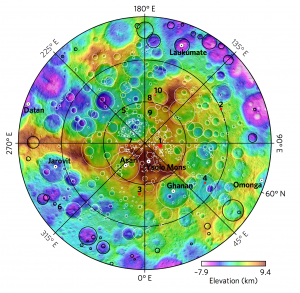 Figure 1: Average map of Ceres centred at the north pole and extending to 60 degrees north. Craters with permanent shadows are shown by white circles. Red filled circles represent the 10 craters identified with bright deposits, with circle size scaling to crater area. From Figure 2 of today’s paper.

These permanent shadowed regions are much cooler than their surroundings as there is no direct sunlight or atmosphere to recirculate heat. Water could then be ‘cold trapped’ within them, which also happens in craters on the Moon and Mercury. In a cold trap, a metre squared crater would lose less than one kilogram of ice in a billion years, but only if temperatures are below 110 K (or -157 degrees Celsius). The authors estimated the maximum temperature at the summer solstice by modelling thermal emission from surrounding areas and sunlight scattered by nearby illuminated regions. Their test cases gave temperatures down to 57 K, much lower than the 110 K threshold to trap water.

Having confirmed the permanent shadowed regions could act as cold traps, the authors searched for bright deposits within them. These deposits could be due to water ice, which is more reflective than Ceres’ dark surface. Within these permanent shadowed regions, just 10 bright deposits were identified. To investigate further, the authors looked in more detail at one of the brightest craters: Crater 2. This crater had a bright region extending beyond the shadowed region with an albedo of 0.10-0.16, brighter than Ceres’ average of 0.09, as seen in Figure 2. To confirm that there is ice in the bright region of this crater, they used Dawn’s infrared spectroscopy instrument to observe the chemical signatures in multi-wavelength light. The authors identified several absorption features related to water ice from this bright region (indicated in Figure 3). 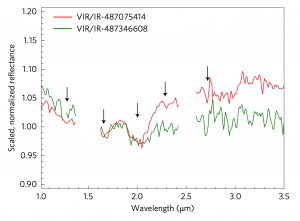 Figure 3: Infrared spectra of the bright region in Crater 2 show water absorption features at 1.28 μm, 1.65 μm and 2.0 μm (indicated by black arrows). Red and green represent two different data sets of stacked images. Spectra are normalised with respect to the average spectrum of Ceres, which has no absorption bands over these wavelengths. Similar absorption features have been identified for the Oxo crater’s water ice containing regions. From Figure 4 of today’s paper.

Where this water ice came from has yet to be answered. We know that Ceres has an icy layer below its dusty crust, which the authors’ model shows can be ejected into the shadowed regions by distant impacts. Alternatively, the water ice could be deposited from space by meteorites. For the 624 permanent shadowed regions without bright regions, some could contain water ice covered by dust from impacts. Time is short for NASA’s Dawn Spacecraft, as it is predicted to run out of fuel in 2018, but in the meantime its continued observations of Ceres should help increase our understanding of this alien world.