Probing the Surroundings of Tycho’s Supernova 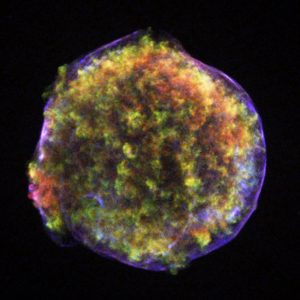 Figure 1: X-ray image of the remnant of SN 1572, false-coloured so that higher-energy x-rays are bluer. Source: NASA/CXC/Rutgers/J.Warren & J.Hughes et al.

In the last 2000 years, only 8 supernovae have occurred within our galaxy that were bright enough to be recorded by humans. Among these is SN 1572, which was seen in the year 1572. It was observed around the world, but is perhaps most famously associated with the Danish astronomer Tycho Brahe, who wrote a small book about it titled De Nova Stella. As an aside, the title of that book is where the modern-day terms ‘nova’ and hence ‘supernova’ come from. The appearance of a new star in the sky helped to challenge the old Aristotelian understanding that the heavens were unchanging. Even today, there is a lot that we can learn from this supernova.

At the site where SN 1572 occurred, we see today a supernova remnant — a cloud of gas that was thrown off by the supernova (see Figure 1). In fact, the gas shell is still visibly expanding, as you can see in this video. By studying light emitted by the supernova and reflected from surrounding material, researchers in 2008 were able to tell that SN 1572 was a type Ia supernova. Supernovae of this type are used to measure the distances to far-away galaxies, because of their unique feature that each explosion has almost the same luminosity. We know that Type Ia supernovae are caused by exploding white dwarfs, but we don’t fully understand what triggers the explosion. There are two important models: either the white dwarf collides with another white dwarf, or it grows in mass by pulling in material from a companion star.

In the second of those two models, the companion star should survive the explosion and be flung away at a relatively high speed. Apart from having a high velocity, it would look just like a normal star near the supernova remnant. Therefore, by looking for a star near the supernova remnant that might be a surviving companion, researchers can hope to tell which of the two models triggered the explosion in SN 1572. 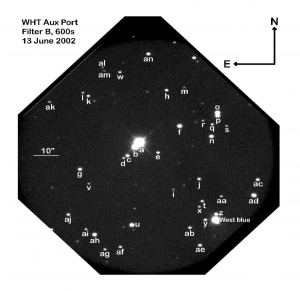 Figure 2: All of the stars studied for today’s paper, lettered according to how far away they are from the SN 1572 remnant. The remnant is at the centre of the image. Source: Figure 1 in today’s paper.

The team behind today’s paper set out to do just this using data from Gaia. Regular readers will no doubt have heard of Gaia by now, but a brief refresher: Gaia is a satellite that measures the positions of stars, the movements of stars due to their own innate velocity (the “proper motion” of a star), and the apparent movements of the stars created by the Earth’s movement around the sun (the “parallax” of a star, which effectively tells you the distance of the star from the Earth). Combining these gives you information on each star’s position in 3D, and its velocity in 2D — the third component, its radial velocity (towards and away from the Earth), can be found from spectroscopy.

Figure 3: The distance of each of the stars studied from Earth (x-axis) and the proper motion of each star (y-axis). Vertical lines show the range of distances estimated for the SN 1572 remnant. Stars where the distance is consistent with the SN 1572 remnant are shown in blue, while those that disagree are shown in black dashes or dots. Source: Figure 2 in today’s paper.

Considering these various criteria, the authors selected star G (see the labels in Figure 2) as the best candidate for being an ejected companion. This agrees with most of the previous studies, and with the Gaia data is now more certain. Star G is quite close to the supernova remnant, is moving away, and is moving at a higher speed than most of the stars in the area. It is moving at a speed which is quite unusual given its young age, as young stars tend to belong to the slower-moving ‘thin disk’ of the galaxy. In most ways star G looks much like any star, which is generally what we’d expect, so we can’t say for sure whether it is an ejected companion or just an innocent passer-by of a star.

The authors also consider another possibility for an ejected companion: what if the companion that was ejected was another white dwarf? A theory called D6 (dynamically driven double-degenerate double-detonation) predicts that this should be possible, and white dwarfs that look like they’ve been ejected have already been found. Ejected white dwarfs can end up moving a lot faster, because their lower masses mean they get a bigger kick from the supernova. Today’s authors performed a search for high-speed white dwarfs in the area around the supernova remnant. They found none. The result is not necessarily conclusive, given that such a white dwarf would be faint and there’s still a chance that Gaia would have missed it.

Overall, it seems that star G is more likely than any other star to have been the companion to SN 1572. Whether it truly was the companion remains to be seen, however — if it was not, then it becomes likely that SN 1572 formed by the collision of two white dwarfs which were completely obliterated, leaving no star to be ejected. Further study of star G will hopefully be able to tell us for sure, giving us an exciting new piece of information on how type Ia supernovae work. Even a 450-year-old supernova still has something to tell us!