Title: Multiple Disk Gaps and Rings Generated by a Single Super-Earth: II. Spacings, Depths, and Number of Gaps, with Application to Real Systems

It’s a little too late for anyone to witness how Earth, and its planetary neighbors, came to be – at least, not without some sort of time machine.  That’s one reason scientists study protoplanetary disks out in space: to learn more about how planets form.

A protoplanetary disk is a fluffy disk of dust and gas orbiting around a young star.  These disks are believed to be sites of planet formation.  The Solar System we live in was once a protoplanetary disk, waaay back in the day before its planets formed.

In the past, it’s been extremely difficult to directly catch disks in the act of forming planets.  But powerful new instruments of this (and the next) decade are helping to change that.  With the awesome might of one such instrument, known as the Atacama Large Millimeter/submillimeter Array (ALMA) in Chile, scientists have very recently been able to observe protoplanetary disks at higher resolution than ever before.  Their observations show all sorts of substructures in disks, like holes, spirals, and gaps.  Figure 1 gives a taste of these intricate substructures in a handful of disks, which were all observed with ALMA a few years ago. 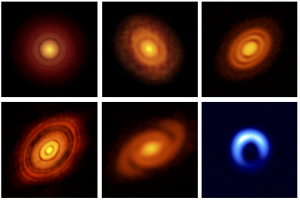 Figure 1: Amazing high-resolution images of six different protoplanetary disks observed with ALMA.  These images were compiled from studies published back in 2015 and 2016.  Image compilation taken from https://almascience.nrao.edu/alma-science/planet-forming-disks.  Credits: S. Andrews, L. Cieza, A. Isella, A. Kataoka, B. Saxton (NRAO/AUI/NSF), and ALMA (ESO/NAOJ/NRAO).

It’s still not clear what exactly is causing these substructures in protoplanetary disks.  But one really, really exciting prospect is that they’re caused by planet formation.

Reading this, you might take a second look at the gaps observed in Figure 1… and then quickly get overwhelmed, trying to imagine a planet within every single gap.  But a group of researchers recently found that it’s possible for a single planet to clear out multiple gaps.  Through protoplanetary disk simulations, they found that a single super-Earth-like planet, with a mass between those of Earth and Neptune, could lead to up to five dust gaps in a disk – all of which could be seen by ALMA.  So orbiting planets might have caused groups of the gaps that we see in Figure 1.

Today’s authors set out to more fully explore the relationship between a growing planet and the gaps that it can form.  Using simulations of disks with evolving planets, they studied how gap characteristics vary with disk and planet parameters.  They also determined how scientists can use these gap characteristics to infer properties of planets from observed disk substructures – assuming that those observed substructures were caused by planets to begin with!

Today’s authors performed two-dimensional simulations of both the gas and the dust in a protoplanetary disk.  In each simulation, the authors placed a single planet at a fixed orbital radius.  They then ran the simulation, letting the planet orbit and grow for about 0.1 to 1 million years.  They kept track of the gaps that formed due to the planet over time, through the gaps’ widths, depths, and radial locations.

They varied the planet masses (Mp) and disk height vs. disk radius ratios (h/r) across their simulations.  Figure 2 shows an example simulation run, where Mp = 1.8 Earth masses and h/r = 0.03 (meaning that the total height of the disk at a given disk radius is always 3% of that disk radius).  We can see that the planet produced many gaps in both the disk’s gas and dust over time, but that the dust gaps are much larger in magnitude than those in the gas. 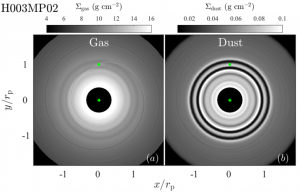 Figure 2: A snapshot of one disk simulation, giving a bird’s-eye-view of the disk after 0.26 million years.  The left and right plots show the gas surface density and the dust surface density of the disk, respectively.  The green plus marks the star’s location, which is masked out with a large black circle.  The green dot marks the planet’s location.  We can see gaps carved out by the planet in the dust, and much fainter gaps carved out in the gas.    From Figure 1 in the paper.

The authors analyzed how variations in Mp and h/r affect characteristics of the gaps.  They found a number of interesting trends from their results, including:

The authors also found that, among the three gap characteristics that they explored – width, depth, and location – gap location is the easiest and most robust characteristic for comparing simulations to observations.  Of the three, gap location changes the least with time in their simulation runs.  And for particularly narrow gaps that aren’t resolved well in observations or models, gap locations can still be more accurately determined than gap width or depth. 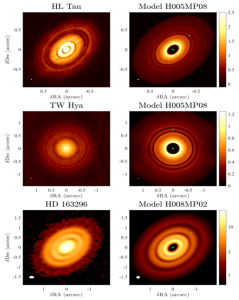 Figure 3: Comparisons between real disk observations on the left and the authors’ best-matching models on the right.  In each of the models, the green plus marks the star’s location, which is masked out with a black circle, while the green dot marks the planet’s location.  Each row corresponds to a different disk.  Read from top to bottom, the disks are named HL Tau, TW Hya, and HD 163296, and the modeled planets have masses of 57, 29, and 65 Earth masses.  We can see that some (though not all) of the gaps in the models match the gaps in the observations.  Figure 9 in the paper.

With gap location as their major tool of analysis, the authors went on to compare their simulation results to three real protoplanetary disks, known as HL Tau, TW Hya, and HD 163296.

The authors emphasized that their models were not tailored or fitted to the unique structures of these disks.  Instead, the authors used the best-matching simulations from the grid of Mp and h/r values that they’d already explored.  More work would need to be done to specifically simulate each disk.

Figure 3 compares the three real protoplanetary disks to the authors’ best-matching models.  They found that in each case, a simulated planet of sub-Saturn mass could produce gaps that roughly match the gaps we observe in these disks.

For the future, the authors point to observational microlensing surveys, as a way to learn about the planets possibly forming within protoplanetary disk gaps.  With the help of their simulations, those surveys may have a better idea of where to look first.