Putting together a planet 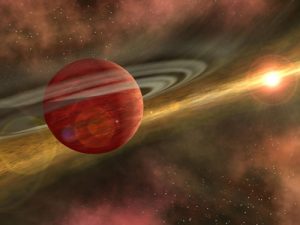 Figure 1: An artist’s impression of a planet, orbiting within a cleared space inside of a protoplanetary disk.  Image Credit: R Hurt (SSC) / JPL-Caltech / NASA.

One of the great questions of astronomy today is also a deceptively simple one:

How do planets form?

It’s an old question, to say the least.  But even in modern times, scientists continue to search for the answer.

One popular theory for how planets form – although there are other theories, like those described here and also here – is known as the core accretion model.  This model says that a planet is born through the following two steps:

The core accretion model is meant to explain, for example, how gas giants like Jupiter form in protoplanetary disks.  A protoplanetary disk is a disk of gas and dust orbiting about a young star.  For the core accretion model to work, a core must form before the gas in the disk can disperse with disk age.  Otherwise, there wouldn’t be any gas left for the core to accrete a gas envelope in the first place.

While the core accretion model has evolved a lot over the years, today’s authors focus on one scenario, which says planet cores grow through the accretion of pebbles.  In this case, pebbles are bits of dust that are about a centimeter in size (or about half the length of a penny).  These pebbles orbit along with the protoplanetary disk around the central star.  But because of pressure in the disk, the gas in the disk is actually orbiting at a slower speed than the dust in the disk.  So the poor pebbles, due to their small sizes, feel something like a headwind from the disk gas, which pushes back against their movement.  These pebbles thus feel a drag force from the gas, which allows a growing core to accrete the pebbles more easily.  And that’s good, because we want the core to grow massive quickly enough, so that it can accrete a gas envelope before the gas in the disk disperses.

Today’s authors set out to explore this pebble-based core accretion scenario more fully.  Using theoretical modeling, they investigated what sort of planets this scenario could produce.

Using a plethora of theory and equations, the authors built a model of a time-dependent protoplanetary disk.  Their model was very thorough.  For example, they considered how pebbles in the disk would drift inwards towards the central star with time, due to the headwind we discussed earlier.  They accounted for how this process, known as radial drift, would affect the disk’s overall surface density and planet growth.

Let’s take a look at a couple of the tests that the authors investigated with their model.

One such test was to see how the proportion of total dust in the disk stored in pebbles – rather than just left as dust that didn’t form pebbles – affected planet formation in the disk.  For this test, they placed a certain proportion of pebbles into the modeled disk, and then let the pebbles and overall disk evolve forward in time. 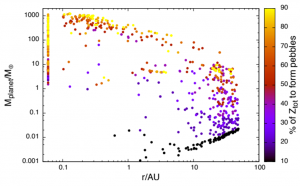 Figure 2: A plot showing planets formed from the model.  The y-axis gives the mass of the planet, in units of Earth masses.  The x-axis gives the distance from the central star, in astronomical units (AU), where 1 AU is the distance from the Earth to the Sun.  The colors indicate the percentage of total dust in the disk (labeled as Ztot) that was used to make pebbles.  The points bunched up at the inner edge of the modeled disk, at around 0.06 AU, migrated so far inward that they would likely fall into the central star.  Figure 4 in the paper.

Figure 2 shows the results of this particular test.  The authors found that the most massive planets formed when about 80%-90% of the total dust in the disk was stored in pebbles.  However, some of those massive planets migrated so far inwards that they would likely fall into the central star.

The authors also investigated in detail how the growing gas envelope of a core could affect planet growth.  When a growing core reaches a certain mass, its growing gas envelope contracts.  This contraction produces some luminosity, which can affect how the core continues to accrete gas for its envelope.

From these and other tests, the authors concluded that in general, larger proportions of pebbles lead to the formation of more massive planets.  However, they noted that there has to be a balance between the pebbles and surrounding dust; too little dust in the disk, and the planets would migrate so far inward that they would fall into the central star.  The authors also emphasized the need to take into account envelope contraction in these calculations.  Including envelope contraction in their model definitely affected their results, and helped them better reproduce observations.

The authors left even further investigations, such as how multiple planets growing in the same disk might affect each others’ growth, for future work.  But already their work in today’s astrobite updates our outlook on planet formation, and it brings us that much closer to understanding how planets – like Earth, our Solar System neighbors, and all of the exoplanets so far discovered – came to be.