The new Large Synoptic Survey Telescope (LSST) will be able to survey millions of binary star systems when it becomes operational in 2020. With this state-of-the-art telescope comes a new ‘y’ filter, in addition to the ‘ugriz’ filters used in earlier telescopes. Filters are important for telescopes because they allow only certain wavelengths of light to pass through. These specific wavelengths allow us to study different characteristics of a star. 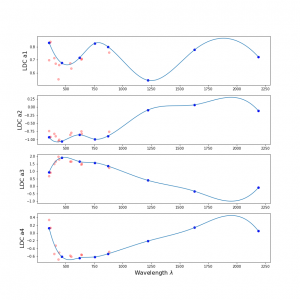 This figure shows the SDSS/2MASS filters (blue) and other filter systems’ (red) limb-darkening coefficients as a function of wavelength. The fit function is a spline we are using to find the value for the y-band (~920-1040nm).

We will use these coefficients to simulate LSST observations more accurately. Eventually we will try to find the optimal cadence for LSST to detect and identify eclipsing binary stars.

If you are an undergraduate that took part in an REU this summer and would like to share your research on Astrobites, please contact us at submissions@astrobites.org!