Title: The gravitational redshift of Sirius B

White dwarfs are fascinating stellar remnants left over at the end of the lifetimes of many stars. Only about the size of Earth, these tiny objects can potentially be more massive than the Sun. And unlike many of the exotic objects we study in astronomy we have one situated right next door to us! Located a mere 8.6 light-years away, Sirius (the brightest star in the night sky), is actually a binary system. Sirius A, the one we see, is a main sequence A-type star, while its invisible companion Sirius B is a white dwarf. (Sirius B is also affectionately called “the Pup” due to Sirius A being known historically as the “Dog Star.”)

Sirius B was discovered on January 31, 1862, and was recognized as a white dwarf in 1915, only the second one to be discovered (after 40 Eridani B, as related in this astrobite). A year later in 1916 Einstein published his theory of General Relativity, with one of its predictions being that light leaving a star should be affected by gravitational redshift. (This is where light climbing out of a gravitational well loses energy and appears redder.) In 1924 the astronomer Arthur Eddington realized that, since Sirius B was so small and dense, it should show a measurable gravitational redshift. This was measured for the first time in 1925 by Walter Adams at the Mt. Wilson Observatory and considered a big success for General Relativity. (Although we now know that both the predicted and measured shift were about four times too low; it’s speculated that the spectra of Sirius B may have been contaminated by light from Sirius A which is very nearby on the sky.)

By measuring the gravitational redshift of a star with a known radius we can also measure its mass, since for a typical stellar object (i.e., not a neutron star or black hole) the gravitational redshift depends only on those two quantities. We can measure the distance to Sirius B using its parallax very well since it’s so nearby, and by measuring its luminosity (based on its brightness and temperature) we can work out its radius. We can also measure its mass dynamically, by observing how it and Sirius A orbit around their common center of mass and applying Kepler’s laws of orbital motion, but there’s a small problem: estimates of Sirius B’s mass based on measurements of its gravitational redshift have historically differed from its dynamically-measured mass by about 10% (to be clear, this is from new measurements taken after the original ones were realized to be wrong).

To clear up this long-standing confusion, the authors of today’s paper used the Hubble Space Telescope to take spectra of both Sirius A and B in order to perform a differential measurement of the gravitational redshifts of both. Differential measurement is a useful tool as it helps eliminate a lot of systematic errors that might be present in an instrument, since any that exist will affect all observations equally. The gravitational redshift of Sirius A is better known than for Sirius B, so by measuring both, finding the difference between them, and correcting for the known value of Sirius A’s redshift it’s possible to make a more precise and accurate measurement of the gravitational redshift of Sirius B than would be possible by observing it alone.

Gravitational redshift, even for a white dwarf like Sirius B, isn’t a very large effect. In earlier work the gravitational redshift for Sirius B was estimated to be 83 ± 3 km/s. At the wavelength of hydrogen alpha (Hα) which the authors used to measure the redshift, this corresponds to a shift in wavelength of just 1.81 ångströms (Å, 1×10−10 m) . Figure 1 shows the four spectra of Sirius B acquired by the HST, showing just how small such a shift is. 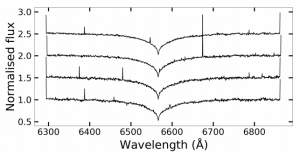 Figure 1: The four spectra of Sirius B taken by the Hubble Space Telescope for this paper, centered on the hydrogen alpha (Hα) line which the authors used to measure the redshift. The spectra have all been continuum-normalized and are shown offset by 0.5 vertically for clarity. Note the scale in Å on the horizontal axis. Figure 2 in the paper. 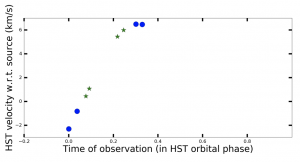 Figure 2: The velocity of the Hubble Space Telescope with respect to the Sirius binary system center of mass as a function of time over the time period when the observations used in today’s paper were taken. Blue circles are spectra of Sirius B, green stars of Sirius A. Figure 5 in the paper.

Measuring the redshift of Sirius B required a lot of velocity bookkeeping for the authors: they had to account for the velocity of the HST around Earth (as shown in Figure 2), the velocity of Earth around the Solar System’s center of mass, and the velocities of Sirius A and B around their common center of mass. After correcting for all this they were able to get a measurement of the difference in redshift between Sirius A and B. By correcting for the (previously-calculated) value of the gravitational redshift of Sirius A of 0.759 km/s and comparing it with the differential redshift they found for Sirius B, the authors were able to get an absolute value of the gravitational redshift for Sirius B of 80.65 ± 0.77 km/s.

This measured redshift was then used to compute the mass of Sirius B using a simple model. The value of 1.017 ± 0.025 solar masses from this calculation matches the value obtained by dynamical methods—1.018 ± 0.011 solar masses—almost exactly. And by combining the mass of Sirius B with its radius the authors were able to show that it fits nicely with our models of something called the mass-radius relation for white dwarfs, as shown in Figure 3.

Figure 3: This shows where Sirius B sits on the mass-radius relation for white dwarfs. The different colors are for different temperatures; the green line is for the temperature that best fits Sirius B, 25,922 K. The solid and dashed lines have to do with whether the white dwarf has a thick or thin layer of hydrogen around its core. Figure 11 in the paper.

Measuring white dwarfs’ masses using their redshifts is a useful tool for astronomers because it’s possible to do with just a few spectra, whereas the dynamical method can take years and only works for relatively nearby stars. By performing this differential test with our closest neighboring white dwarf the authors were also able to find and point out some small systematic effects with the Hubble Space Telescope’s spectrograph that will likely be of use to other people performing similar spectroscopy measurements on other white dwarfs that don’t have such convenient nearby reference stars.