If you have been paying attention to space news recently you may have seen stories suggesting that the interstellar object ‘Oumuamua, which passed through our solar system just over a year ago, could have been an extraterrestrial probe. Some headlines are a bit sensational (e.g. Scientists say mysterious ‘Oumuamua’ object could be an alien spacecraft, Mysterious interstellar object floating in space might be alien, say Harvard researchers or An Alien Spacecraft May Have Passed Through Our Solar System Last Year, Claim Scientists) while other articles are a little more doubtful (e.g. Interstellar object may have been alien probe, Harvard paper argues, but experts are skeptical). Today’s paper is the source of these articles and, while the premise is a little less far-fetched than you might think, the conclusion lacks transparency.

Figure 1: Artist’s impression of ‘Oumuamua based on its inferred composition and shape. Credit: ESO/M. Kornmesser

So what is so odd about ‘Oumuamua (other than its odd shape, see Figure 1, and the fact that it came from outside our solar system!)? A paper published earlier this year noted a “non-gravitational acceleration” in the trajectory of ‘Oumuamua as it passed through our solar system. This acceleration, detected at 30σ significance, corresponded to a radial (with respect to the sun) acceleration proportional to r-2. This behavior is actually very common for solar system comets mainly due to outgassing as the comet warms, though other weaker forces such as the Yarkovsky effect can play a role. Outgassing is what causes the beautiful coma and tail usually associated with comets. This feature is notably missing from ‘Oumuamua, leading the authors to suggest that, since outgassing is the most likely source of the acceleration, the composition of ‘Oumuamua must be slightly different than solar system comets. If the dust grain sizes were much larger than normal they would not have been detected.

Since radiation pressure follows a similar r-2 dependance to the acceleration seen in ‘Oumuamua’s path, it could be a simple explanation. The authors of the earlier paper rule out radiation pressure as the source of the extra acceleration, arguing that it would imply an unreasonably low density for the object. Undeterred, the authors of today’s paper investigate what would be required if it were the source. They use some relatively straight forward physics to determine that ‘Oumuamua would have a mass to area ratio of ~0.1 g cm-2. Assuming a typical density of 1–3 g cm-3 the authors determine that the object would have a thickness of ≲1mm. This is extremely thin for an object that has a radius somewhere between 10 and 1000m (given the observed brightness and a range of albedos)! 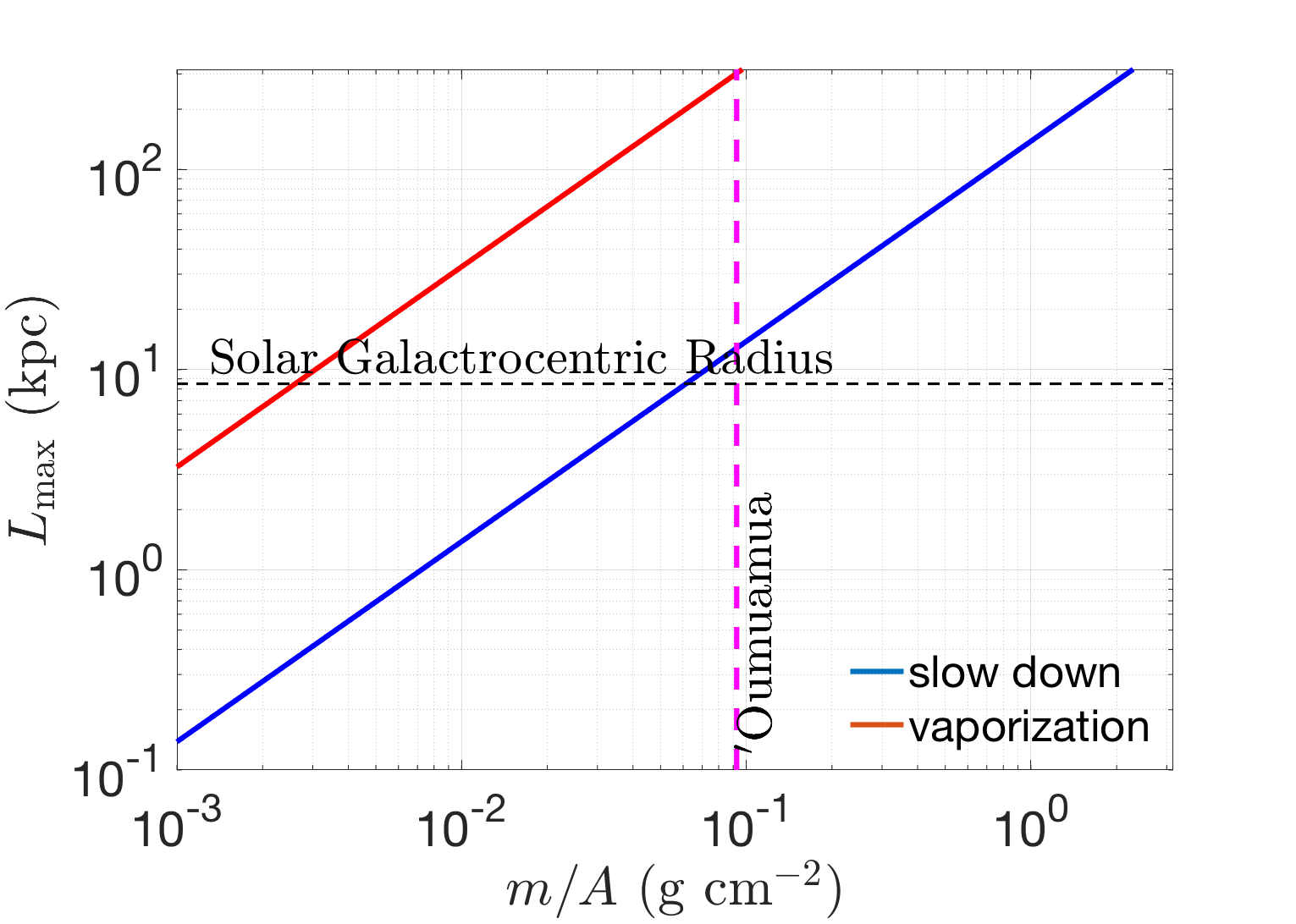 Figure 2: Maximum possible distances traveled, as limited by collisions causing slow down and vaporization, as a function of mass to area ratio. The dashed magenta line shows the m/A constraint based on the observed acceleration. Figure 1 in the paper.

The authors then go on to study how traveling through interstellar space would affect such an object. Given the typical density of the interstellar medium (ISM), it is possible for such an object to travel Galactic distances without slowing down due to momentum transfer or lose a significant fraction of its mass due to vaporization (see Figure 2). (While vaporization is not a significant effect for the relatively slow speed of ‘Oumuamua, ~26 km/s, this is a real concern for the breakthrough starshot project which will be traveling at a significant fraction of the speed of light.) The authors also find that even relatively weak cometary material would be able to hold the thin object together under its own rotation and the tidal forces experienced during perihelion passage.

But how did this thing form? Well, we don’t know of any natural processes which could form such a large and yet extremely thin object. This leads the authors to propose that it could be a lightsail, either floating through space as debris or sent toward our solar system by an advanced civilization. While of course this is possible, it is an extraordinary claim which, as Carl Sagan said, requires extraordinary evidence. Weighing the “extraordinariness” of a comet of slightly different composition than solar system comets (with outgassing causing the acceleration) versus a large and extremely thin object which we have no known formation mechanism other than intelligent construction (with radiation pressure causing the acceleration) I think the choice is obvious. The authors do appropriately stress the need for future observations to find similar objects, since we can no longer observe ‘Oumuamua.

In conclusion, while speculative studies like this are interesting, it is extremely important to emphasize caveats associated with extraordinary claims such as those made in this paper. For example, this paper only mentions outgassing as an impossible source of the acceleration and does not mention the previously proposed solution. It is important to recognize the evidence for and against a particular explanation, and emphasize the difference between a possible explanation (which has no evidence refuting it) and a probable explanation (which has evidence supporting it). Journalists should also be careful not to extrapolate conclusions and distort claims made by the authors, especially when a covering topic of public interest. For example, the words “alien civilization” are mentioned once in the entire paper, yet many news stories focus on this explanation above all others.