Zihao Yang is an undergraduate from the School of Earth and Space Sciences at Peking University (PKU) in China. He is currently a senior and is majoring in space physics with an emphasis on solar and stellar physics. He conducted this undergraduate research project at Peking University under the supervision of Dr. Hui Tian. This work has been published on ApJ (open access on arXiv) and was also presented at the COSPAR 2018 meeting. Zihao’s personal website is https://zihaoyang-96.github.io/.

Solar prominences are filaments of plasma that extend from the surface of the Sun to its outer atmosphere. The ‘barbs’ or ‘legs’ of some of these prominences, which appear to be rotating, are often termed solar tornadoes. It is under debate whether the apparent motion of solar tornadoes is a real rotating motion, or whether it is caused by oscillations or counter-streaming flows.

To address this question, we analyzed results from spectroscopic observations of two solar tornadoes by the Interface Region Imaging Spectrograph (IRIS). We observed each tornado for more than 2.5 hours, and derived Doppler velocities using Mg II and Si IV emission lines. We find coherent and stable redshifts and blueshifts adjacent to each other on either side of the center of the tornado. If one can imagine rotating materials around a cylinder, then on one side the plasma is always moving towards us (blueshift); on the other side the material is moving away from us (redshift). Our results favor the interpretation of these tornadoes as rotating cool plasmas with temperatures of 10^4 K–10^5 K. They also demonstrate that spectroscopic observations can provide key information to disentangle different physical processes in solar prominences. 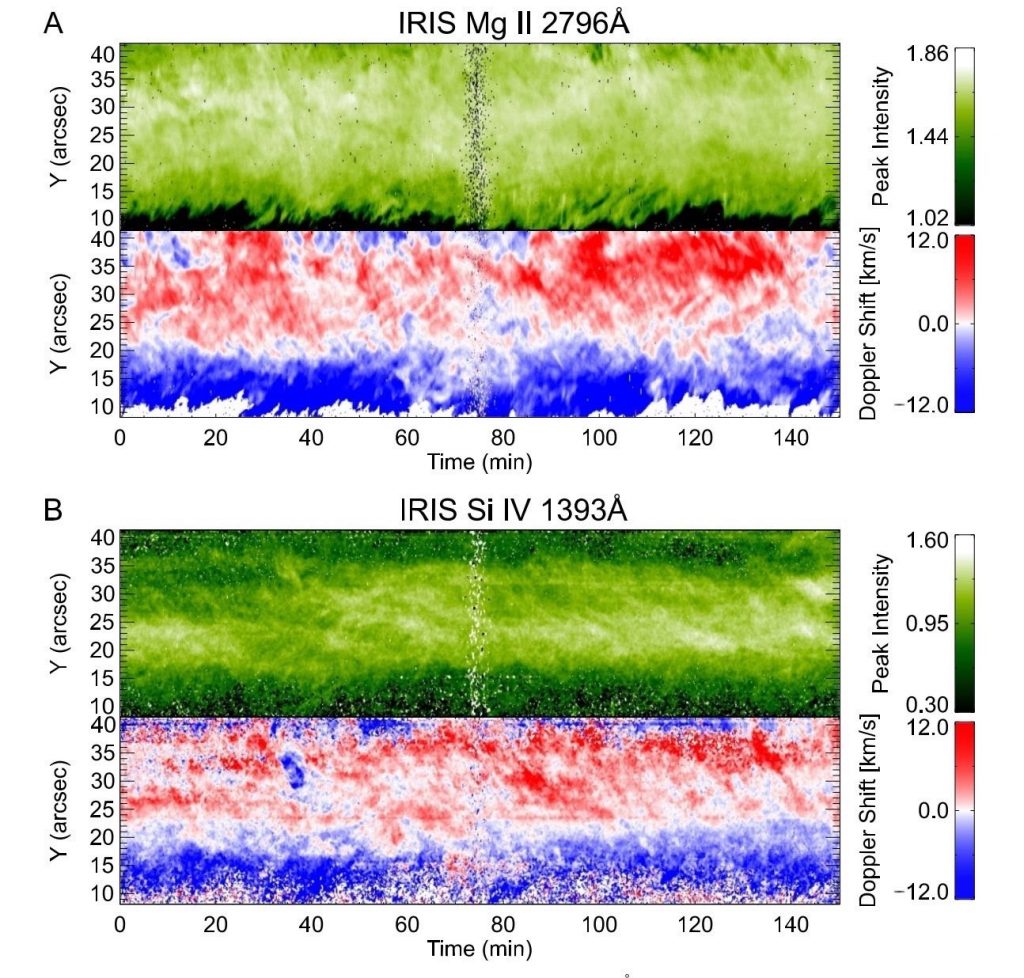 Panel A: Temporal evolution of the peak intensity (top) and the Doppler shift (bottom) of the Mg II line. Panel B: Similar to Panel A but for the Si IV line.
In both panels, a horizontal split can be seen around 20 arcsec on the y-axis with redshift and blueshift on either side. This phenomenon is coherent during the 2.5 hours of the observation, indicating the helical motion of prominence material around a central structure. (Note that the vertical dots around 75 min are caused by energetic particles hitting the telescope on the satellite, and are unrelated to the solar prominence we observed.)

If you are an undergraduate that took part in an REU this summer and would like to share your research on Astrobites, please contact us at [email protected]!