Title: A Candidate Super-Earth Planet Orbiting Near the Snow Line of Barnard’s Star

Sitting at only 6 light years from us, Barnard’s star is the closest single star from us and the second closest M dwarf (Proxima Centauri being the closest). This little 0.16 solar mass star has also been the subject of some serious debate and controversy over the possible existence of a planetary system. In the 1960s, Peter van de Kamp claimed a detection of not one but two planets orbiting at 12 and 20 days, with similar masses to Jupiter. However, multiple groups have been unable to reproduce these results. One study, highlighted in this bite, also ruled out planets with masses greater than 10 Earth masses and periods less than 2 years. If there are planets of smaller masses or on longer orbits, the observations up to this point just haven’t been precise enough to detect them.


But the authors of today’s paper didn’t give up on this tiny star. They observed Barnard’s star every possible night between 2016 and 2017 with CARMENES, HARPS, and HARPS-N instruments. These measurements were then combined with all the other observations of this star over the last 20 years. By using the radial velocity technique, the authors searched for possible “wobbles” in the star’s movement as it is pulled towards and away from us by the undetected planet. And lo and behold, not one, but two signals emerged from the dataset (Figure 1)! One was a repeating or periodic signal at 233 days and another one at >4000 days (or about 11 years). Something (or multiple things) appeared to be playing a gravitational tug-of-war with Barnard’s star. 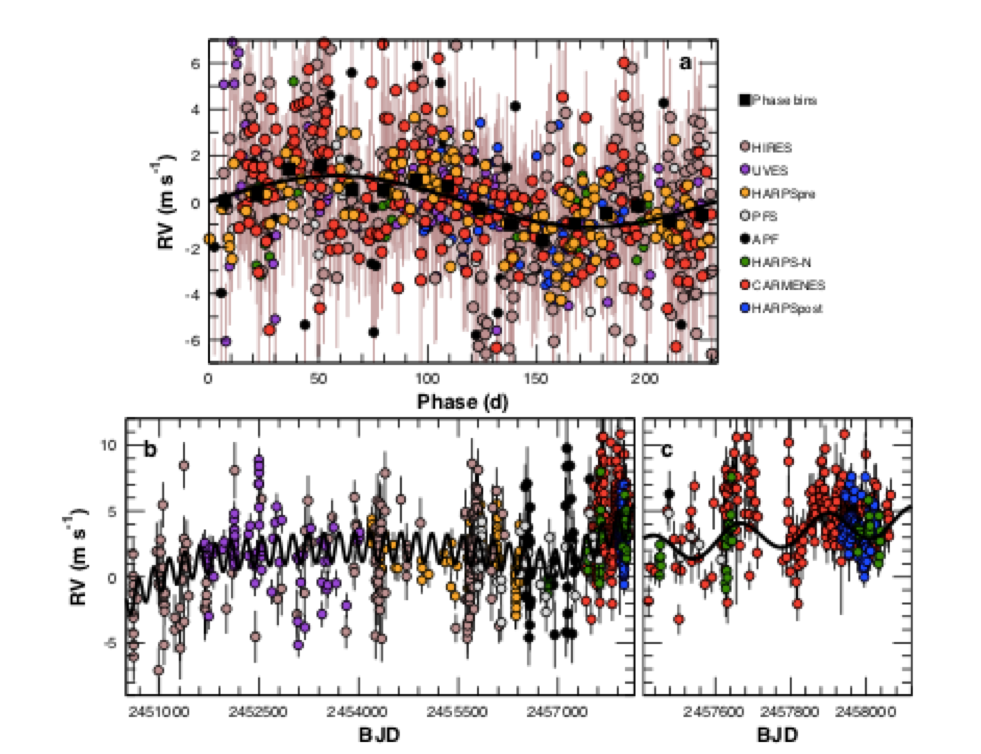 Figure 1: Radial velocity, or how fast the star is moving towards or away from us, versus time in days. Top panel: All the data folded over the 233-day orbital period. Black squares are the data combined into smaller bins and show a clear sinusoidal curve of the star being pulled back and forth. Bottom left panel: All 20 years of Barnard’s star observations with the best-fit model in black. The tiny wiggles are due to the planet candidate at a 233-day orbit. Bottom right panel: Close-up of the recent observations made by the authors of today’s paper. (Figure 3 in today’s paper)

From this gravitational tug, the authors were also able to determine that the object at 233 days must have a mass of more than 3.2 Earth masses and the one at >4000 days would have a mass greater than 15 Earth masses. There are two interesting possibilities from these measurements. One, the 3.2 Earth masses support the previous study which ruled out masses greater than 10 Earth masses in less than 2-year orbits. Two, if the object at 4000+ days is a planet, it might match up with the disputed “planet” found by Peter van de Kamp in 1960, though the masses of the two studies are very different.

Even though the results of their observations appear to point to a super-Earth at 233 days around Barnard’s star, the authors are being cautious by calling this object a planetary candidate instead of a planet (we will get to the other object later). Even with a 99% confidence that this signal appears to be planetary in nature, past results have shown that the 1% can still play a big role. Peter van de Kamp was sure he had detected planets around Barnard’s star even though no other group was able to successfully repeat his analysis. And a few years ago, the signal of a planet around Alpha Centauri B ended up to be due to something as random as when the star was observed. Stellar rotation and variability can also appear as a periodic signal, something the authors of today’s paper do analyze and rule out for the 233-day object.

Still, until an independent group repeats this analysis with similar results, Barnard’s star b will continue to be labeled as a candidate. One promising feature going for this potential planet is that it orbits Barnard’s star near the “snow-line.” The snow-line is the distance from a star where water turns into a solid. It is also at this distance that we expect planets to easily form as they have more material to work with: metals, rock, and now water-ice. So if we were to go looking for a planet around Barnard’s star, the snow-line would be the best place to start.

Which brings us to that 4000+ day signal. 20 years of observations is just not long enough to see if this periodic signal repeats itself. The authors also point out that it might be created by long-term stellar variability. We see these long-term trends in the Sun when it comes to solar maxima and minima. It is very likely that Barnard’s star has something similar, though on what timescales, the authors don’t know. Continued monitoring of this star over the next decade may provide answers to this mystery. Gaia may answer this question sooner than this. A massive planet would cause the star to shift its position ever so slightly in the sky (called astrometry), and this shift at 3 milli-arcseconds would be detectable by the Gaia spacecraft.

The planetary system, or lack thereof, around Barnard’s star demonstrates the incredible difficulty of finding and confirming planets, even around one of our closest neighbors. Because of that reality, we still have a lot to do before we decide to visit this potential frozen world! But time is on our side.