The Properties of Simulated Jellyfish

Title: Jellyfish galaxies with the IllustrisTNG simulations: I. Gas-stripping phenomena in the full cosmological context

When an astronomer glances through a telescope at the night sky, the last thing they expect to see is a sea creature. However, it is difficult to deny that a fairly large number of galaxies bear a remarkable resemblance to that most noble of cnidarians, the jellyfish. These so-called “jellyfish galaxies” have peculiar shapes that visually resemble jellyfish tentacles trailing behind the main body of the galaxy and are often found inside galaxy clusters, acting as a satellite of the cluster’s central galaxy. But although it is known that they appear in clusters, we still don’t know how they take shape. The authors of today’s paper use cosmological simulations to create simulated jellyfish galaxies and learn more about how these intriguing structures are formed. 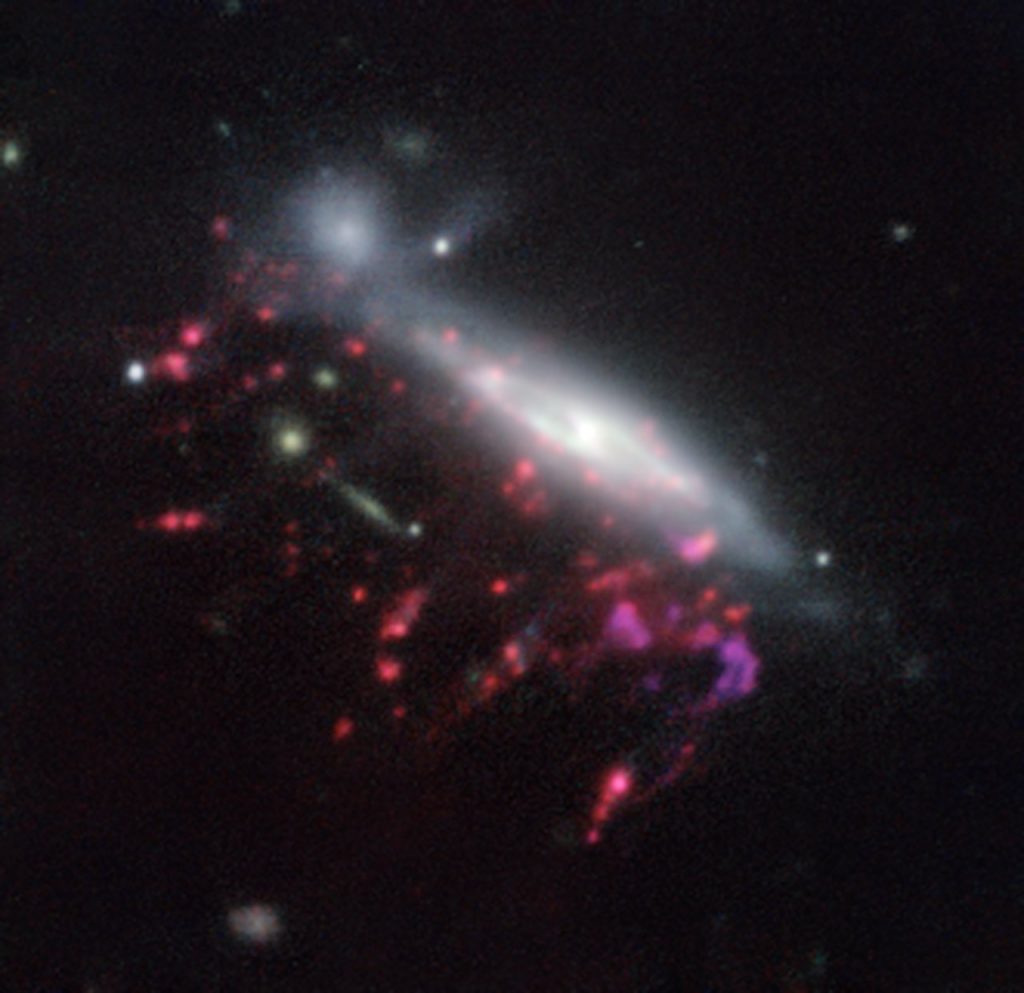 Figure 1: An example of an observed jellyfish galaxy, showing bright pink “tentacles” trailing to the bottom left behind the main body of the galaxy, visible in white. Credit: ESO/GASP collaboration

There are a few plausible ways that jellyfish galaxies could form. The first is a process called ram pressure stripping, a pressure exerted on an object moving through a medium by the particles in said medium. It is believed to play a role in shaping galaxies in clusters, due to the presence of a hot, low density gas called the intracluster medium (ICM) that occupies most of the space within a cluster. A second possible way for jellyfish to form is through tidal (i.e. gravitational) interactions between galaxies. The gravitational force of one galaxy on another could theoretically (and likely does) strip off some material when they get too close, leaving behind trailing streams of gas. The authors also consider how environmental variables, such as the mass of the host cluster and the motion of the satellite galaxy, could affect these mechanisms.

Figure 2: Four satellite galaxies from the simulation, showing the “jellyfish” score in the column header. Only the far left galaxy, identified by all inspectors as a jellyfish, is categorized as such in the analysis. Modified from Figure 2 in the paper.

The first step in this process is to identify and differentiate jellyfish from other satellite galaxies in the simulation. The authors begin by creating 2D images of each satellite, viewed from a random angle (see four examples in Figure 2). They then recruit five ordinary people (dubbed “inspectors”) to examine the galaxies by eye (similar to the Galaxy Zoo) and label each candidate as being either a jellyfish (worth 1 point) or not a jellyfish (worth 0 points). These labels are assigned based on the presence of (1) an asymmetric gas tail that is (2) attached to the main body of the galaxy with (3) no indication of a nearby companion galaxy. Only galaxies that were identified as jellyfish by all five inspectors were included in the final jellyfish sample analysis.

Figure 3: The left panel shows the jellyfish fraction for varying stellar mass bins while the right shows the same value plotted against the mass of the host cluster. The vertical lines indicate the statistically-derived error bars.  Modified from figure 4 in the paper.

By examining the relationship between satellite stellar mass and the jellyfish fraction, the authors find that more massive satellite galaxies are less likely to have jellyfish-like characteristics. Further, when they compare the jellyfish fraction and host cluster mass, they see that satellites in higher mass clusters are more likely to manifest as jellyfish (Figure 3). This would seem to suggest that the lower gravitational potential of smaller satellites has trouble holding onto its gas when faced with forces conspiring to steal it.  Although it may seem natural to attribute this to the greater gravitational force of a large cluster, the authors instead attribute it to the denser ICM present in the cluster environment. But is there any other evidence to back up this assessment?

The authors employ a clever way to test the ram pressure vs. tidal forces question by measuring the direction of the tentacles of each jellyfish, defined as a vector that describes the orientation of the tail in space. They find that the majority of tail vectors are pointing away from the direction the galaxy is moving in the ICM (Figure 4). In other words, if the galaxy moves to the right, the tail points roughly to the left. Conversely, when compared to the direction to the cluster center, the gas tails have a tendency to be pointing in random directions. Both of these comparisons support the idea that it is ram pressure causing the characteristic gas stripping of the jellyfish, since a tidal force would result in the tail being pulled towards a gravitational potential well, such as the cluster center.

So is there any other evidence of a direct relationship between the ram pressure and whether or not a galaxy is a jellyfish? The authors evaluate this by calculating the ram pressure for all of the satellites and graphing the resulting distribution (Figure 5). They find that jellyfish galaxies generally are subjected to a higher average ram pressure when compared to other satellites, further supporting the intuition that the pressure is a key component of whether a satellite will become a jellyfish once it descends into a cluster. 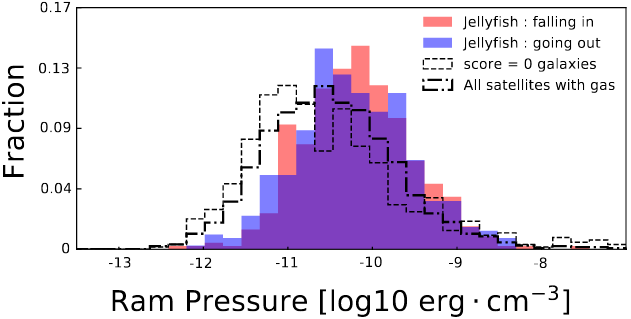 In summary, this investigation finds that jellyfish galaxies (1) likely form due to the high ram pressure they experience in the cluster environment, (2) are accordingly more likely to form inside massive clusters with a dense ICM, and (3) probably form from lower mass satellites. The authors also intend to extend this investigation in the future to examine the physical properties of the gas tails and learn about how the gas loss eventually leads to suppression of star formation within the satellite.

The starry, dusty origin of a galaxy cluster at z = 4!