Linking the laboratory to the stars

If you ever wondered who put the physics in astrophysics, a key figure in American astronomy history is George Ellery Hale. He is the subject of Dr David DeVorkin’s plenary talk at this year’s AAS meeting. 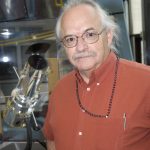 Dr David DeVorkin is the Senior Curator at Smithsonian’s National Air and Space Museum, where his role includes collecting astronomical items of historical interest to exhibit, such as George Willis Ritchey’s mirror grinding machine – which built Hale’s 60-inch telescope, organising exhibitions and writing books, including ‘The Hubble Cosmos’. His plenary talk, titled, ‘Make No Small Plans’, is part of the AAS’s commemoration of 150 years since the birth of George Ellery Hale.

As a child, Dr DeVorkin visited the Griffith Observatory in Los Angeles which hosts a planetarium (as seen in La La Land) where ‘there were exhibits of telescopes that were at Mount Wilson and they had images of George Ellery Hale as the person who built it all’. DeVorkin loved using telescopes and joined the LA astronomical society before studying for a double major in astronomy and physics. He wondered how astronomy had changed from surveying the heavens to using astronomy to answer questions about the universe.

It turns out that this had a lot to do with Hale, a central figure in astronomy in the 20th century. He was a great organiser, focused on getting projects funded and rolling. Some of his many achievements include founding several observatories, including the Mount Wilson Observatory, building the largest telescope four times in a row, inventing the spectroheliograph and playing a key role in the founding of the AAS as it is today.

However when asked what Hale’s greatest impact on astronomy today was, Dr DeVorkin explains that an often forgotten part of Hale’s legacy is centering the work of astronomy on physics: to not just map the brightnesses and motions of stars but ‘his whole theme was linking the laboratory to the stars’ to understand how they work. This is what motivated him to set rolling the development of the 100-inch telescope and to devote it to answering specific astrophysical questions: ‘How does a star form, how does a star age, how does a star die?’. A A Michelson developed the stellar interferometer for the 100-inch telescope to make the first direct measurements of stellar diameters. Measuring Betelguese and other stars proved that Henry Norris Russell’s theory of red supergiant stars was valid. The 100-inch telescope was also used by Edwin Hubble to investigate ‘the spiral nebulae problem’, finding these were other galaxies and that the universe was expanding, leading to the ‘Big Bang’ theory. It was also this philosophy that prompted Hale to found ‘The Astrophysical Journal’ at just 24, and persuade others to put astrophysics centre stage when helping set up the first nationwide astronomy meetings, which became the Astronomical and Astrophysical Society of America (A&ASA), later renamed as the AAS we know today.

Dr DeVorkin’s path later crossed with Hale when he became an observer at Yerkes Observatory (which Hale founded in 1897). He then went back to graduate school receiving an M.Phil in astronomy from Yale in 1970. He started teaching at a state college and while preparing his lectures again asked why is there so much physics in astronomy? This led him to complete a PhD in the history of astronomy remotely. Since then Dr DeVorkin has written a biography on Princeton astronomer Henry Norris Russell. In 1980, he became a curator at the National Air and Space Museum.

Dr DeVorkin’s advice for students is ‘focus on what you are passionate about and be passionate about the things that matter to you’: don’t get too distracted by side tasks that end up taking most of your time if that is not what you are interested in. What could we learn from Hale? Dr DeVorkin says Hale believed it was important to be inclusive and be curious and to look at things in new ways. Hale was also ambitious: for himself but also for larger projects, designed instruments to be multi purpose and did his homework so he could be persuasive and obtain funding. In short, we could learn to ‘make no small plans’.