Depending on how you look at it, the Milky Way is either the easiest or the hardest galaxy to study. It’s easy to study because it’s right here—we can study the Milky Way’s individual stars, unlike more distant galaxies that just look like fuzzy blobs of light. But it’s also incredibly hard to study the Milky Way because we’re inside it—we don’t have a birds-eye view of the entire galaxy, making it difficult to understand the full context of our observations.

Fortunately, the Milky Way has lots of neighbors. One of them, the Andromeda galaxy (M31), is another massive spiral galaxy, and in many ways it’s the perfect laboratory for studying Milky Way-like galaxies. We’re not in M31, but it’s close enough that we can observe individual stars in it; even better, all of its stars are at the same distance, so their relative brightnesses can tell us about their physical properties. We can even go a step further and supplement the observations of individual stars with multi-wavelength data that tell us about the gas and dust in Andromeda. 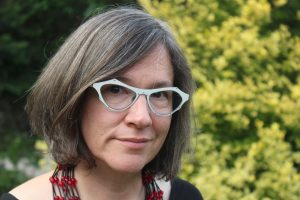 Prof. Julianne Dalcanton from the University of Washington

That’s exactly what Professor Julianne Dalcanton does. Dalcanton, a professor at the University of Washington and the winner of this year’s Beatrice M. Tinsley Prize, works on the Panchromatic Hubble Andromeda Treasury (PHAT). PHAT is a huge archive of data from multi-wavelength imaging and stellar photometry of Andromeda (and its smaller neighbor M33). In Dalcanton’s #AAS233 talk, titled “One Large Galaxy with One Small Telescope,” she’ll discuss PHAT’s scientific legacy.

PHAT is one of the largest projects undertaken with the Hubble Space Telescope. Hubble is great for deep views of objects, but it has a small field of view—and Andromeda takes up a huge area on the sky. So PHAT observations required two weeks of time on the Hubble telescope! As Dalcanton says, “This was a ridiculous amount of time.”

All of that time paid off: PHAT data has been used for a “wide variety of things,” says Dalcanton. “There’s a lot of potential with these data that we’re still trying to figure out how to exploit.” For instance, the multi-wavelength coverage of PHAT has helped produce catalogs of all kinds of interesting astrophysical phenomena in Andromeda, from supergiant stars to planetary nebulae to X-ray sources. One project mapped the largest-ever sample of star clusters in Andromeda, allowing astronomers to study clusters with a wide range of masses in detail (check out this Astrobite describing the project). Recently, Dalcanton has been studying the connection between the stars and the interstellar medium in Andromeda, using the incredible resolution of PHAT to study the time scales over which stars, gas, and dust interact.

Dalcanton hasn’t always studied Andromeda. She started doing astronomy research as an undergraduate, where she tried subfields very different from her current work, like X-ray instrumentation. After she finished undergrad, she worked in industry for a while, which helped her realize that she missed astrophysics and decide to go to graduate school.

Dalcanton’s advice to newer researchers: learn as much as you can outside your subfield! Being open to new questions and ideas is important, and it also helps you learn what your interests are. Dalcanton says that for her, “sometimes the actual work of doing projects is just tedious and horrible… but I’ve always been really interested in the questions.” Some people might prefer other aspects, like building software or teaching; in that case, Dalcanton says, “Don’t hesitate to adjust your path to suit what makes you really happy.”

If you’re interested in hearing more about the questions that Dr. Dalcanton finds interesting, come check out her plenary talk at 8:10AM on Tuesday, January 8 at #AAS233!