U(V) Light Up My Life

Note: The reference to “life” in this post refers to “life as we know it here on Earth.”

M-dwarfs, the smallest and coolest (in temperature and by reputation) of the main sequence stars, are also the most abundant type in our galaxy. As this Astrobite post notes, Earth-sized and super-Earth sized planets are also quite common around these stars, with 0.86 of these types of planets per M-dwarf. Also, as they are cooler, the habitable zone around M-dwarfs is located much closer in. In turn, the shorter period of these habitable zone planet makes it easier to observe multiple transits. Therefore, if we want to search for a habitable planet, then we should be looking for it around an M-dwarf. Several habitable zone planets have already been discovered around M-dwarfs, Trappist-1 has 3 of them!

Unfortunately, just because a planet is in the habitable zone doesn’t necessarily mean that it can support life. These stars also produce a lot of ultraviolet light, especially at the shorter UV wavelengths, called extreme ultraviolet light (EUV). Not only does UV light give you a sunburn, it can wreak havoc on life, from destroying cells to stripping a planet of its water and atmosphere. Most studies agree UV is bad for business, and there is a high probability that M-dwarf planets can’t support life as we know it.

The authors of today’s paper, shine a new light (pun intended) on the effect of UV on life. They note that previous laboratory studies have discovered that UV light is actually necessary to create the building blocks required for life, such as RNA, amino acids, and sugars. The creation of these building blocks is also known as prebiotic photochemistry. Could M-dwarf UV radiation actually be fueling life instead of destroying it?

Early Earth Around a M-dwarf 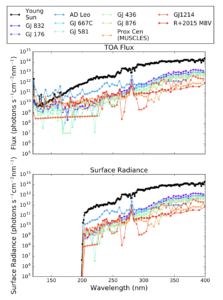 Figure 1: Spectra of multiple types of M-dwarfs and the approximate spectra of the 3.9 billion year old young Sun in black. Top panel is the total amount of flux the stars create at varying wavelengths. At shorter ultraviolet wavelengths, both M-dwarfs and the young Sun radiate a comparable amount of flux. Bottom panel is the amount of light that reaches the surface of the early Earth. The cutoff at 200 nm is due to absorption by carbon dioxide in the atmosphere. A significant amount of UV light from the young Sun reaches the surface compared to any of the other M-dwarfs. (Figure 2 in today’s paper.)

To address this question, the authors first determined what sort of UV environment a pre-life Earth would experience around different types of M-dwarfs. They assumed their planet had a simple 1 bar atmosphere composed of 90% nitrogen and 10% carbon dioxide. This pre-life Earth was then hit with a variety of UV radiation levels based on known M-dwarf spectra. The authors found that the carbon dioxide in the atmosphere protected the surface of the planet from the harmful EUV radiation– a ‘plus’ for life. However, because M-dwarfs are smaller, they only produce 1-10% as much near UV radiation as our young Sun (Figure 1). Using the amount of light that reaches their planet’s surface, known as surface radiance, the authors determined that the reaction rates for prebiotic photochemistry would take 2-4 times longer on a M-dwarf planet than on early Earth.

Can Life Develop or Not?

This doesn’t necessarily mean that life as we know it couldn’t have developed on a M-dwarf planet, just that the pathways to achieving prebiotic chemistry would take substantially longer (on order of

years). If this is the case, then there hasn’t been enough time for life on most M-dwarf planets to develop! However, if the reactions take too long, the paper points out that other chemistry might dominate that which is needed for life, though it is unclear what the timescale for its development would be.

But there may be a way around this. M-dwarfs are fairly active and are known to flare often. The authors repeat their experiment using the spectrum of a known flare from the M-dwarf AD Leo. They find that for a short period of time, the planet experiences UV radiation 10x more than the Earth for some wavelengths, leading to reaction rates which are up to 10x as fast. A comparison of reaction rates before and after a flare is shown in Figure 2. The Relative Dose Rate corresponds to reaction rates. The different colored boxes in Figure 2 represent different chemical reactions. Before a flare, AD Leo, a fairly active M-dwarf, leads to reaction rates which are slower than those corresponding to an early Sun host star. But during a high energy flare, its reaction rates jump orders of magnitude! 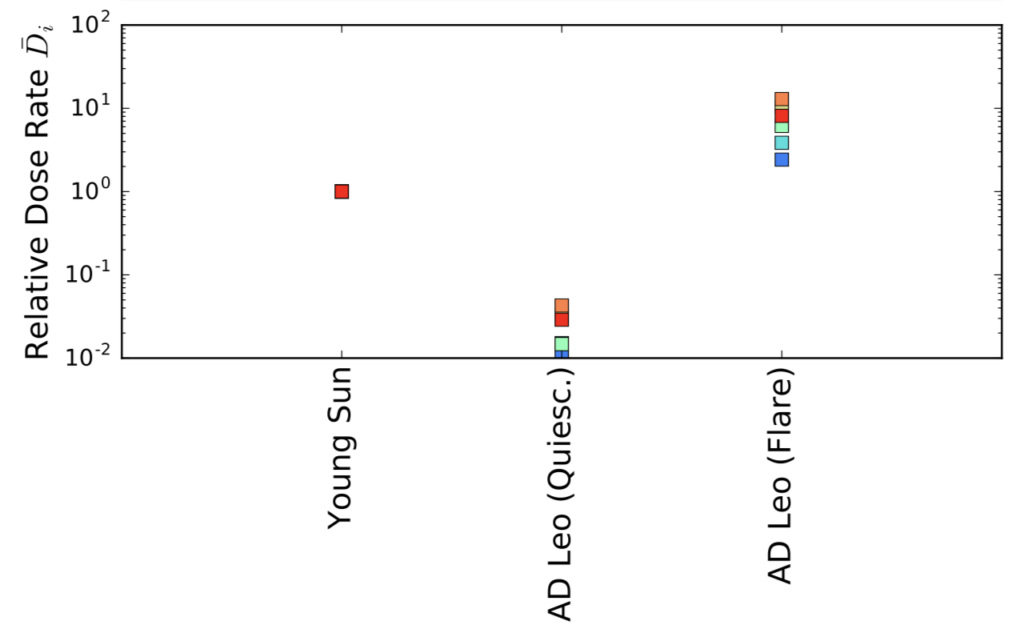 Figure 2: Reaction rates (Relative Dose Rate) of the young Sun, AD Leo when it is not flaring (i.e., it is quiescent), and AD Leo when it does flare. Each colored box represents different prebiotic photochemical reactions. (Modified Figure 6 in today’s paper)

With enough flares hitting the planet, it may be possible for prebiotic photochemistry to occur on similar timescales to that of early Earth.  Though how many flares, how much energy, and what this could do to the atmosphere of the planet, are still questions that need answering both through experiments in the lab and continued M-dwarf observations. The authors argue that we should consider targeting more active or flaring M-dwarfs in our search for life.

As to whether UV radiation is good or bad, we keep coming up with the same answer: “we don’t know.” It turns out we continue to prove a very obvious conclusion: life and the development of life is really complicated.