The center of our 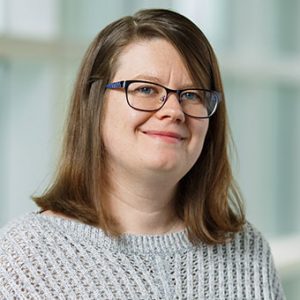 galaxy is home to an incredible number of stars, lots of gas, and a supermassive black hole. This region is far from static – it is hot and turbulent and violent. And since this region can’t be observed at optical, ultraviolet or X-ray wavelengths due to the massive amount of interstellar dust between us and the center, it is also one of the most mysterious. Instead, astronomers must turn primarily to infrared, submillimeter, and radio observations. ALMA has been revolutionary in this area, yielding resolution on scales of thousands of AUs in the center of our galaxy and subparsec scales in galaxies 3-4 megaparsecs away from us. “It’s helping us better understand the center of our own galaxy,” says Elisabeth (Betsy) Mills, a Research Assistant Professor at Brandeis University.

Mills, who is a keynote speaker at AAS234 next month, is at the forefront of these studies, focusing on the physical processes responsible for extreme molecular gas conditions in the Milky Way and other nearby galaxies. She first got interested in the galactic center by doing an exploratory Research Experiences for Undergraduates project. She recalls, “My advisor just sort of threw a dataset at me. It was like, ‘Here’s this image that we made of the galactic center. What can we do with it?’ And that summer ended up with me reading everything I could on the galactic center and getting really excited about it.”

Nowadays, the Central Molecular Zone (CMZ), a roughly 300 parsec wide region in the center of our galaxy, is the focus of most of Mills’ work. Nearly 10 million solar masses of gas are contained in this region, and about 10,000 of those are found in the disk that orbits our supermassive black hole, Sgr A*, at a radius of about 1 parsec. Mills is trying to identify how this gas behaves on scales of hundreds of parsecs down to fractions of a parsec around the black hole. “As gas gets closer to the black hole, even if it’s just orbiting, …you’re going down into this gravitational potential. Because you’re getting closer and closer, you have all of this energy…so the gas gets hotter and hotter. So there’s several ways that we think the black hole can be really messing with its environment,” says Mills.

For example, studies show that stars could have formed long ago at a fraction of a light-year from the black hole. The gas there is much hotter and denser than typical regions of star formation, though, which could mean that star formation proceeds differently in the center of a galaxy than it does in the disk. However, it can be difficult to tell just how rigorous these constraints on star formation are because of uncertainties in the distances to stars and gas in these regions. Determining how far stars and gas are from Sgr A* is challenging since we live in the Milky Way ourselves, as Mills explains: “That means that our view of [the Milky Way] isn’t necessarily edge-on. Right? So it can be very hard to actually get that last piece of data in terms of how distant is a piece of gas from the black hole in the center of our galaxy,” she says. “That is the reason why it’s very useful to look at other galaxies.”

Mills is attempting to build up the sample of galaxy centers that can be studied in detail. This can, in turn, help us better characterize the center of our own galaxy. In the nucleus of the Milky Way, there is not much star formation and no AGN (check out this -astrobite for a discussion of AGN in different galaxy types). But by building up a sample of galaxies that exhibit either lots of star formation or an AGN (or both!), she can draw better conclusions about the dynamics at play in the center of a galaxy. Star formation and AGN can start to be disentangled, and clues about how they talk back and forth to each other begin to emerge.

One reason Mills is excited about this work is because of its potential to illuminate how most of the stars in the universe formed. While the metallicity in the galactic center is different than in primordial gas, the physical conditions of the gas (temperature, turbulence, density, etc.) there could be very analogous to the conditions in which the first stars formed. “This environment…is actually in many ways quite similar to the sort of typical conditions of these high redshift galaxies,” says Mills. “And then this becomes a question of not just do stars form weirdly in the center of our galaxy, but is there something we can understand about how stars are forming here that was actually the normal mode of star formation in the past?” The centers of galaxies can also give clues about what will happen as the metallicities in the disks of galaxies grow. This means that we can potentially use these regions to study both the past and the future.

There was a time when Mills’ future was uncertain, though. Going into college, she knew that she wanted to be an astronomy major. However, that wasn’t her only interest. She took a year in which she stopped doing astronomy and started working towards a Bachelor of Fine Arts in painting. After getting accepted into the program she wanted and finding a studio, she realized that it wasn’t as fulfilling as she had hoped. She was drawn back to astronomy and the challenge that it gave her. She still maintains her artistic side and enjoys spending a lot of time thinking about the visuals that go into communicating science. When asked about advice she has for other students who are considering pursuing a different field or interest, Mills emphasized the importance of spending time giving your alternative plan a fair shot. “For me, it was very important just to fully try it out. There were those couple of semesters where I really just stopped taking the physics and astronomy courses and just went all in on trying to do art. In the end, there’s nothing wrong with keeping multiple interests going at the same time, but I think it’s important to give something that you think you might want to do a fair go,” she says.

She has found that putting time and work into different activities is the best way to discover how you truly feel about them. Public speaking is one example. Mills says that, despite being very excited about giving talks now, she used to be very stressed out about it. Over-preparing for a physics presentation she gave in undergrad changed this for her. “I suddenly realized that, when I was giving that talk, I knew it so well and knew exactly what I was going to say, so I could for the first time start to think on my feet about how I was saying it,” she says. “And it went really well. It’s really important for me to acknowledge my progress as something that is the result of putting work in and something that is totally attainable.”

Find out more at Professor Elisabeth Mill’s plenary talk, “Journey to the Center of the Galaxy: Following the Gas to Understand the Past and Future Activity of Galaxy Nuclei” on Tuesday, June 11 at 4:30 PM at #AAS234.