This LGBT STEM Day, we celebrate LGBTQ+ astronomers and astrophysicists who have made an impact on the field. While there is a growing community of queer astronomers today, we focus here on scientists who worked primarily before the 21st century and who have passed away. For current queer researchers in astronomy and related fields, check out the Astronomy and Astrophysics Outlist, the LGBT+ Physicists Outlist, and 500 Queer Scientists. Also check out last year’s post on best practices for LGBT+ inclusivity in STEM.

The historical (and current) intolerance and persecution of queer people means that many queer astronomers were not open or public about their sexuality, or were denied entrance to the field in the first place. These are some of the few figures in astronomy who were openly queer or now recognized as queer posthumously. We recognize their lives, research contributions, and impact on queer visibility and inclusivity in astronomy. 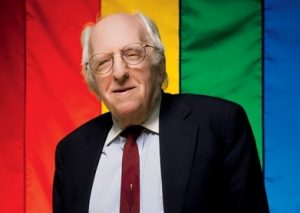 
Dr. Frank Kameny was an American astronomer-turned-gay rights activist, after being forced to leave the profession due to his sexuality. Kameny earned his PhD in astronomy from Harvard in 1956, where he studied under the eminent stellar astronomer Cecilia Payne-Gaposchkin. He conducted photometric  studies of variable stars, taking over 500 observations of yellow semiregular variables and RV Tauri stars. After a stint teaching astronomy at Georgetown, Kameny was hired in 1957 as an astronomer for the US Army Map Service (which compiled military maps used as a tool of US imperialism). Soon after, Kameny’s superiors accused him of being gay, and Kameny refused to respond to questioning. He was fired and banned from any future federal employment.

After multiple failed appeals that took the case to the Supreme Court, Kameny turned to gay rights activism. He demanded that President Kennedy end the government purging of gay employees, known as the Lavender Scare, and in 1965 organized the first White House protest by gays and lesbians. He is also known for successfully fighting to remove the designation of homosexuality as a mental illness, and for coining the famous “Gay is Good” slogan. Kameny is considered one of the most significant figures in the American gay rights movement. Though he was denied the opportunity to continue astronomy research, the observations from his doctoral work mark his lasting contribution to the field. These data, which turned out to be the only observations of these variables during the time period, were recently “rediscovered” and added to the international database of variable stars. Kameny passed away in 2011 of heart disease at age 86, after continuing his activism until his final weeks.

Dr. Neil Divine, a gay 20th century American astrophysicist, made important contributions to the studies of star formation and interplanetary bodies. For his PhD thesis at Caltech in 1965, he built the first numerical model of the evolution of helium stars, before they were even confirmed to exist (which was “programmed for a large computer” in 1960s terms). Divine spent the majority of his subsequent career at Caltech’s Jet Propulsion Laboratory (JPL). There he studied the radiation belts around outer solar system planets and the dust environment around Halley’s Comet. One of his biggest contributions was the characterization of populations of meteoroid environments, small interplanetary bodies such as asteroid fragments. His 1993 paper in the Journal of Geophysical Research outlines a numerical model for characterizing meteoroids based on their mass and orbital properties. Divine passed away from AIDS-related complications in 1994, at age 55. 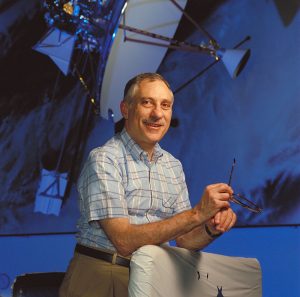 Dr. James Pollack was a gay 20th century NASA researcher, who established himself as a prominent figure in atmospheric science. Pollack obtained his PhD in Astronomy from Harvard in 1965, where he was the first graduate student of astronomer and science popularizer Carl Sagan. Pollack was open about his sexuality and had the support of Sagan; once when Pollack’s partner had trouble obtaining health services at the school, Sagan stepped in to advocate for the couple. After graduating, Pollack continued to work with Sagan on the atmospheres of Venus and Mars, publishing a classic 1969 paper on atmospheric thermal energy transfer, before moving to NASA Ames. There he played key roles in many NASA missions, including Mariner 9, Viking, Voyager, and Galileo. Pollack and his students are known for developing the Mars General Circulation Model (GCM), which was based on data from the early missions and informed landing sites on the later missions.

With Sagan and three other scientists, Pollack introduced the term “nuclear winter” in a 1983 Science paper. They modeled the effects of nuclear war on the terrestrial climate and atmosphere, finding that dust and smoke from nuclear aftermath could result in an immense loss of solar light, subfreezing temperatures, and the rapid global transport of radioactive particles (though this proved quite controversial). Pollack is also credited, alongside collaborators, with the first model of the formation of gas giant planets via core accretion; their now-classic 1996 paper was published posthumously. Pollack passed away in 1994 of spinal cancer at age 55, survived by his partner Bruce Hassell (described as a “longtime friend” in his AAS obituary). Pollack now has a Mars crater named after him. 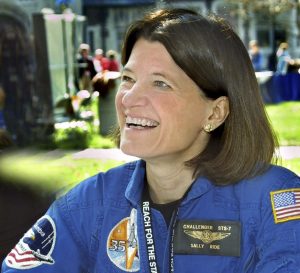 Dr. Sally Ride is the first known queer astronaut, though her sexuality wasn’t public until her death. Ride received her PhD in Physics from Stanford University in 1978, for her thesis on the interaction of X-rays with the interstellar medium. Just a few months before her defense, Ride found out she had been selected for NASA Astronaut Group 8. In 1983, she flew to space as a crew member on the shuttle Challenger for NASA’s seventh space shuttle mission, becoming the first American woman and youngest person to go to space. She later served on the commissions investigating the Challenger and Columbia disasters, the only person to serve on both commissions.

Though Ride is primarily known as an astronaut, after her time at NASA she continued her research career as a professor of physics at UC San Diego. There she worked on free-electron lasers and other nonlinear beam-wave interactions. One highly cited 1995 paper derived analytical expressions for radiation from Thomson scattering, by bouncing intense lasers off electron beams. During this time, Ride started the company Sally Ride Science and authored many children’s science books with her partner, professor of psychology Tam O’Shaughnessy, though they kept their relationship private (in part due to fear of losing corporate sponsorships). Ride passed away in 2012 at age 61 due to pancreatic cancer, and in her obituary O’Shaughnessy publicly revealed their relationship. Ride remains the only known queer astronaut.

If you know of other queer figures in astronomy history to add to this list, please comment below or get in touch with us!