Title: Was the Sun a Slow Rotator? – Sodium and Potassium Constraints from the Lunar Regolith

Journey to the Sun’s Past

Throughout the solar system’s history, the frequency of flares and eruptive events from the Sun have had a strong effect on the development of the inner planets, from the top of their atmospheres right down to their surfaces. The amount of eruptive events the Sun produces just so happens to be closely related to the rate at which it rotates. Therefore, to understand how planets like the Earth came to be, it is incredibly important to understand the Sun’s rotation during the early stages of the solar system’s development. Previous studies have attempted to do so by considering other sun-like stars. However, today’s authors have found answers by looking much closer to home.

The Moon, Earth’s only natural satellite, is a surprisingly ideal place to look for clues about the history of solar activity. The lack of a thick atmosphere causes solar eruptions that reach the Moon to strip material from its surface, leaving behind an imprint that can be used to understand the Sun’s tumultuous past (but more on that later).

A Model for the Early Sun

Before the authors of today’s paper dove into how the Moon is an ideal place to look for evidence of past solar activity, their first challenge was to model the Sun’s activity over its entire lifetime. As mentioned previously, the primary cause for depletion of material from the lunar surface is from space weather events, most notably coronal mass ejections (CMEs) which occur when large volumes of material are ejected from the Sun during a solar eruption. A cartoon depicting this is shown in Figure 1. 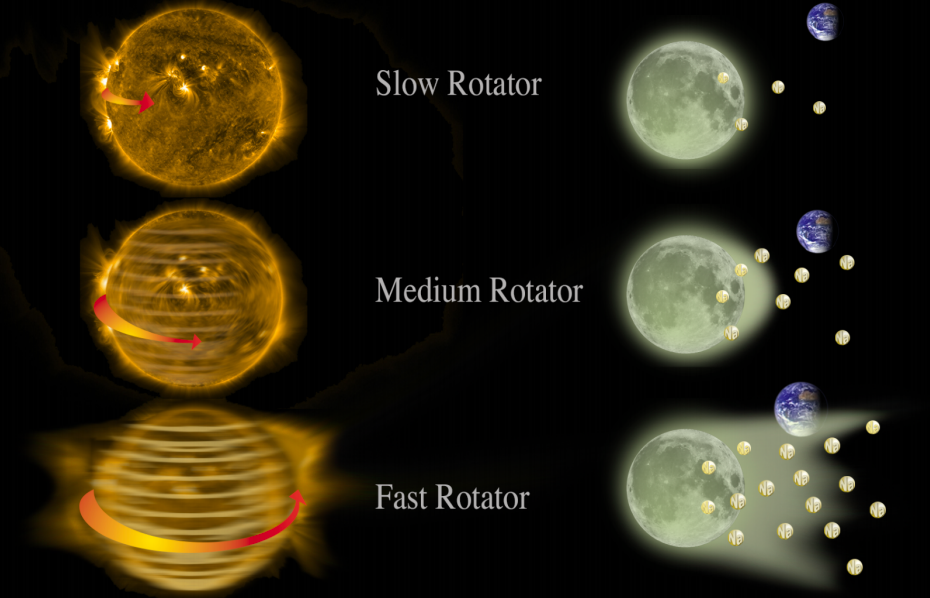 Figure 1: Cartoon showing the relationship of solar rotation rate with the amount of material lost from the surface of the Moon. Figure 4 in the paper.

The authors considered three rotation classes for their model of the early Sun: slow rotators, medium rotators, and fast rotators, which correspond to rotation rates observed for sun-like stars in a previous study. To construct a flare/CME relation, they looked at data from both the Kepler Space Telescope and Earth’s geological record. The Kepler Space Telescope observed several sun-like stars in a single patch of sky over the span of 4 years and was able to characterize the activity of sun-like stars with respect to their rotation. An approximately linear flare-rotation relation was found, with faster rotators being more active than slow rotators. CME’s are also always associated with a flare, however not every flare produces a CME especially at low energies. The authors consider only the most energetic flares, and therefore assume a 100% CME-flare association.

Their fully constructed CME-frequency for the entire Sun’s lifetime is shown in Figure 2. Regardless of initial rotation rate, all scenarios converge to the same CME/flare rate, as shown in the figure. 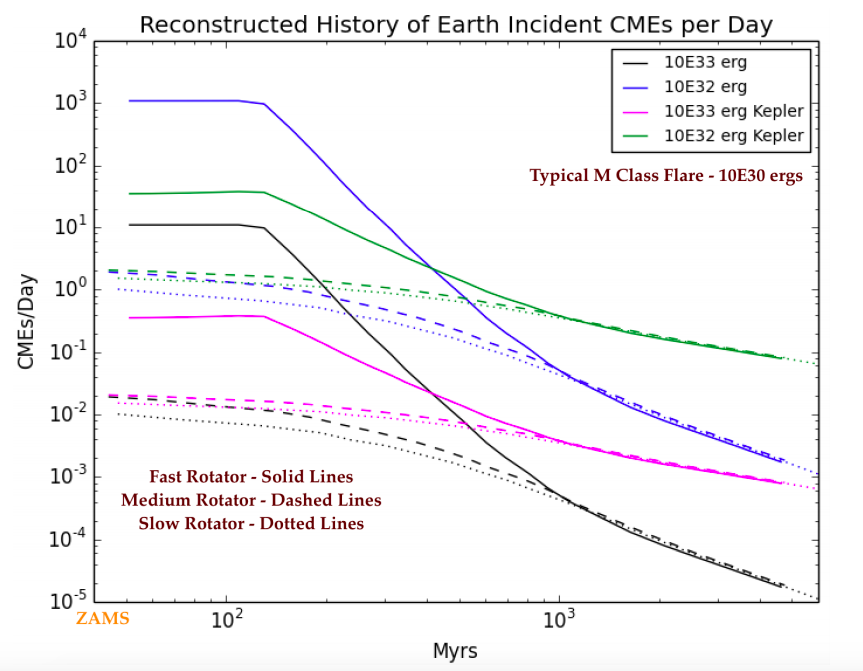 With their model CME frequency history in hand, the authors could now dig deeper into how solar activity could’ve affected the present-day composition of the moon. The Moon is a surprisingly ideal place study past solar activity due to the cataclysmic event that formed the Earth-Moon system.  The most widely accepted theory for our Moon’s formation involves a large mars-sized object, Theia, which crashed into the primordial Earth some 4 billion years ago. At the time of the moon’s formation, the Earth and Moon had the same surface composition, having been formed from the same mass of rock. Thanks to our thick atmosphere and magnetic field, Earth has been able to hold onto a lot of the material on its surface since its formation. The Moon, however, is far too small to have an atmosphere. Therefore, material on the surface is constantly being stripped off due to many factors, the most effective being space weather events. To be able to accurately assess the difference between material on the Earth and Moon, the authors focused on two volatile elements on the lunar surface, sodium and potassium. These elements have moderately lower abundances on the Moon than on Earth, but are abundant enough on the Moon to be accurately measured.

Understanding the initial rotation rate of the Sun is necessary for understanding the evolution of planets in the inner solar system. Many other mechanisms were used to try and explain the degree of sodium and potassium depletion, namely the amount of exposed vs. buried material in the Moon’s surface, meteorite impacts, volcanism, and magnetism (both from the Earth and the Moon itself). However, none of them would fully account for the amount of depletion observed. In today’s work, the authors found that a slow rotator model for the Sun best explains the current amounts of volatile elements present on the surface of the Moon and puts yet another piece into the billions-year long puzzle of our solar system’s history.

I am a graduate student at the University of Hawaii at Manoa Institute for Astronomy, where I study the Sun and Low-mass stars. My current research focuses on how we can use detailed models of solar eruptions to understand eruptions on other low-mass stars. In my free time I enjoy rock climbing, painting, and eating copious amounts of mac and cheese.

What happens when you throw a satellite at the Sun?